CST
translation
Source:SMM
SMM7 March 7: the output of zinc ingots from Guangdong warehouse decreased slightly in June compared with the previous month, which is in line with expectations. Through our research, we know that the consumption margin in the lower reaches of June has weakened, especially in the Guangdong market, which is dominated by die-casting zinc alloy consumption, and the overall demand is still weak. 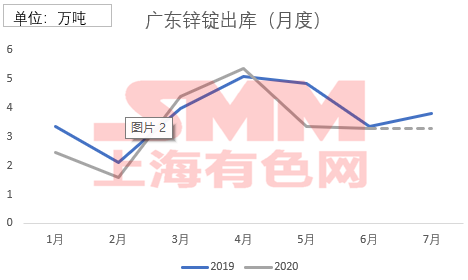 From the perspective of statistical data, the month-on-month decline in the output of zinc ingots from Guangdong in July is not large, and we think that there are the following reasons: 1. The overhaul of Guangxi smelter affects some constants, resulting in an increase in the volume of goods sent to the warehouse by the traffic commander, resulting in a decrease in the downstream of the plant. 2. There is a large production gap in the alloy plants of Hunan smelters, so it is necessary to purchase zinc ingots to ensure production, while the market price in Guangdong is lower than that in East China as a whole, so it is driven out of the warehouse by the increase in the quantity of purchase in Guangdong market. 3. At present, the consumption of die-casting zinc alloy is still low, and the terminal customers of large die-casting factories in Guangdong are all involved in exports, but the current epidemic situation overseas is still serious. although economic activities are restored in some areas, it still takes time for the actual demand to recover, and the overall demand is poor. 4. Galvanized plate boosts part of the demand, and the orders of pipe-plating enterprises are relatively good, mainly reflected in infrastructure, real estate and agricultural pipes. With the improvement of production and sales of automobiles and household appliances, orders also increase. Galvanized iron towers, structures and other components to maintain a high start-up.

In July, the off-season of traditional consumption is approaching. At present, the consumption of die-casting zinc alloy, which accounts for more than 60% of the Guangdong market, has not improved, while orders such as plated pipes have also declined, but there are still purchases from Guangdong in the lower reaches of Hunan and Fujian, which will drive a certain amount of storage, so on the whole, the output of Guangdong in July may not change much.