CST
translation
Source:SMM
SMM7 March 3: in late June, the smelters overhauled in Guangxi and Yunnan resumed production one after another, and Jinding zinc industry resumed production in June after the completion of the technical transformation. On the whole, the output of the smelters mainly sent to the Guangdong market showed a state of restorative growth.

SMM7 March 3: in June, Guangdong market arrival volume rebounded at a low level, in line with our previous expectations. In late June, the smelters overhauled in Guangxi and Yunnan resumed production one after another, and production resumed in June after the completion of the technical transformation of Jinding zinc industry. on the whole, the output of the smelters mainly sent to the Guangdong market showed a state of restorative growth. During the month, the price gap between Shanghai and Guangdong narrowed to about 80 yuan, and the willingness of smelters to send to Guangdong has improved. Individual smelters have actively cashed out goods and issued inventories in the factory area. The weekly ratio of arrivals in the Guangdong market has continued to improve in the past two weeks, and the overall arrival volume has increased by nearly 7000 tons compared with May. 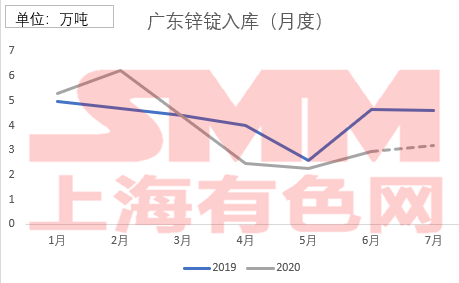 In July, the production of the smelter is relatively stable, but some of the supply of the smelter will still be diverted to Hunan, Fujian and other places, which will affect a certain amount of delivery. at present, the price difference between Shanghai and Guangdong is still 100 yuan, and the consumption of die-casting zinc alloy in Guangdong is still low. It is difficult for smelters to realize their shipments. We think that the overall arrival volume in July may increase, but the increment is limited.