CST
translation
Source:SMM
During the day on Friday, non-ferrous metals rose generally, of which Shanghai nickel unexpectedly rose 3.01%, but the weak fundamentals of the nickel market have not improved, and domestic demand in the lower reaches of stainless steel from July to August is lacklustre.

SMM7 March 3: on Friday, non-ferrous metals rose generally, of which Shanghai Nickel unexpectedly rose 3.01%, but the weak fundamentals of the nickel market have not been improved. With the arrival of the off-season in the lower reaches of stainless steel from July to August, domestic demand is weak, lack of obvious optimism, and the industry is generally pessimistic about the late market. As for copper, according to SMM, the CSPT group held the latest third-quarter Floor price meeting online this morning and confirmed that the third-quarter TC/RC floor price was 53 US dollars / ton and 5.3 cents / lb, while the SMM June copper concentrate index was 51.71 US dollars / ton. Due to the great uncertainty of epidemic factors in the second quarter, the floor price was not determined at the quarterly meeting of the group, while the floor price determined in the third quarter was much lower than the US $67 / ton in the first quarter, objectively reflecting the tightening trend in the supply of imported copper concentrates. at the same time, the raw material supply situation in the second half of the year is still very grim. Shanghai and tin rose 1.13%. From a fundamental point of view, on June 27, the Burmese Central Committee for the Prevention and Control of the New Crown virus announced that the control of the epidemic in Myanmar had been extended to July 15, and the tension in the domestic tin mine is expected to continue. the amount of tin imported will remain at about 60% of the normal level in the short term. The tightening of production caused by tight mine supply is expected to support tin prices to some extent.

The black series generally rose, with threads up 1.4%, hot rolls up 1.21%, and iron ore up 0.67%. Steel inventory has accumulated this week, but SMM still believes that the data show that the electric furnace operating rate has fallen by 4.24% this week, and the later operating rate will continue to fall, with the blast furnace operating rate of 90.16%, down 0.13% from last week. The overall production of building materials is likely to decline in July, and some steel mills have started the operation of turning hot metal to hot coil as a result. At the same time, Tangshan production restrictions are also stimulating the strength of the disk, waiting for the gradual return of demand, building materials are still strong operation. Hot rolling may also show a strong trend. Iron ore rose weakly under the conditions of production restrictions and increased port inventories, but in the later stage, although steel demand continued to release, iron ore demand was also supported, mainly short-term or narrow fluctuations.

Crude oil rose 1.05% in the previous period. Oil prices in the outer disk fell on Friday, giving up earlier gains as renewed outbreaks of new crown pneumonia in the United States and other parts of the world fuelled fears that the recovery in fuel demand could stall. ICE9 monthly Brent crude futures fell 1.1% to $42.68 a barrel. Us crude oil futures fell 1% in August to $40.21 a barrel. Brent crude is up 5% this week, while us crude is up 5.3%. 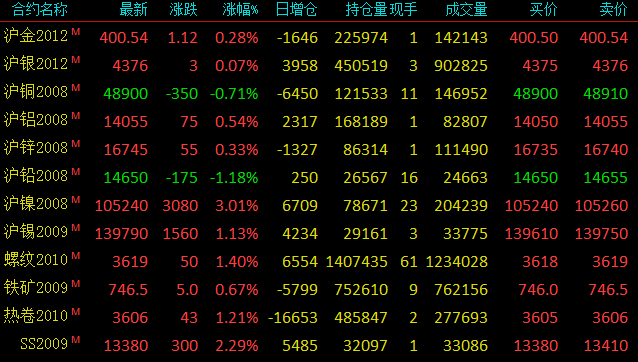 In terms of capital flows, chemical, non-ferrous and iron and steel plates were all stained with rain and dew, attracting 330 million gold respectively, Shanghai nickel rose sharply, and it was the most beloved of funds, with 943 million capital support alone. Stock index futures soared for three consecutive days, IF and IH attracted a lot of capital attention, but the high level of copper in Shanghai, more than 700 million funds quickly left the market.

Copper: today, the main force of Shanghai copper opened at 49310 yuan / ton in the morning, and the center of gravity of copper price stabilized at 49320 yuan / ton after the opening, and then short positions led to a brief rise in copper prices, reaching a daily high of 49390 yuan / ton. At this time, the bulls gradually reduced their positions and left the market, and the market continued to decline, falling all the way to the lowest point of the day, 48840 yuan / ton. In the early afternoon, the price of copper rebounded to close at 49060 yuan / ton. Copper prices fluctuated upwards in the afternoon, leaving the market around 49140 yuan / ton. The market fell again, and finally closed at 48900 yuan, down 350yuan / ton, down 0.71%. Intra-day 08 contract reduced positions by 6450 to 122000, mainly for long positions; trading volume changed little; Shanghai Copper 07 contract reduced positions by 5675 to 38000, mainly for long positions. Trading volume decreased by 4000 to 25000 lots. The weekly increase of money supply M1 and M2 announced in the United States today is limited, the effect of economic stimulus measures is gradually dissipating, the pace of US economic recovery is slowing, the downward pressure is increasing, and the market macro sentiment is cautious, which forms a certain resistance to the upward price of copper. From a fundamental point of view, the impact of the South American epidemic on Chilean copper production has not been obvious. The Chilean Copper Commission (Cochilco) showed that Chilean copper production increased by 3.7% from January to May 2020, easing the pessimistic mood of tight supply the day before yesterday. Social inventories rose 37300 tons month-on-month to 199300 tons on Wednesday, the first increase in recent months, leading bulls to cut positions and driving copper prices down, according to a survey by SMM. Today, Shanghai copper overcast, MACD red column narrowed, but below there is still a 5-day moving average to support the bottom, copper prices upward pattern has not been destroyed. Wait for the outer disk guidelines in the evening to test whether the bulls can continue to make efforts to help copper prices gain momentum again.