SMM7 March 3: the black system as a whole suppressed and then rose this week. On Monday, the first trading day after the Dragon Boat Festival, due to the spread of the overseas epidemic, stock markets and crude oil in Europe and the United States generally fell sharply, which will have a negative impact on the trend of black goods. And before the holiday announced steel fundamentals data weakening, steel production rising, inventory accumulation, apparent demand decline. Iron ore port inventory from decline to rise, pressure port volume increased significantly, indicating that the most tight stage of iron ore supply may have passed, iron ore prices are also facing adjustment. After that, due to the strong manufacturing PMI data, coupled with the central bank cut re-lending, rediscount interest rates and other macro positive factors and production restrictions boosted, black stabilized and fluctuated in a narrow range. By Friday's day close, iron ore was at 746.5 yuan / ton, down 3.18% from last week's close of 771 yuan / ton, threaded at 3619 yuan / ton, down 0.03% from last week's 3620 yuan / ton, and hot coil at 3606 yuan / ton, up 0.06% from 3604 yuan / ton last week. 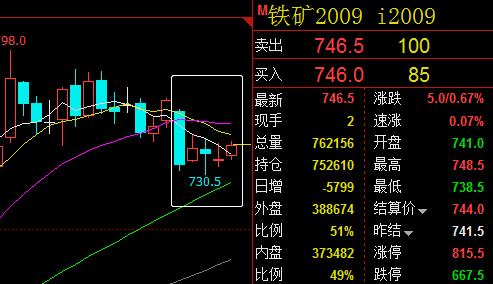 Iron ore may continue to fluctuate in a narrow range next week. The rebound of iron ore port inventory superimposed the impact of production restrictions in Tangshan area, the upward force of iron ore is small. However, considering that terminal downstream demand will continue to be released in July, there may still be some boost for late lumber and iron ore prices.

Rebar may strengthen slightly next week. Although inventory began to accumulate, SMM still believes that this week's data show that the electric furnace operating rate has fallen by 4.24%, and the later operating rate will continue to fall, with the blast furnace operating rate of 90.16%, down 0.13% from last week. The overall production of building materials is likely to decline in July, and some steel mills have started the operation of turning hot metal to hot coil as a result. At the same time, Tangshan production restrictions are also stimulating the strength of the disk, waiting for the gradual return of demand, building materials are still strong operation.

The short-term shock of hot rolling may be on the strong side. This week, the hot-rolled social treasury was + 2.17%, ending 13 consecutive declines and becoming a tired bank. On the one hand, the trading volume and days of the hot roll market this week decreased compared with the previous period, and the market output decreased; on the other hand, most steel mills delivered goods steadily, resulting in increased social pressure and increased inventory. However, the current lack of specifications in East and South China market is still relatively common, demand continues to release, market sentiment is cautiously optimistic and other factors, even in the case of slow inventory growth, SMM analysis believes that market prices do not have significant downward conditions, is expected to maintain shock operation in the short term.

Tangshan extends production cut at steel mills to June 3 on pollution woes
The government of Tangshan in Hebei province announced on May 31 that they will. extend the termination date of the heavily-polluted weather alert from midnight on May 31 to midnight on June 3

Baotou Steel coke output over 4 million mt amid short coal supply
Baotou Steel said its coking plants have produced 4.43 million mt of coke from January to November although there have been a shortage of good-quality coking coal supply.