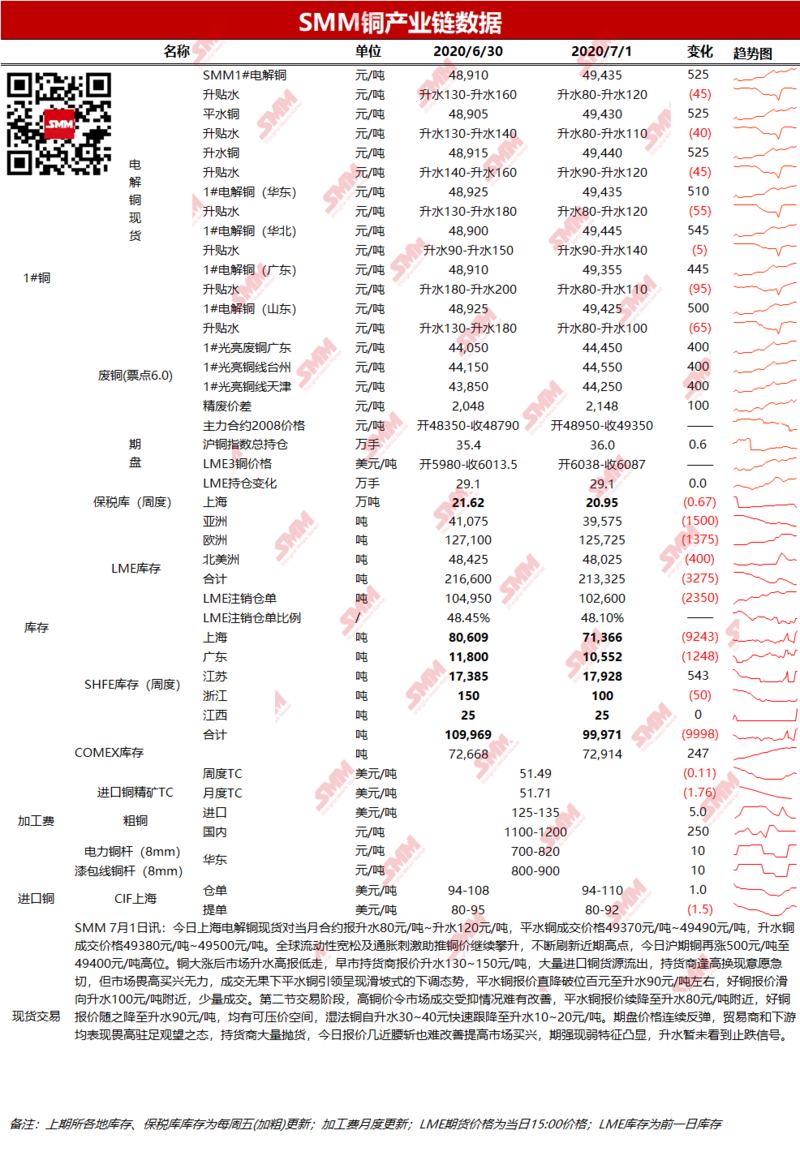 Macro: 1) according to market news, OPEC crude oil production fell by 1.93 million b / d in June to 22.69 million b / d, the lowest level since 1991. 2) EIA crude oil stocks in the United States fell by 7.195 million barrels to 533.5 million barrels in the week to June 26, better than the market expected decline of 710000 barrels and better than the previous increase of 1.442 million barrels. U.S. crude oil inventory changes recorded a decline after three consecutive weeks of growth and the lowest since January 3 (26 weeks). 3) China's Caixin manufacturing PMI recorded 51.2 in June, higher than the market expectation of 50.5 and also higher than the previous value of 50.7, the highest since December 2019. Fundamentals: 1) the president of the (Antofagasta Minerals) Confederation of Trade unions of Antofagasta Mining Co., Ltd., said that seven unions representing about 80% of the copper workers and contractors at the Chilean copper mine were discussing whether to formally request the government to suspend production of all copper mines in Chile for 14 days. To stop the spread of new crown pneumonia among workers. Scrap copper in Guangdong was quoted for 44300 yuan / ton ~ 44600 yuan / ton on July 1, up 400 yuan over the previous trading day, with a price difference of 2148 yuan / ton and a month-on-month increase of 100 yuan. A meeting on the implementation of national standards for recycled copper and aluminum raw materials was held on July 1, indicating that the implementation of standards and relevant regulatory policies are being accelerated. From this point of view, for the time being, it is still using the approval system to import scrap copper, while many small and medium-sized enterprises have almost run out of approvals and need to eagerly wait for new approvals to be issued. 3) on July 1, the warehouse receipt for imported copper quoted US $94mur110 / ton, the average price increased by US $1 / ton compared with the previous day, and the bill of lading quoted US $80mur92 / ton, with an average price of US $1.50 / ton lower than that of the previous day. The LME0-3 discount is $10.50 / ton, and the import loss is around 200 yuan / ton. Yesterday morning, the outer plate led the rise, the import price fell again and the loss expanded, the inquiry in the foreign trade market was deserted, and it was difficult for the transaction situation to improve. At present, the offer price of the second brand bill of lading for arrival in Hong Kong in late July is around US $95 / ton, and there is still room for price reduction. Some traders expect to have the opportunity to compare the price, and choose to hold the goods and wait for the price to be quoted. Warehouse receipt prices are still strong, mainly due to the limited supply of goods, there are a small number of high-price transactions. 4) inventory LME copper inventory decreased by 3275 tons to 213325 tons on July 1, while copper warehouse receipt inventory increased by 24 tons to 36787 tons in the previous period. 5) spot East China: on July 1, the spot contract of electrolytic copper in Shanghai was quoted as rising 80 yuan / ton to 120 yuan / ton, down 45 yuan / ton compared with the previous trading day. On the spot side, copper prices have continued to rise recently, downstream purchases are afraid of heights, and imports of copper have been declared one after another, and it is expected that the rising water will continue to decline. It is expected that the spot water will rise to 50 RMB80 / ton today. South China: on July 1, the spot price of electrolytic copper in Guangdong province was quoted as a rise of 80 per cent for the current month's contract, with the average price falling by 95 per cent. Inventory in Guangdong has increased for three consecutive days, and the current inventory has increased by about 6,000 tons, or 55%, compared with that before the festival. Affected by this, the rising water in Guangdong has also fallen sharply for three consecutive days, and there is no price difference between the two places after continuous price cuts. However, due to the expectation that stocks will continue to increase in the future, the market will continue to be bearish and bearish, so the mood of receiving goods downstream is general, and trading was still poor yesterday. We expect that there is still room for decline in rising water today. Copper price and forecast: last night, Lun Copper closed at 6056 US dollars / ton, up 0.28%. The trading volume was 22000 lots, and the long positions increased by 2154 to 293000 lots. The Shanghai Copper 2008 contract closed at 49180 yuan / ton, down 0.34%, the trading volume was 74000 lots, and the short positions increased by 559 to 130000 lots. Yesterday, Lun copper explored a high of $6094 / tonne in the afternoon, then copper prices began to fall, and copper prices continued to step back to confirm in the evening, but remained above the $6000 mark, indicating that bulls still have strong confidence. Affected by the pullback of the outer disk, the Shanghai copper night market opened low at 48980 yuan / ton, and then maintained at 49000 yuan / ton first-line concussion. On the macro side, the United States announced a big increase in ADP employment data yesterday and revised the value before May from negative to 3.065 million people. The PMI data of the United States and Europe are also being repaired month-on-month. The PMI data of China's Caixin manufacturing industry recorded 51.2, the highest level since December of 19 years. In terms of fundamentals, Chile announced a sharp reduction in the number of on-site workers yesterday, and the Chilean copper workers' union once again called on the government to suspend operations at all copper mines for 14 days, continuing to raise concerns about copper supply and good for copper prices. It is expected that today's outer disk 6080Mui 6150 US dollars / ton, inner disk 49400Mill 49800 yuan / ton.

Peru Declares Emergency to End Protest near Las Bambas Copper Mine
Peru declared a 30-day state of emergency in Andean region to end a protest by residents near Las Bambas copper mine.