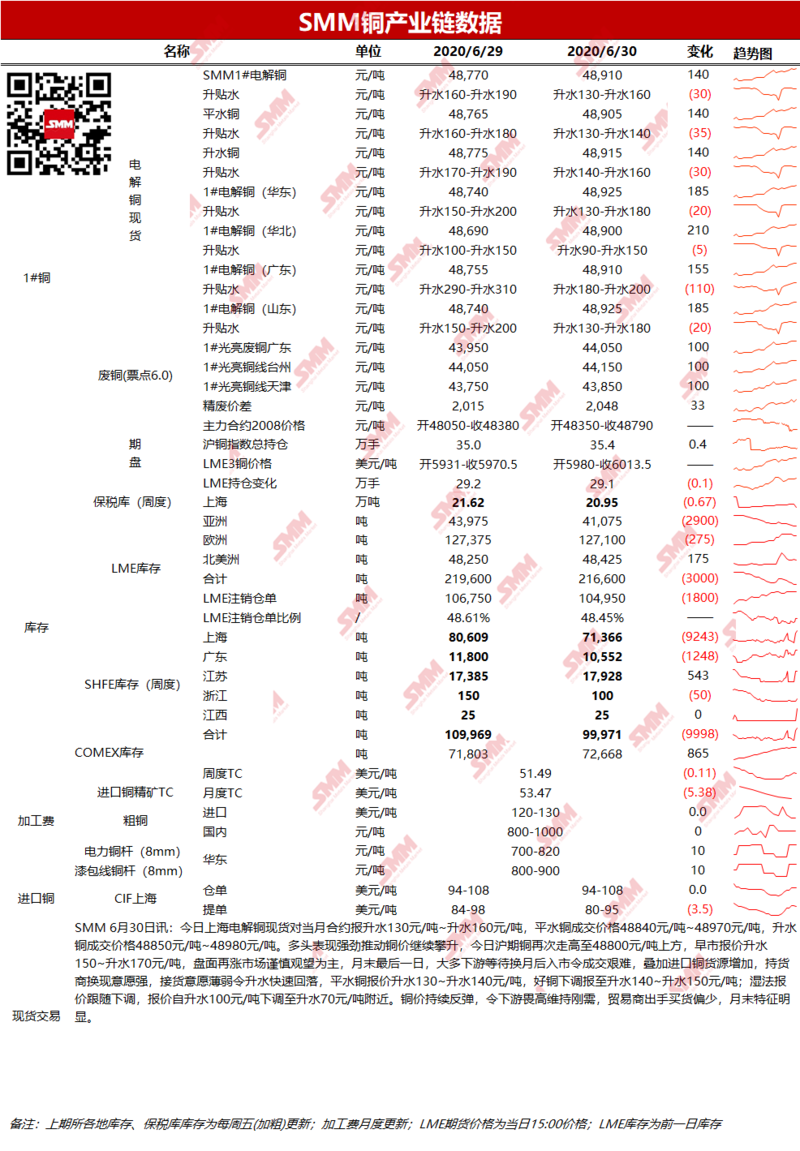 Macro: 1) according to four OPEC + sources, as global oil demand recovers and oil prices rebound from lows, OPEC and Russia are likely to relax previous record production cuts from August. According to sources, OPEC and Russia have not yet discussed extending the production reduction agreement until August, which means that the scale of production reduction is likely to be reduced to 7.7 million barrels per day. California in the United States reported at least 7418 new confirmed cases of coronal pneumonia, the largest one-day new cases since the outbreak of innovative coronal pneumonia, and some counties have not yet reported new cases. Texas in the United States reported 6545 new confirmed cases of crown pneumonia, a total of 159041 cases, the number of new cases reached a one-day high. [bearish] 3) the central bank recently issued a paper saying that it has decided to cut the re-lending and rediscount interest rates from July 1. Santiago, June 30 (Xinhua) Chile's manufacturing output plunged 13.3% in May as measures taken to curb the spread of the coronavirus closed many businesses and forced more and more people to enter a blockade, Chile's National Bureau of Statistics said on Tuesday. 2) the price of scrap copper in Guangdong is 43800 yuan / ton ~ 44100 yuan / ton, which is 400 yuan higher than that of the previous trading day. The price difference of fine copper scrap is 2015 yuan / ton, and the month-on-month expansion is 190 yuan. The import rules of recycled copper are pending from July to July, but there is no official statement on the detailed documents for actual import, and waste enterprises have not yet received the relevant latest notices. The delay in the import of recycled copper has basically become a fact. Many views in the market have turned to the expectation that recycled copper import standards will not be used until September, in conjunction with the introduction of the new waste consolidation law on September 1, but they are all expected and have not yet been confirmed. 3) the warehouse receipt for imported copper on June 30 quoted US $94mur108 / ton, with the average price unchanged from the previous day; the bill of lading quoted US $80,000,000 / ton, with an average price of US $3.50 / ton lower than the previous day. The LME0-3 discount is 10 US dollars / ton, and the import loss is around 150 yuan / ton. Yesterday, the activity of the foreign trade market was still not high, and the overall performance of the transaction was light. Recently, traders' offers are mainly concentrated in the arrival bill of lading in mid-late July, which is not big compared with the monthly quotation of QP7. At present, the two-brand bill of lading is generally quoted at or above 98 US dollars / ton, while the mainstream fire bill of lading is about 95 US dollars / ton. However, because the price comparison in August has not yet been opened, superimposed concerns about the decline in domestic trade discounts, buyers are cautious to wait and see, there are few transactions in the market. 4) LME copper inventory decreased by 3000 tons to 216600 tons on June 30, while copper warehouse receipt inventory increased by 346 tons to 36763 tons in the previous period. 5) spot East China: on June 30, the spot contract of electrolytic copper in Shanghai was quoted as rising water 130 yuan / ton ~ 160 yuan / ton, down 25 yuan from the previous trading day. On the spot side, due to the continued rise in copper prices yesterday, there is a fear of heights in downstream purchases, and Shengshui is expected to pull back today. It is expected that the spot water will rise to 140 yuan per ton today. South China: June 30 Guangdong electrolytic copper spot for the month contract quoted water 180 Mu 200, the average price fell 110; Guangdong inventory continued to increase after the festival, mainly due to the increase in the transfer of goods, plus yesterday is the middle of the year settlement day, no matter traders or downstream purchasing desire is not strong, yesterday the holder continued to take the initiative to reduce the water delivery, just two trading days Guangdong Shengshui has been significantly reduced by 240 yuan / ton. Nevertheless, we expect that there is still room for further decline today, mainly because the volume of shipments will continue to increase, and the downstream operating rate is still low, and buyers are generally bullish on rising water. Copper price and forecast: last night, Lun Copper closed at US $6039 / ton, up 1.17%, trading volume was 20000 lots, short positions were reduced by 112 to 291000 lots; Shanghai Copper 2008 contract closed at 48930 yuan / ton, up 0.77%, trading volume was 55000 lots, long positions increased by 1627 to 126000 lots. The operating hub of copper prices continued to move up last night, with Lun Copper pulling back in the short term after a session high of $6050.5 / ton in the afternoon, but quickly turned its head and continued to rise in the face of market optimism, standing above the $6000 mark. Shanghai copper was driven by the rising trend of the outer disk to open high at 48950 yuan / ton, and then maintained a high shock, looking forward to the 49000 mark above. Federal Reserve Chairman Colin Powell said yesterday that the US economic recovery had reached a critical point, earlier than in his tone, but also stressed the importance of controlling the epidemic. In addition, China's official manufacturing PMI announced yesterday was 50.9, indicating that the domestic manufacturing sector continued to repair month-on-month, confirming the positive logic of consumption and positive for copper prices. It is expected that today's outer disk 6030 won 6100 US dollars / ton, inner disk 49000 won 49400 yuan / ton.