CST
translation
Source:SMM
SMM5 March 31: Guangdong zinc ingots out of stock in May are significantly lower than the same period last year and month-on-month. Of course, in our previous article, we have analyzed such a large base of zinc ingots out of April, which is mainly caused by inventory transfer (for details: [SMM analysis] it will be difficult to sustain the explosion of zinc ingots out of Guangdong in April). Under the circumstances that it is difficult to recover overseas demand in the short term, the decline in warehouse delivery in May is in line with our previous expectations.

SMM5 March 31: Guangdong zinc ingots out of stock in May are significantly lower than the same period last year and month-on-month. Of course, in our previous article, we have analyzed such a large base of zinc ingots out of April, which is mainly caused by inventory transfer (for details: [SMM analysis] it will be difficult to sustain the explosion of zinc ingots out of Guangdong in April). Under the circumstances that it is difficult to recover overseas demand in the short term, the decline in warehouse delivery in May is in line with our previous expectations. 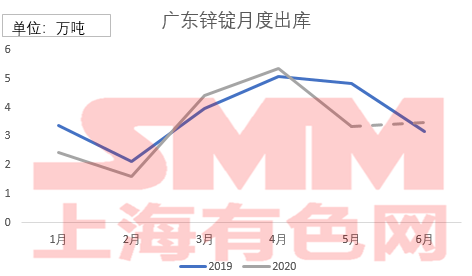 In May, the sector with the largest demand for zinc ingots in Guangdong, the demand for die-casting zinc alloy, was still in the doldrums, and the terminal foreign trade orders of alloy factories still did not improve obviously. although many overseas places began to resume work and production, the demand was not reflected in the short term. Previously, we thought that the improvement of overseas orders would not be confirmed until late May, and although the downstream construction increased slightly by late May, it was understood through investigation. Many alloy factories said that the current temporary increase in demand was mainly caused by the decline in the price of zinc ingots, and the terminal order slightly increased whenever the price fell, which led to the production of the alloy factory, which did not mean that there was a significant improvement in terminal orders, and it was difficult for alloy orders to improve in May.

Whether the demand for die-casting zinc alloy improves in June still needs to wait for overseas orders to recover. At present, alloy factories still rely on domestic orders to support part of their production. With the improvement of automobile production and sales, the automotive sector has driven consumption, and orders for smart locks have also increased. However, sanitary ware, hardware and zippers are still greatly affected by the decline in overseas orders. We believe that with the resumption of overseas production and economic activities, overseas orders may improve in the future, but there is still greater uncertainty, and we are cautiously optimistic about the improvement in demand downstream of the Guangdong market in June.