CST
translation
Source:SMM
The metal market has returned to calm this week, with most commodities fluctuating in a narrow range awaiting further guidance.

SMM5 March 26: the metal market has returned to calm since the beginning of this week, with most commodities fluctuating in a narrow range waiting for further guidance. Zinc, the domestic downstream due to strong infrastructure driven by the operating rate is at a high level, if there is no significant negative in the future, the zinc market still has a chance to rebound. According to the latest customs data, imports of zinc concentrates totaled 460600 tons (physical tons) in April 2020, an increase of 153600 tons (physical tons) over March and 156.9 percent over 2019. New monthly high imports [SMM data] in April imports of zinc concentrates hit an all-time high in May or lead stocks fell due to the influence of Peru. As of May 22, LME lead stocks reached 75275 tons, a weekly increase of 975 tons, rising for four weeks to the highest level since September 17 last year. At the same time, in the week ending May 22nd, the lead inventory in Shanghai reached 7401 tons, an increase of 190tons a week, a two-week increase. The average spot price of lead is the same as that of the previous day. The holder is actively shipping, the quotation is more than yesterday, and the import lead arrives at the same time, the downstream only needs to purchase, and mostly for the long order transaction, the bulk single market transaction still has not improved.

Black fell, iron ore fell 2.99%, thread fell 0.48%, hot coil fell 0.18%. Today, black iron ore led the rise a few days ago, showing a sharp decline. At present, it is mainly the negative side of the policy news of iron ore, coupled with a pullback after the rise of the disk, short-term iron ore from strong to weak. But in terms of fundamentals, there is nothing wrong with the demand side, and it has mainly followed the mature operation in the near future. If the demand for steel remains strong, iron ore should still have a chance to rebound in June. "check the details. 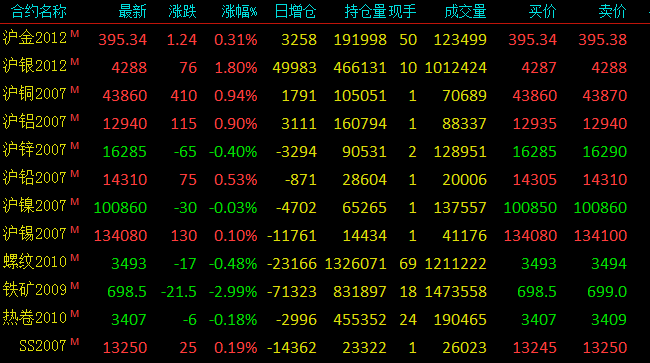 Commodities are popular on a large scale, and the commodity index has attracted more than 1.2 billion of capital. Asphalt, Shanghai crude oil and fuel oil go hand in hand with strong gold absorption capacity, and the crude oil plate has won the love of nearly 900 million funds. As a result of the increase in margin, white sugar has flowed into nearly 1.1 billion yuan. Iron ore fell 3 per cent, cut more than 60, 000 positions in a day, and suffered a sell-off of more than 1.2 billion of its funds.

A brief comment on SMM analysts on May 26th

Copper: today, the main force of Shanghai copper opened at 43750 yuan / ton in the morning, and the bulls entered the market to drive up the copper price to the highest point of the day, 43910 yuan / ton, and then fell back to 43750 yuan / ton into the market, until the copper in Shanghai made a horizontal concussion around this position before noon. It closed at 43740 yuan / ton in midday. In the afternoon, bulls continued to increase positions to support copper prices higher, the second touch the highest point of the day 43910 yuan / ton, and then the center of gravity stabilized at 43870 yuan / ton. Near the end of the day, both the forces of both sides fled, and the fluctuation of copper price increased slightly, and finally closed at 43860 yuan / ton, up 410 yuan / ton, or 0.94%. Today, the main contract of Shanghai Copper increased its positions by 1791 to 105000, mainly by bulls; trading volume decreased by 18000 to 71000. Today, Shanghai Copper operates in the range of 43680tel 43910 yuan / ton, the trend is relatively stable, basically maintaining the night market fluctuation range. Copper prices rebounded during the day, mainly driven by the upward price of crude oil, and affected by the further improvement in the contradiction between supply and demand of crude oil. Us oil and cloth oil increased today, providing some support for copper prices. But domestic investors have been cautious because of tensions between China and the United States, limiting the rise in copper prices to some extent. The fundamentals have not changed much. Today, Shanghai copper closed, once again standing on the 5-day moving average, the technical side of copper prices still have room to rise. In the evening, wait for the outer disk guidelines to test whether Shanghai Copper can stand at the 44000 yuan / ton mark.

Lead: during the day, the main 2007 contract of Shanghai lead opened at 14320 yuan / ton, the pressurized daily moving average was weak and fluctuated, during which it was as low as 14200 yuan / ton, and the bulls were not willing to leave the market. It finally closed at 14310 yuan / ton, up 75 yuan / ton, or 0.53%. The position decreased by 817 hands to 28640 hands. Shanghai lead newspaper closed the lower shadow Xiaoyin line, 5-day moving average support is still effective, medium-and short-term daily moving average trend is slower, fundamental support is weak, but the financial strength can not be ignored, the recent caution of high short selling.