5.26 minutes of the Bronze Morning meeting 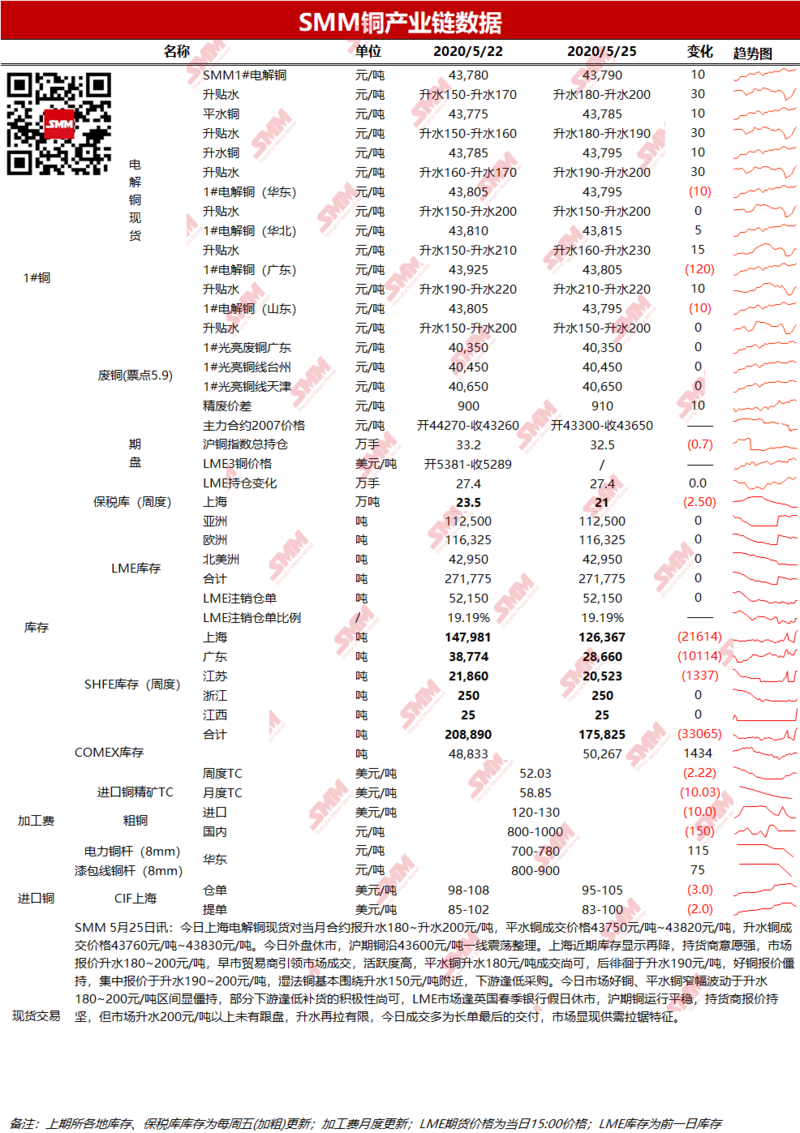 Macro: 1) Villeroy, governor of the Bank of France, hinted that the ECB is very likely to expand its emergency bond purchase program in response to the new crown epidemic. According to the International Energy Agency, global oil consumption has not peaked and a sustained economic recovery and low oil prices may bring global oil demand back to its original level or even higher. Germany's economy fell the most in more than a decade in the first quarter, with consumer and business spending falling sharply. The survey showed that the contraction in April was even more severe, and it was not until this month that there were some preliminary signs of bottoming out. Fundamentals: 1) the price difference of fine copper scrap on May 25 is 910 yuan / ton, an increase of 10 yuan compared with the previous month. (the number of votes is calculated as 5.9%). When the market was closed on May 25, some traders were worried about the risk and were cautious in receiving the goods, while after the copper price fell, the holder's willingness to ship also weakened, holding the goods to rise, the scrap copper market activity decreased, and on the demand side, downstream manufacturers maintained a large number of receipts, and in the case of active shipments by previous shippers, scrap copper stocks have been relatively sufficient, which is conducive to the continued recovery of scrap copper rod production. 2) the warehouse receipt for imported copper on May 25 is quoted at US $105 per ton, and the bill of lading is quoted at US $83 per ton. On that day, due to the fact that LME was closed on a bank holiday and the lack of price comparison guidelines in the foreign trade market, the activity of both buyers and sellers was reduced. Most of the consignors do not make quotations and want to wait for the opening of the outer order today; the buyer's inquiry is cold, showing that he has stopped to wait and see, and there is no transaction in the morning market. 3) the inventory of copper warehouse receipts in the previous period decreased by 3371 tons to 59954 tons on May 25. 4) East China: on May 25th, the spot stock of electrolytic copper in North China was quoted for a rise of 160yuan / ton to 230yuan / ton for that month's contract. Delivery of long orders ended yesterday, but given the low level of domestic inventories and still few shipments from smelters, Shengshui is expected to continue to raise prices today. It is expected that the spot water will rise to 170 RMB200 / ton today. South China: on May 25, the spot price of electrolytic copper in Guangdong Province rose by 210,220 to the contract for the same month. In the spot market, stocks fell sharply over the weekend, coupled with a drop in copper prices, and today's holders generally shipped at a high price. In early trading, there were few shippers and the market quotation was messy. As the number of shippers increased, the price began to unify. Overall, Shengshui is higher, the consignee is generally cautious, only maintain on-demand procurement, the overall trading atmosphere is general. Copper prices and forecasts: Lun Copper was closed for the summer bank holiday on May 25; the Shanghai Copper 2007 contract closed at 43650 yuan / ton, up 0.90%, with a trading volume of 89000 lots and a position reduction of 5247 lots to 103000 lots. Copper prices rebounded last night, recovering a small portion of their daytime losses, mainly due to positive news from Germany in Europe, raising the federal debt ceiling from 25 billion euros to 30 billion euros and gradually relaxing the blockade measures. The market expects the ECB to introduce more easing measures in June. However, at present, the overall macro mood is still cautious, the expectations of strong stimulus policies given by the two sessions have basically failed, the uncertainty of Sino-US relations has increased, and copper prices are expected to lack momentum in the short term. On the spot side, delivery of long orders ended yesterday, but taking into account the low level of domestic inventories and still few shipments from smelters, Shengshui is expected to continue to raise prices today. It is estimated that today Lun Copper will be US $5,320,380 per ton, while Shanghai Copper will be 43500won RMB 44,000 per ton.