CST
translation
Source:SMM
The market is closed today, and most of the metals in the inner market fluctuate in a narrow range, but there is a large rise and fall in Shanghai lead and nickel. Shanghai Nickel weakened sharply. Recently, due to worries about the economic downturn and the renewed pessimism in Sino-US relations, nickel prices have returned to fundamentals.

SMM5 March 25 News: Lun trading is closed today, most of the metals in the inner market fluctuate in a narrow range, but there is a large range of ups and downs in Shanghai lead and nickel. Shanghai Nickel weakened sharply. Recently, due to worries about the economic downturn and renewed pessimism in Sino-US relations, nickel prices have returned to fundamentals again. after the resumption of mining in the Philippines, SMM expects nickel ore exports to gradually resume in May, with total imports expected to be about 2.2 million nickel tons, an increase of 63% over the previous month, alleviating some bullish sentiment caused by lack of ore, but considering that port inventories are still low, there is no room for nickel prices to fall further under the support of nickel and iron costs. It remains to be seen in the later stage. Shanghai lead has a strong performance today, and fundamentally, at present, the production of primary lead is relatively stable. As for recycled lead, due to the release of the newly expanded capacity, the supply of waste batteries is becoming increasingly tight with the increase in demand, and it is still difficult to purchase low-cost waste batteries, squeezing the production profits of enterprises, but it is understood that at present, the raw material inventory of recycled lead enterprises can remain normal and is not expected to affect production. With the expansion of the internal / external ratio, the reduction of import losses, the opening of the import window and the expected entry of imported lead into the domestic market this week, the rise in lead prices is not expected to be sustainable.

The black system fell as a whole, the rebar fell by more than 1%, and the iron ore also fell high. The market's expected window on policy has come to an end. Judging from last week's fundamental indicators, it still maintained high supply, high depot and high surface demand, and the market reaction was also relatively optimistic on Thursday. The emotional inflection point mainly comes from the expectations of the two sessions on economic growth targets and fiscal policies. At present, the high demand for threads benefits from the pre-seasonality and rush schedule, but in the past week, rainy weather began to appear in South China or have an impact on demand. In the context of high supply and high inventory, marginal changes in demand bring pressure on high meters, short-term steel slightly pullback, follow-up attention to the maintenance of demand.

Crude oil rose 0.37% in the previous period. Demand in the international oil market has rebounded as the traditional summer driving season approaches. By the second week of May, demand for petroleum products had rebounded to more than 16.5 million barrels a day. This is still nearly 20 per cent below the normal level at this time of year, but it is a positive sign for oil producers and refineries. Although these factors are unique to the United States, the United States has been the biggest cause of oil oversupply in recent years. A similar situation has occurred in many countries, as well as in the context of production cuts by OPEC and its partners. So while the oil industry still faces challenges in the face of weak demand, it now seems that the worst is over. 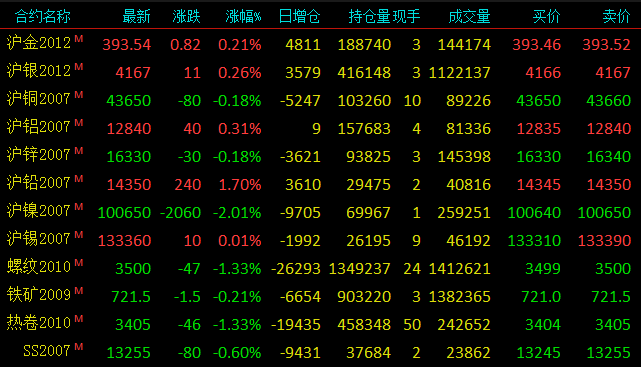 Domestic commodities fluctuated, but the commodity index received more than 1.6 billion of the money. Shanghai crude oil turned red in the afternoon, leading the rise in asphalt, with an increase of more than 30,000 hands a day, and the overall gold absorption of the crude oil plate exceeded 800 million. The black chain index is favored by more than 600 million funds, of which coke alone has nearly 700 million funds. The demon "nickel" has died down, and the non-ferrous plate has lost more than 400 million dollars.

A brief comment on SMM analysts on May 25th

Copper: the main force of Shanghai copper opened at 43570 yuan / ton in the morning. After the opening, short sellers entered the market to put pressure on copper prices. Shanghai copper short-term slipped to a daily low of 43400 yuan / ton, and then bulls increased their positions slightly one after another, and copper prices rebounded slightly to 43560 yuan / ton. It fluctuated around 43500 yuan / ton in the morning and closed at 43600 yuan / ton in midday. Copper prices continued to fluctuate in the afternoon, with the center of gravity rising slightly to 43560 yuan / ton. Near the end of the day short exit, multi-hair strength, copper prices rose to the highest point of the day 43680 yuan / ton, closed at 43650 yuan / ton, down 80 yuan / ton, down 0.18%. Today, the main contract of Shanghai Copper reduced 5247 positions in the day to 103000, mainly for short positions; the trading volume decreased by 78000 to 89000; and the Shanghai Copper Index reduced 6440 positions to 325000, mainly due to short positions. Today, because LME is closed on bank holidays, the inner disk operates independently, and the overall trend is stable during the day, running in the range of 43420 million yuan / ton. Sino-US relations have become increasingly strained in recent days, causing investors to reassess the speed of economic recovery from the impact of the new crown epidemic, market risk aversion has rebounded again, and copper prices lack momentum to rise. The fundamentals have not changed much. Today, Shanghai copper sun, the upper pressure 5-day moving average, KDJ curve cross downward. It is still far away from the multiple moving averages below, and it is unlikely to fall below the 43000 mark. Pay attention to the trend of the night market to see whether the bulls can continue to push up copper prices.

Aluminum: the main 2007 contract of Shanghai Aluminum opened at 12810 yuan / ton in the morning, a spindle line was recorded on the K line in the first five minutes of trading, and the lower shadow line reached the lowest point of 12790 yuan / ton in the day. The first trading stage fluctuated upwards, and the high level recorded 12890 yuan / ton. The continued upward movement was blocked, and the empty entry was more flat. The high level in the second trading stage fell back, all the way down to 12805 yuan / ton, and maintained a narrow range in the afternoon, closing at 12840 yuan / ton, up 40 yuan / ton. The trading volume increased by 0.31%, the trading volume decreased by 41947 to 81336, and the position increased by 9 to 158000, closing at the Xiaoyang line, with the center of gravity slightly higher than yesterday. Aluminum prices are expected to continue to maintain a range of shocks in the evening. Today, it is announced that the inventory of electrolytic aluminum, which is the mainstream consumer of the society, is still strong, and the short-term downward space for aluminum prices is temporarily limited under the background of strong depots. Continue to pay attention to the changes in long positions and market trading sentiment in the evening.

Lead: within a day, the main 2007 contract of Shanghai lead opened at 14180 yuan / ton, running above the daily moving average, and rose strongly. During this period, it once reached 14430 yuan / ton, was effectively supported by the 10-day moving average, and increased its position. It finally closed at 14350 yuan / ton, up 240 yuan / ton, or 1.70%. The position increased by 3610 hands to 29475 hands. Shanghai lead closed barefoot Dayang line, each moving average basically maintained the upward trend, due to the spring bank holiday, Lun lead did not open today, in the absence of outer disk drag, long funds continue to push up lead prices, there is the possibility of continuing to rise at night, but from a fundamental point of view, there is no new Ledo conditions to support lead prices to continue to rise, and be cautious to chase more at night.

Tin: after the opening of Shanghai tin 2007 contract last Friday night trading of 132700 yuan / ton, affected by the departure of bulls and some bulls increasing positions, it showed an overall upward trend and fell slightly after climbing to an intraday high of 134600 yuan / ton. After the opening of 134350 yuan / ton in morning trading today, it generally remained fluctuated around 134300 yuan / ton from morning trading to midday, then the bulls gradually reduced their positions, and Shanghai tin fell under pressure, and finally closed at 133360 yuan / ton, up 1650 tons, or 1.25%. The trading volume was 46192 lots, and the position was 26195 lots, a decrease of 1992 lots. Today, Shanghai tin closed with Xiaoyang line, the physical part is located near the 5-day moving average, the resistance above Shanghai tin is expected to be near the previous high of 136000 yuan / ton, and the lower support is around 129,000 million yuan / ton.