5.25 minutes of the Bronze Morning meeting 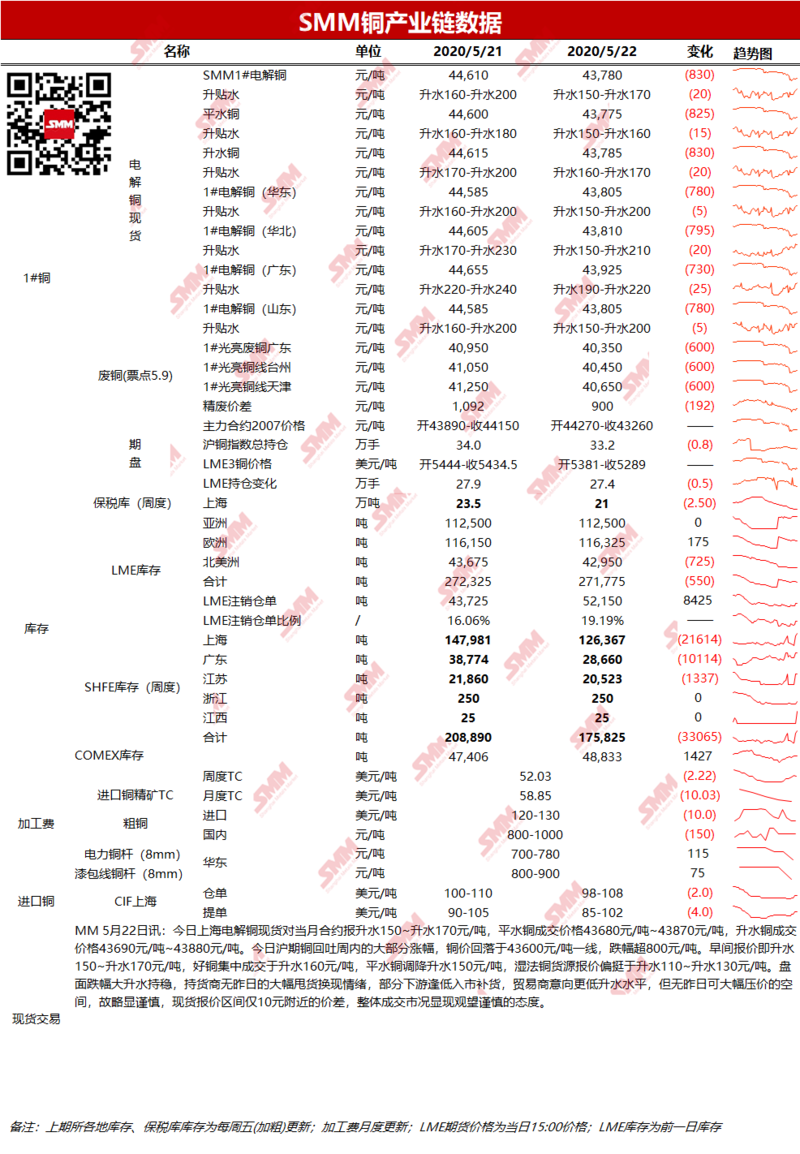 Macro aspect: 1) Chilean Health Minister Manalic revealed that because the number of newly diagnosed patients has been maintained at more than 3000 per day for nearly a week, the relevant treatment resources of Chile's national health care system are close to the limit. In particular, Santiago's treatment capacity has been saturated. According to the latest report of the Peruvian Ministry of Health, in the past 24 hours, there have been 4205 new confirmed cases of crown pneumonia in the country, bringing the total number of confirmed cases to 119959, 83 new deaths and a total of 3456 deaths. At present, there are only 10% to 15% of intensive care beds left nationwide. Fundamentals: 1) Copper concentrate as of last Friday, the SMM copper concentrate index (weekly) was at $52.03 / ton, down $2.22 / ton from the previous month. Peruvian copper concentrate ports have begun to ship one after another, and recent South American ore transactions have also increased in the spot market, but considering that it will take some time to restore copper supply and give priority to the replacement of previous shipments, the supply of goods is still in short supply in recent months. Due to repeated epidemics in South America, SMM understands that the offer in the third and fourth quarters is near the 50 median, but there is no deal under the differences between buyers and sellers on their expectations for the distant month. 2) after the price of scrap copper fell before the rise in the mood of the consignors, copper prices continued to rise last week. In addition, scrap copper imported from Malaysia in South China has been cleared to the factory. The overall supply at the import end has improved compared with April, and there has been a significant increase in the supply of scrap copper in the scrap copper market. Last Friday, the price difference of fine waste was 900 yuan / ton (the ticket point is calculated as 5.9%). 3) the import loss of imported copper was around 250 yuan / ton on May 22. On that day, market turnover remained light and activity was limited by market demand. There were more offers than purchases, and some traders lowered their quotations again in order to close the deal, but no one was interested. Most traders remain in a wait-and-see state, waiting for the price to change; buyers' inquiries are cold, and they are not willing to accept goods in the downward market at a premium. Transaction prices fell in light trading. 4) inventory last week, LME copper inventory decreased by 6975 tons to 271775 tons compared with the previous week; copper stocks in the previous period decreased by 33065 tons to 175825 tons; and copper inventories in the bonded area decreased by 25000 tons to 210000 tons. 5) spot East China: on May 22, the spot price of electrolytic copper in Shanghai rose 160 to 200 yuan / ton against the contract for that month, and the copper in Shanghai gave up most of the gains in the week on the same day. In the high rise of underwater consumption is difficult to boost, traders are forced to take the initiative to offer prices, downstream bargain-hunting mainly, transaction prices as low as 150 yuan / ton, the discount showed a high report low go, the overall buying is still more cautious. South China: on May 22, the spot price of electrolytic copper in Guangdong Province was quoted as 190% 220% higher than that month's contract. In the spot market, although the copper price fell sharply yesterday, the holder did not push forward the price to ship the goods, but the receiving of the goods was not active, and the holder could only continue to reduce the rising water for shipment. On Friday, the rising water continued to decline, but the transaction did not follow the improvement. It is noteworthy that copper imports will continue to arrive this week and domestic smelters will increase shipments, and material supply will increase compared with this week. Copper price and forecast: on May 22, Lunlun Copper closed at 5305 US dollars / ton, down 1.58%, trading volume was 14000 lots, position increased 995 lots to 275000 lots; Shanghai Copper 2007 contract closed at 43490 yuan / ton, up 0.53%, turnover was 47000 lots, position decreased 4067 lots to 104000 lots. On May 22, copper prices continued to show a pullback trend, falling rapidly in the afternoon and showing a large decline during the day. Copper prices gradually stabilized the decline after entering the night market and rebounded slightly in late trading. The main reason for the decline in copper prices on the day. The government work report did not announce a clear target for GDP growth, causing market worries about the domestic economic situation, and A shares also fell sharply on the same day. However, considering that the implied real growth rate of GDP is in line with previous expectations, it is believed that the impact on prices will not be sustained. 2. Tensions between China and the United States continue to ferment, global concerns about international trade are rising, market risk appetite has plummeted, and spot gold and the dollar have rebounded significantly in the short term. Spot, today is the last day of long order delivery, and in the case of a larger pullback in the market, it is expected that there is room for rising water. Lun Copper is closed today, and it is expected that Shanghai Copper will be 43300 won 43,800 yuan / ton today.