CST
translation
Source:SMM
The last trading day of the week, due to the failure of macro expectations and "demon nickel" abnormal disturbance of the non-ferrous market fell collectively, Shanghai copper fell back from multi-day highs. Although the processing fees for copper poles rose on Wednesday, the increases varied from place to place.

SMM5 March 22: the last trading day of the week, due to the failure of macro expectations, the non-ferrous market fell collectively, and Shanghai copper fell back from its multi-day high. Although the processing fees for copper poles rose on Wednesday, the increases varied from place to place. According to our SMM research, this Friday (May 22) Guangdong 8mm power industry pole processing fee of 630mur750 yuan / ton, the average price slightly increased by 5 yuan / ton compared to last Friday "[SMM analysis] by the reduction of orders and waste copper rod inflow double blow, multi-site electrolytic copper rod increase limited zinc, as of May 22, SMM seven zinc ingot inventory of 225700 tons, down 1600 tons compared to last Friday. Zinc prices are strong and volatile this week, and the overall purchasing efforts of downstream enterprises are relatively limited. Orders for die-casting zinc alloys and zinc oxide enterprises still need to wait for overseas demand to pick up. Short-term zinc and upward weakness, the contract price of Shanghai Zinc 2007 is expected to run in the range of 16300 cents per ton. In terms of recycled lead, according to SMM research, this week (May 16-May 22) the weekly operating rate of SMM recycled lead smelting enterprises in the four provinces was 49.6%, up 0.2% from last week. "[SMM research] low-price waste battery supply tight license recycled lead weekly operating rate 49.6%

All black gains fell, with steel down more than 1 per cent and iron ore up only 0.77 per cent. SMM believes that the strong expectations of the short-term two sessions have not been fulfilled as scheduled, and there is a fall in market sentiment after a surge, and spot prices may fall slightly, but the space is relatively limited. Although steel has been dragged down by macro sentiment, there is also support at the raw material end as supply and demand continue to improve. Moreover, the government work report said that it will strengthen the construction of new urbanization and start new construction to renovate 39000 old urban neighborhoods, and support various community services such as the installation of elevators. After digesting this part of the emotion in the later stage, there is a high probability that it will return to rebound.

Crude oil fell 3.31% in the previous period. Risk appetite turned sharply, oil markets led commodities lower and global stock markets came under pressure. Rising concerns about the international trade situation have dampened expectations for the global economic outlook and crude oil demand, which has also been linked to a pullback due to excessive increases in oil prices. The good news is that concerns about the depletion of storage space for onshore and offshore tanks have receded as OPEC and other oil-producing countries slashed crude production and refinery consumption began to increase as the blockade relaxed. 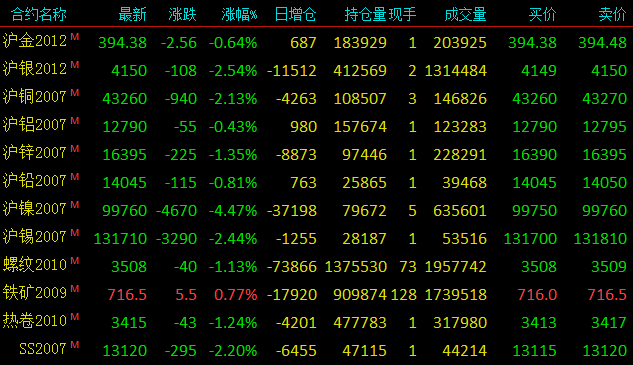 The macro situation is a drag on commodities. Today, more than 6.5 billion have flowed out of the futures market, nearly 2 billion have flowed out of the non-ferrous sector, Shanghai nickel has experienced night market shock, more than 1 billion of funds have escaped from the market, chemical industry and black chain have all left more than 1 billion of the market. Agricultural products plate is relatively stable, only a small amount of capital outflow.

A brief comment on SMM analysts on May 21st

Copper: today, the main force of Shanghai copper opened at 43880 yuan / ton in the morning. After opening, the copper price fell flat, and the copper price fell to 43690 yuan / ton in the short term. Then the bullish positions led the copper price to rebound slightly, but the promotion energy was insufficient, and the short-selling pressurized disk fell to 44330 yuan / ton. Copper prices rebounded slightly after exploring low prices, the center of gravity stabilized at 43440 yuan / ton, and closed at 43520 yuan / ton at noon. Opening in the afternoon, copper prices fluctuated slightly around 43450 yuan / ton, and the copper price fell slightly, closing at 43260 yuan / ton, down 940 yuan / ton, or 2.13%. Today, the main contract of Shanghai Copper reduced its positions in the day by 4263 to 109000, mainly by long positions; the trading volume increased by 40000 to 147000; and the Shanghai Copper Index reduced its positions by 8405 to 332000, mainly by long positions. The government work report for 2020 released today did not set a specific GDP growth target, confirming the market's expectation of serious economic damage. In addition, tensions between China and the United States have further escalated as global investors worry that another deterioration in trade relations between the two countries will damage the economy, and the recent upsurge of risk sentiment has put pressure on copper prices. The fall in oil prices today also dragged down copper prices. The fundamentals have not changed much. Today, Shanghai copper closed negative, giving up the previous three days of gains, MACD red column significantly shrank, close to the 5-day and 10-day moving average, waiting for the outer disk guidelines in the evening to test whether Shanghai Copper can hold the 43000 mark.

Aluminum: the morning jump of Shanghai Aluminum's main 2007 contract opened as low as 12840 yuan / ton. In the first trading stage, the shock fell back to the intraday low of 12730 yuan / ton, and in the second trading stage, the low rebounded all the way up, reaching 12835 yuan / ton. Due to the strong resistance of the 60-day moving average above, the aluminum price was difficult to continue to break through, and then softened to maintain a narrow range. The daily trading closed at 12790 yuan / ton, down 55 yuan / ton, down 0.43%. Trading volume decreased 38777 lots to 123000 lots, position increased 980 lots to 158000 lots, closed at Xiaoyang line, the center of gravity is below the 5-day moving average, and it is lower than yesterday, the daily MACD red line is shortened. Today, the two sessions announced good news related to tax cuts and fee cuts, but the non-ferrous disk has not yet received bullish signals, and the overall trend is not strong today. Superimposed aluminum prices are faced with expectations of weakening the marginal consumption of fundamentals, and do not continue to rise today. It is expected to continue to test the resistance at the Wansan pass above at night, and pay attention to the changes in market trading sentiment and the release of related macro news in the evening.

Nickel: in terms of Shanghai Nickel, a number of contracts in Shanghai Nickel plunged sharply before the close of trading last night, resulting in a suspected "own finger" incident. After the market opened this morning, it was revised according to the price difference between internal and external trading. Shanghai Nickel 2007 main contract opened at 102890 yuan / tonne. After a large number of positions were closed immediately at the beginning of the session, Shanghai Nickel fell to 102800 yuan / ton first-line shock. After 9:30, the short-term attempted to enter the market to exert pressure, and the bulls continued to close their positions and leave. Shanghai Nickel fell above the 100000 mark, subject to the 20-day moving average pressure, running at 100,200m2 and 101000 yuan / ton until the afternoon. After about 14: 00, Shanghai Nickel fell below 100, 000, and the long-empty line around 99700 yuan / ton fled the market one after another, with the lowest falling to 99520 yuan / ton during this period, the lowest point in the day. Shanghai nickel finally closed at 99760 yuan / ton, down 4670 yuan / ton from yesterday, a drop of 4.47%. Bulls left the market in large numbers, with their positions reduced by 37198 to 79672 compared with yesterday, while trading volume increased by 200000 to 636000. At present, in the macro aspect, the market has high expectations for the policy, but there is no clear positive at the moment, superimposing the panic caused by yesterday's suspected "own finger" incident, making Shanghai Nickel give up all the gains in the week. However, over the past month, most of Shanghai Nickel has been operating within the 98000 RMB102500 / ton platform channel, and in the case of relying on the lower 40 / 60 daily moving average support, the future of Shanghai Nickel will still be dominated by consolidation and lower support. Next week, Shanghai Nickel is expected to continue to fluctuate between 98800 and 102500 yuan / ton next week.