5.22 minutes of the Bronze Morning meeting 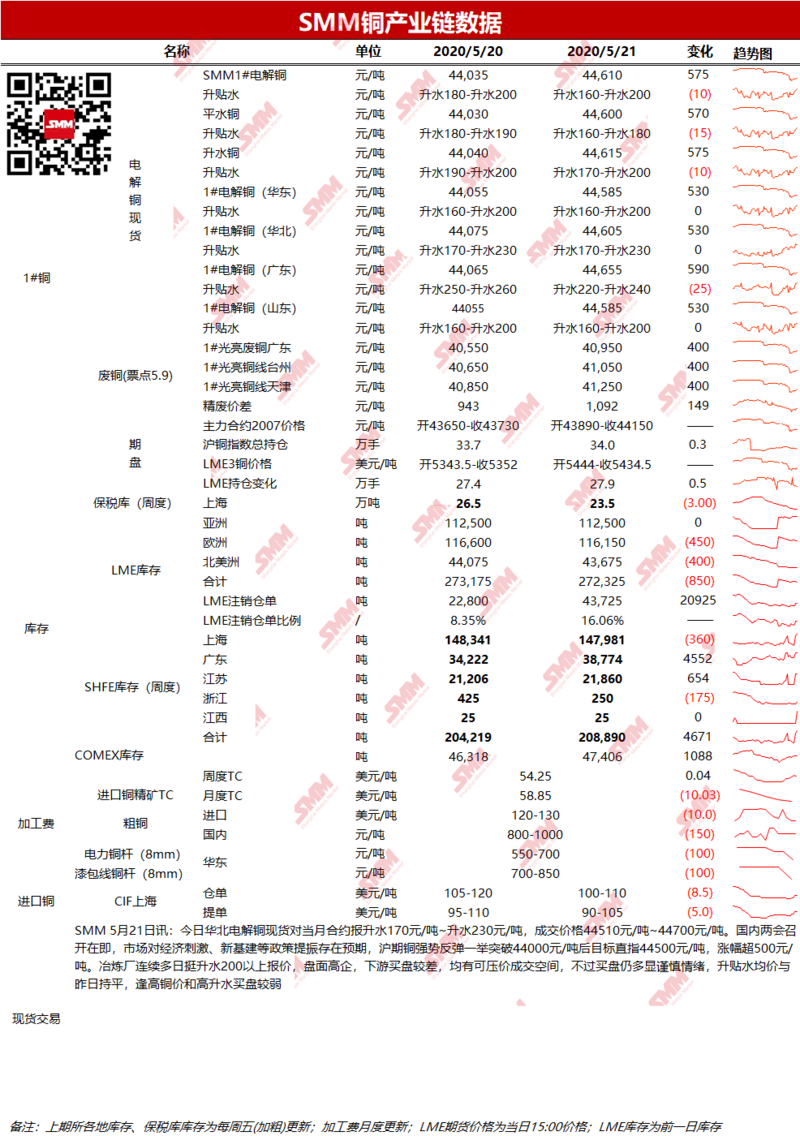 Macro aspect: 1) the number of people applying for unemployment benefits for the first time in the United States last week was 2.44 million, indicating that the large-scale job loss continues. 2) the session of China's National people's Congress opened this morning. The government work report said that because of the great uncertainty of the global epidemic and economic and trade situation, China's development is faced with some unpredictable factors, so it did not put forward a specific target for economic growth for the whole year. [neutral] fundamentals: 1) scrap copper was quoted at 40800 yuan / ton ~ 41100 yuan / ton in Guangdong yesterday, up 400 yuan / ton from the previous month. Yesterday, the price difference of fine waste was 1092 yuan / ton, an increase of 149yuan from the previous month. (ticket point is calculated as 5.9%) Copper prices soared again yesterday, scrap copper merchants are high and cautious, a large number of goods may be hesitant to receive goods, mainly fast in and out, copper prices in the high scrap copper market to maintain a good degree of activity, manufacturers have a good increase in raw material inventory recently. 2) imported copper was quoted at US $100 per ton on warehouse receipt yesterday and US $105 per ton on bill of lading, QP June. The import loss is around 350 yuan / ton. Import losses continued to expand yesterday, most traders did not quote, still on the wait-and-see state, waiting for the future price comparison will be opened again because of the good news of the "two sessions." Some traders have ample supply of long-term goods arriving in Hong Kong, which may weaken further compared to the price, so they lower their quotations in order to close the deal. Buyers are cautious, the willingness to receive goods is not strong, buyers and sellers psychologically expected prices are difficult to match, the overall performance of the transaction is light, a small number of low-price shipments still lead to a rapid decline in premium. 3) inventory May 21 LME copper inventory reduced 850t to 272325 tons; the last phase of copper warehouse receipt inventory reduced 2306 tons to 64426 tons 4) spot East China: yesterday, Shanghai electrolytic copper spot contract quoted water 160 ~ 200 yuan / ton, copper imports significantly increased, consignors are willing to meet high exchange, have opened a downward quotation model, it is expected that there is still room for downgrade today. Spot water 150 won 180 yuan / ton South China: yesterday, Guangdong province electrolytic copper spot to that month's contract quoted a rise of 220,240 yuan / ton. In the spot market, consignors still insist on high-rise water shipments in early trading, but the overnight copper price has risen sharply, coupled with an increase in inventories, and the receiver generally takes a wait-and-see attitude to accept the goods. With the outflow of imports and warehouse receipts, the holder began to take the initiative to reduce the price for shipment, but the consignee still did not buy it, and the rising water was forced to fall further. Overall, shipments increased significantly yesterday, while Shengshui continued to decline. Copper price and forecast: last night, Lun Copper closed at 5390 US dollars / ton, up 1.02%, trading volume 16000 lots, position increased 2304 lots to 274000 lots; Shanghai Copper 2007 contract closed at 43890 yuan / ton, down 0.59%, trading volume 54000 lots, position decreased 702 lots to 112000 lots. Copper prices showed a short-term correction after the previous day's sharp rise, giving up most of the gains. At present, the cumulative diagnosis of the new crown epidemic has exceeded 5 million. From the point of view of the growth rate, the spread rate has not been strongly curbed, and the cautious attitude of investors has stopped the dollar index from falling. On the other hand, it was announced yesterday that the total annualized sales of existing homes in the United States in April reached the lowest level since September 2011, with a general correction in a wide range of assets amid rising risk aversion. As the vaccine stimulus of the previous surge has been questioned in the United States, the growth of the epidemic is also unabated, and copper prices are expected to give up some of their gains today. Spot aspect, the import copper supply increases obviously, the holder meets the high exchange willingness to strengthen, have opened the quotation reduction mode one after another, it is expected that there is still room for downward adjustment today. It is estimated that today Lun Copper 5350US5400 US dollars / ton, Shanghai Copper 43600RMB4400 / ton.