Intra-day zinc led the decline, the main contract fell 1.84%, showing fatigue. From a fundamental point of view, the supply-side story represented by the mine is ebbing, and there are no more new stories about zinc fundamentals. SMM makes an inventory of zinc fundamentals and combs the recent fundamental stories.

First of all, let's look at the mine-side supply.

As far as the country is concerned, zinc mine production is steadily recovering. with the warmer weather and rising prices, mines in high and cold areas will gradually resume production and contribute to the increment, domestic seasonal recovery is still planned, zinc concentrate output will continue to increase compared with the previous month, and the current zinc price at the same time processing fee has been reduced to around 5000 yuan per metal ton. There have been few actions to cherish the sale and control of goods in mines, and the domestic mine-end supply is generally in a state of growth. However, compared with last year, the cumulative decline is obvious. Looking overseas, SMM follow-up shows that the major mines mainly affected by the epidemic are Antamina in Peru and San Cristobal in Cerro Lindo, Bolivia. The current epidemic in South America has not yet seen a clear inflection point, but economic restart and mine resumption operations have begun, Peru's large local mine (daily output of 5000 tons) has been restored, including Cerro Lindo under Nexa, which has gradually recovered since May 11; however, Antamina, the largest zinc mine in Peru, has been postponed due to workers' infection, and the actual recovery of zinc mines in Peru in May is still relatively limited, which is expected to be postponed until early June. The prevention and control measures in Bolivia have been downgraded. The main local mine is the San Cristobal mine of sumitomo, with a zinc production of 202000 tons in 2019. At present, the official website has not seen any relevant information, and SMM will continue to follow up; while some mines in North America and Mexico are also beginning to recover. Generally speaking, the overseas mine end is in a gradual recovery period, and the overall supply situation is improving, but from the perspective of domestic supply, SMM maintains its original judgment that due to the limited amount of recovery and the need to give priority to the supply of contracts in arrears after recovery, the actual amount of overflow is expected to be limited. In the second half of 2020, the mine side is only expected to complete the switch from shortage to balance, while overseas to supply the country, consider the shipping time of about one month. It is expected to be at the end of June and beyond, but from a timeline point of view, the story is nearing its end.

And look at the ingot end supply. The pace of domestic processing fee reduction is relatively fast, from about 6500 yuan / metal ton to about 5000 yuan / metal ton. It only takes about 2 months for the smelter to actively or passively give off profits, and the profit distribution is basically balanced at present. However, the supply gap still exists, which cannot be made up by the adjustment of processing fees. after changing to May, as a continuation of the mine supply story, smelter production reduction and overhaul began to disturb market sentiment. According to SMM research, production in May is expected to drop by about 4500 tons compared with April, and there is still a reduction in June, but it is still a positive growth compared with last year. As of May 18, SMM statistics showed that the inventory change in May 7 was + 800t, which did not continue the pace of going to the warehouse (the monthly inventory change in April was-77000 tons). This is due to the apparent nature of the inventory transfer in April, but also because the import window opened to guide the bonded area and newly arrived imports of zinc into the domestic replenishment, overdraft part of the downstream consumption. However, at present, the domestic social inventory is still 227700 tons, which is a very safe level. historically, the consumption off-season from May to June is extremely limited, and it is expected that there will be no more accidents this year. 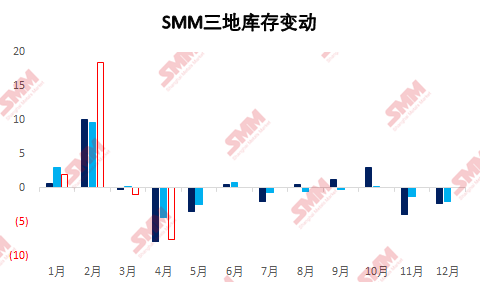 Back to the fundamentals, zinc benefit is not much, but the time mismatch of internal and external ore supply is not over and still constitutes a backing force. At the same time, from a macro point of view, the resumption of the global economy will have a driving force on the external demand for zinc, while the expectations of infrastructure brought about by domestic policy guidelines will continue to rise, but the economic restart that has not reached the inflection point of the epidemic may lead to a second outbreak of the epidemic. The actual expectations that may occur after the landing of domestic infrastructure may be poor, as well as the gradual promotion of the off-season of consumption, and the hidden dangers under the cheers can not be ignored.