SMM5 March 21: the two sessions will finally be held this afternoon, the market is warm. The non-ferrous market is still up a lot. The recent rise in nickel prices, SMM believes that the direct reason is due to the decline in crude oil inventories to boost speculative sentiment, bulls greatly increase positions. In terms of fundamentals, the consumption of pure nickel is weaker than that of nickel pig iron in the early stage. With the resumption of production in Europe and the United States, the downstream recovery of nickel other than stainless steel, there is a lot of room for marginal improvement. At present, the expectation of the recovery of overseas downstream terminal consumption has not yet entered an obvious implementation stage, and the domestic downstream recovery has not peaked for a long time, and it is a major theme for the global economy to gradually emerge from the impact of the epidemic in the future. however, it will take a long time to fully recover to the level before the epidemic, and nickel prices are expected to continue a strong shock pattern in the second half of the year. Aluminum, May 21, the main consumer to maintain the trend of depot, SMM statistics of domestic electrolytic aluminum social inventory decreased by 79000 tons to 979000 tons. According to the monthly report released by the World Metal Statistics Bureau (WBMS) on Wednesday, the global zinc market has a supply surplus of 68000 tons from January to March 2020 and a supply shortage of 75000 tons for the whole of 2019.

Black rose slightly across the board and generally fell slightly in the morning. The strong performance of weekly apparent steel consumption reflects the current strong demand for work, in addition to the superimposed mine end cost rise and macro infrastructure policy warm expectations, short-term steel is still in a strong momentum. Mine end news, Shahe City carried out safety inspection of explosion-related enterprises the local mine has stopped production, according to SMM understanding, in 2019 Xingtai City iron ore output of 1.7 million tons, down 13.6% year on year, involving iron powder production of less than 1 million tons. Xingtai is strictly overhauled by safety and environmental protection, and the local mine just resumed production at the beginning of May. At present, the local mine has said that it has stopped production. "[SMM News] # Xingtai # Shahe City has carried out a large-scale safety inspection of explosion-related enterprises and the local mine has stopped production.

Crude oil rose 3.17% in the previous period. FatihBirol, director of the (IEA) of the International Energy Agency, said in an interview with the media that global oil demand will take at least a year or more to return to the 100m b / d level before the outbreak of the new crown pneumonia crisis. The pace of recovery in global oil demand will depend largely on global economic growth and the possibility of a second wave of new crown outbreaks, which could lead governments to impose stricter blockades. In its oil market report released in April, the group said the outbreak had erased the increase in global oil demand over the past decade as many countries adopted unprecedented blockades to contain the spread of the new crown virus. 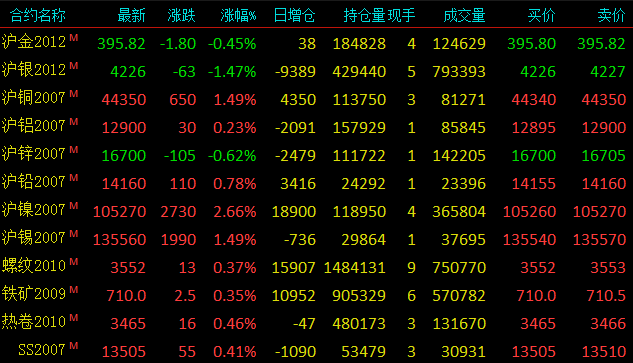 Zinc: the mainstream transaction of zinc in Guangdong Province was 16730mur16820 yuan / ton, and the quotation was concentrated on the 2007 contract for Shanghai zinc. The price increased by 10 yuan / ton compared with the previous trading day, and the discount on the Guangdong stock market was 130 yuan / ton higher than that of the previous trading day, and the discount on the Guangdong market was 10 yuan higher than that of the previous day. The first trading session, the initial market is still trying to push the price delivery, individual traders quoted higher prices, rising water prices, but poor market feedback, coupled with the warehouse receipt outflow of additional negotiable goods, the late market quotation loosened, Kirin, Huize, Mengzi quoted for the Shanghai zinc contract in July up 70 RMB80 / ton, Tiefeng Shengshui 60RMB70 / ton. The second trading session, downstream purchases more yesterday, today slightly wait-and-see, traders in the face of rising water is also limited, market transactions are weak, individual holders slightly adjust the price of shipments, but the overall market quotation has not changed much. Kirin and Mongolia quoted a price for the July contract of zinc in Shanghai for 65 RMB80 / ton, and Tiefeng Shengshui 60 RMB70 / ton. The mainstream transactions of Kirin, Mengzi, Huize, Tiefeng and Feilong were 16730mi 16820 yuan / ton.