CST
translation
Source:SMM
Latest tracking of the global epidemic: new cases in 9 US states are on the rise * WHO says more than 120 new crown vaccines are being developed * Spain extends the state of emergency again * Trump says he will end taking hydroxychloroquine within a day or two * US 50 states restart the economy to varying degrees * the US House of Representatives will vote to expand the loan program * the UK says it may mass produce the vaccine for the new crown virus in September * Turkey Airlines will resume domestic flights on June 4

SMM5, March 21: at present, the cumulative number of confirmed cases of new crown pneumonia in the world has exceeded 5.08 million, of which the confirmed case of new crown pneumonia in the United States has exceeded 1.54 million. According to New York Times statistics, in the past 14 days, new cases have increased in nine states, including Texas, while others have remained flat or declined. As of the 20th, 50 states in the United States have partially lifted the ban.

[who says more than 120 new crown vaccines are being developed] on the 20th, local time, WHO held a regular press conference on new crown pneumonia. Maria van Kohof, technical director of the WHO Health Emergency Project, said that more than 120 candidate vaccines for new crown virus are being developed, and the actual number is certainly more, some of which are undergoing clinical evaluation. She stressed that there are no shortcuts to vaccine development and must be carried out in accordance with safe and effective standards, and no step can be skipped.

The latest situation of the global epidemic: 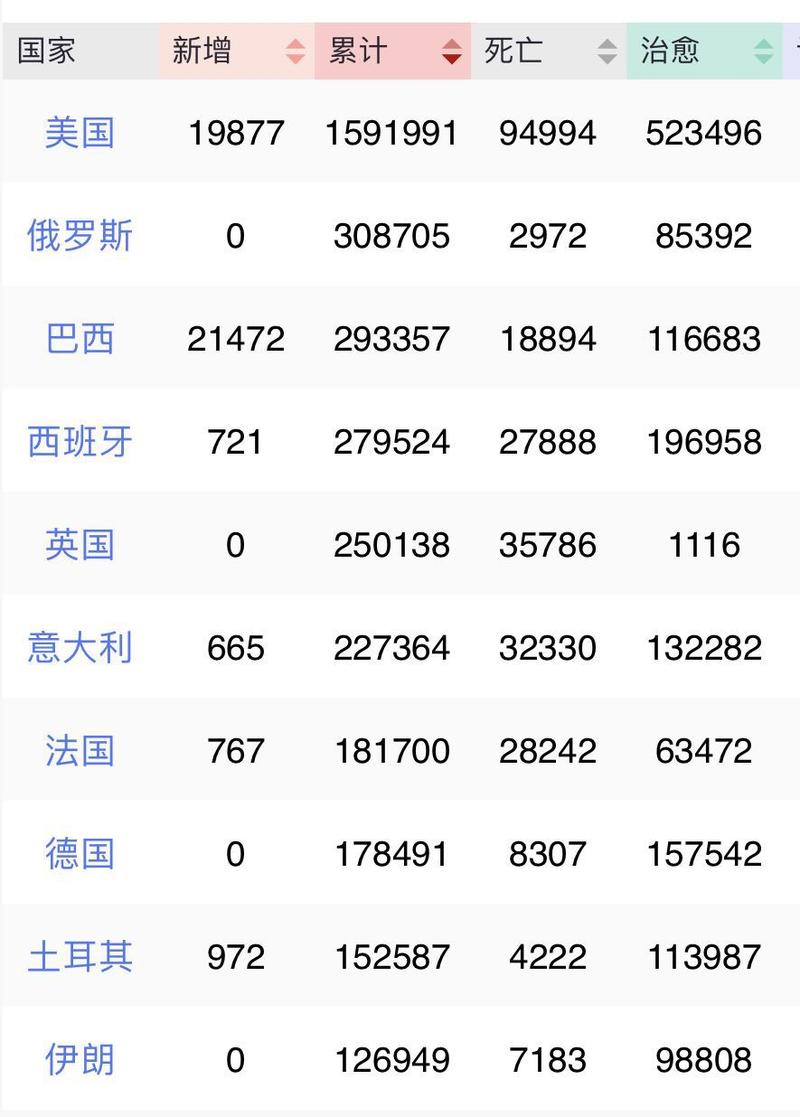 National Health Commission: from 0 to 24:00 on May 20, 31 provinces (autonomous regions, municipalities directly under the Central Government) and Xinjiang production and Construction Corps reported 2 new confirmed cases, including 1 imported case (in Guangdong) and 1 local case (in Shanghai); no new death; 1 new suspected case, which is imported from abroad (in Shanghai).

U.S. Senate Majority (Republican) Leader Mitch McConnell: expanding unemployment benefits will not be part of the next economic bailout bill.

[all 50 states in the United States restart their economies to varying degrees] on 20 May local time, more than two months after being affected by the new crown epidemic, all 50 states in the United States restarted their economies, with different degrees and ways of opening up. The Northeast and West Coast of the United States and the Midwestern states led by the Democratic Party are slow to restart, some states choose to open county by county, and some states continue to implement the "home order." By contrast, some southern states opened earlier and more comprehensively. On the 19th, the Centers for Disease Control and Prevention issued a 60-page guidance document suggesting that states should restart the first phase after a 14-day decline in cases. As of Tuesday, new daily cases in at least 17 states were on the rise, while only 16 states had an average daily increase of more than 10%, according to an analysis of data from Johns Hopkins University.

[Korean nightclub epidemic] the number of confirmed cases of new crown pneumonia related to nightclubs in South Korea rose to 201.

The Japan Broadcasting Association NHK: has accumulated 16433 cases of new crown pneumonia and 784 deaths in Japan.

Lufthansa: talks are under way with the Economic Stability Fund, which will provide up to 9 billion euros.

Governor of the Central Bank of Brazil: it is difficult to give GDP expectations in the face of many uncertainties. The unemployment rate is expected to exceed 15%. If the market is unstable, Brazil's central bank may raise benchmark interest rates.

Brazil will issue a decree by next week to take measures to help small and medium-sized enterprises increase credit.

The Italian authorities will reopen all airports in the country from June 3.

Europe imposes duties on Chinese Hot-rolled Coil, Heavy Plates
In order to control competition for EU producers including ArcelorMittal and ThyssenKrupp AG, the European Union has imposed a tariff of 73.7 percent on two type of steel from China.

CST
data analysis
Europe imposes duties on Chinese Hot-rolled Coil, Heavy Plates
In order to control competition for EU producers including ArcelorMittal and ThyssenKrupp AG, the European Union has imposed a tariff of 73.7 percent on two type of steel from China.