SMM5 March 20 News: in the morning, most of the non-ferrous plate continued to rise. On a macro level, the Minister of Industry and Information Technology said that foreign trade enterprises are facing greater difficulties and are still paying close attention to them. They are also prepared to introduce more targeted policies to help small and medium-sized enterprises in different special industries to support the vast number of small and medium-sized enterprises to tide over the current difficulties. Shanghai and tin rose strongly and their prices rose 3% in intraday trading. Nickel also rose strongly under Indonesia's foreign trade controls. Domestic port nickel ore inventory is still net consumption, nickel iron prices remain strong, the previous electrolytic nickel to nickel pig iron discount will enable steel mills to increase the purchase of electrolytic nickel, nickel prices are still supported below. With the late Philippine nickel mine shipments gradually return to normal, the shortage of raw material inventory may be alleviated. Shanghai Aluminum has been rising for many days, the recent domestic electrolytic aluminum consumption performance is good, and large households are actively receiving goods, aluminum bar processing fees are high, electrolytic aluminum inventory continues to be rapidly removed, which has a great support for aluminum prices. In the near future, the two sessions will be held soon, the macro mood will improve, and aluminum prices are expected to maintain a strong momentum.

Black iron ore rose 1.65%, while steel fell slightly. Last night, the Tangshan municipal government suddenly issued a notice to adjust the management and control measures in May, saying that 32 steel rolling enterprises would be allowed to produce on the premise of meeting the emission standards, sending out a signal of loosening production restrictions. to the surprise of the market, steel futures fell generally. However, during the two sessions, it seems that production cuts and production restrictions are still likely to be implemented, coupled with the hot downstream demand, it is still possible to rise after a short-term price correction. At the iron mine end, it was reported earlier that BHP Billiton's Jimba (Jimblebar) had been temporarily shut down. BHP Billiton has had to suspend operations at an iron ore mine in Western Australia that uses a fleet of fully automatic trucks, according to local media reports. After that, however, BHP announced that it would resume operations, with a limited impact on production, but a slight boost to market sentiment.

Crude oil in the previous period fell by 0.99%. API crude stocks fell by 4.8 million barrels last week, the biggest decline since 2019, while Cushing crude stocks fell by 5 million barrels, the biggest drop on record. The July contract hovered around $31.75 before the data were released, then extended its intraday gains. Standard Chartered commodities said optimism was spreading, supply was falling faster than expected and the market had balanced. There is a strong optimism in the crude oil market, but more needs to be done cautiously. 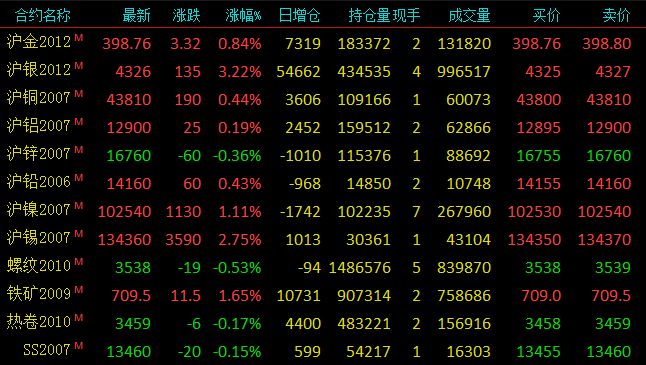 Copper: today, spot electrolytic copper in Guangdong province rose 250 to 260 for the current month's contract, with an average price increase of 45 percent, while wet copper rose 200 to 210, with an average price increase of 40 percent. The average price of electrolytic copper is 44065 yuan / ton, 55 yuan / ton, and the average price of wet-process copper is 44015 yuan / ton, 60 yuan / ton. In the spot market, inventories continued to decline, stimulating shippers to bid up for shipments. Early in the morning, they heard the price of 250 yuan / ton of good copper and copper, because shippers were limited and those who received goods were forced to accept high water supply, but users only maintained on-demand purchases and did not want to receive more goods. In addition, with the outflow of delivery sources, the price of good copper rose to 260 yuan / ton and then fell back to 250 yuan / ton. In the future, we still need to pay attention to the outflow of warehouse receipts, if a large number of warehouse receipts outflow is not conducive to rising water. On the whole, Shengshui continued to rise today, but the transaction was not good due to the limited number of consignees.

The mainstream transaction of zinc in Guangdong Province was 16790mur16920 yuan / ton, and the quotation was concentrated on the price increase of 50 million yuan / ton in the 2007 contract for Shanghai zinc. The discount on the Guangdong market compared with the Shanghai market was 120 yuan / ton, which was 10 yuan lower than that of the previous trading day. In the first trading session, the inventory dropped slightly, and the price quoted by the holder was still firm, and some of it was quoted at 5mur10 yuan on the net price, but on the whole, the net price was mostly flat, and the transaction price between market traders was good, and the downstream just needed to purchase mainly, and the procurement was limited. Kirin and Mongolia quoted a price for the July contract of Shanghai zinc, which rose 60rel yuan / ton, and Tiefeng water rose 50rel 70 yuan / ton. The second trading session, individual holders slightly adjust the price of shipments, taken together, the overall market quotation has not changed much, the transaction is also relatively stable. Kirin and Mongolia quoted a price for the July contract of zinc in Shanghai for 60 won 70 yuan / ton, while Tiefeng water rose 60 won 70 yuan / ton. The mainstream transactions of Kirin, Mengzi, Huize, Tiefeng and Feilong were 16790 Mel 16920 yuan / ton.