SMM5 on May 19th: the solid waste Center announced the details of the seventh batch of applications for import restrictions in 2020 (see table below). A total of 14 copper-related enterprises were approved this time, with a total import volume of 10423 tons. Compared with the previous batches, the approval distribution accords with the rhythm of more approvals and then less approvals each quarter. 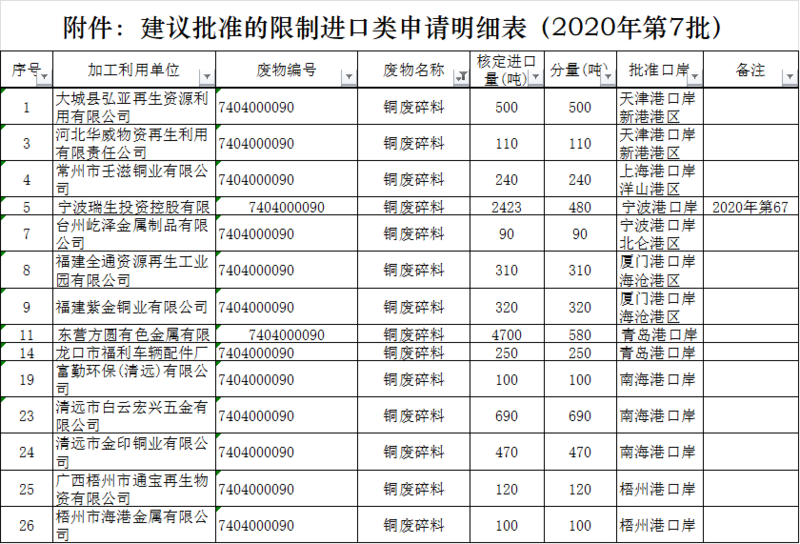 The first seven batches of approval this year totaled 540200 physical tons of scrap copper. According to customs data, the import volume of scrap copper from January to April was 305700 physical tons, and it can be roughly estimated that the remaining 200000 tons of scrap copper has not yet been used, while the import of scrap copper in April is only 80, 000 physical tons, which is a low level. even if the overseas scrap copper supply gradually resumes will improve the scrap copper import, but the remaining batch volume can meet the market demand at least before July, and maintain the expectation that the current approval volume is still sufficient. In addition, there are still great doubts in the market whether the standards of "recycled copper raw materials" and "recycled brass raw materials" can be implemented on July 1 as scheduled. Due to the impact of the epidemic, waste enterprises have not received the relevant implementation arrangements so far. We need to pay close attention to the following policy updates and their impact on the import of waste copper.