CST
translation
Source:SMM
On Tuesday, the futures market continued to rise and the bulls remained unabated. Shanghai nickel surged more than 3 per cent as supply-side reports said Indonesia had no plans to reopen exports of low-grade nickel mines, while the export ban had accelerated since January 1, 2020.

SMM5 March 19: on Tuesday, the futures market continued to rise, and the bulls remained unabated. Shanghai nickel surged more than 3 per cent as supply-side reports said Indonesia had no plans to reopen exports of low-grade nickel mines, while the export ban had accelerated since January 1, 2020. The Minister of Energy and Mineral Resources Regulation No. 11 of 2019 provides for a ban on accelerating the export of low-grade nickel ores. This means that as long as there is no new Permen, ban on nickel exports will still apply. For nickel mines, exports are still banned and the government has no plans to relax. In addition, according to SMM data, China produced 9900 tons of metal nickel sulfate in April, compared with 44500 physical tons, down 6.88% from the previous month and 20.54% from the same period last year. The decrease in nickel sulfate production is mainly related to the shutdown of some plants, which is expected to reduce the production of 6,000 physical tons of nickel sulfate. The price of nickel rose in April, and the raw materials of nickel sulfate rose, but the demand for nickel sulfate was still weak. Some manufacturers chose to stop production to solve the problem of overstocking and low-price shipments. [SMM data] Nickel sulfate downstream April consumption inventory: new energy vehicle market has not yet come out of the trough.

Black rose again across the board, with iron ore rising 3.64%. The recent hot demand for ferrous metals will be held soon, and the market is generally expected to have more favorable policies to be introduced. And iron ore due to the early port inventory is low and the shipping volume of external ore has not increased significantly for the time being, resulting in a recent rise in iron ore significantly faster than building materials such as threads. The MMi 62 per cent port spot index of iron ore rose more than 9 per cent from a minimum of 662 yuan / ton to 722 yuan / ton in nearly half a month. The spot price of thread rose from 3545 yuan / ton to 3690.3 yuan / ton, an increase of about 4%. The surge of raw materials brings greater pressure to the current steel mills. [SMM analysis] Iron ore rises faster than rebar mills have higher pressure and stronger willingness to raise prices.

Crude oil rose 1.67% in the previous period. The (CME) June US oil contract will end electronic trading at 5:00 Beijing time on the 20th, while the oil price, which plummeted to negative when the contract was delivered in May last year, caused a global sensation. However, the fundamentals and market mentality of the oil market have improved significantly this month, and the re-emergence of negative oil prices is a low probability event. And the major domestic banks completed the monthly shift of positions in Metro last week. There are signs that demand for crude oil has rebounded, and it is hard to repeat the all-time low of minus $40 a barrel last month. "[concern] the monthly delivery of the WTI6 contract is imminent. People in the industry are not expected to return negative oil prices. 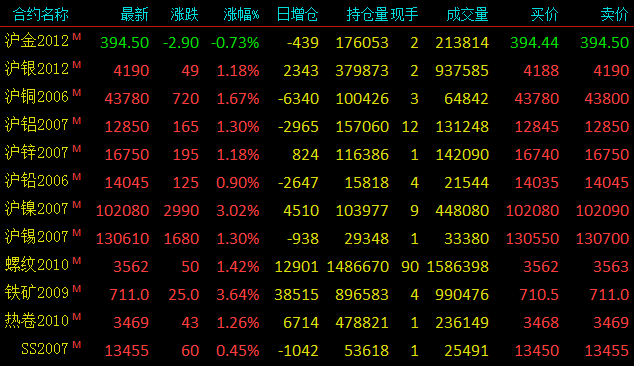 Today, the commodity market inflows exceeded 600 million yuan. The frenzied performance of iron ore has attracted the attention of the entire black sector, with inflows of more than 1.1 billion yuan far exceeding that of the rest of the sector, with more than 900 million of the iron ore entering the market. Precious metals rise temporarily, behind the outflow of a large amount of money, Shanghai gold, Shanghai silver outflow of 8.63 yuan, 590 million yuan, ranking first in commodities.

A brief comment on SMM analysts on May 19th

Copper: today, the main 2007 contract of Shanghai Copper opened at 43880 yuan / ton in the morning. After the opening, the bulls pushed the copper price straight up to the intraday high of 44030 yuan / ton, but then the increase in copper price fell back to the position of 43710 yuan / ton, and the center of gravity stabilized at 43750 yuan / ton. Before the midday close, copper prices fell slightly to close at 43590 yuan / ton. In afternoon trading, copper prices rebounded again to nearly 100 yuan / ton, and then swung around the position of 43620 yuan / ton, and finally closed at 43690 yuan / ton, up 780 yuan / ton, or 1.82%. Today, the position in Shanghai Copper 2007 contracts increased by 3141 lots to 106000 lots, mainly as long positions increased, while trading volume increased by 13039 lots to 92635 lots. Shanghai Copper 06 contract within the day reduced positions by 6340 hands, to 100000 hands, mainly for short positions to reduce positions backward. At present, the disk still maintains the back structure, and the price difference narrowed to around 100 yuan / ton every other month. Copper opened higher in Shanghai during the day, mainly because the experimental new crown vaccine showed positive signs, superimposed signals from various countries to release sustained easing, strengthened investors' expectations for a faster pace of economic restart, and market risk appetite significantly warmed up, pushing up copper prices. In addition, the domestic "two sessions" are just around the corner, and market expectations for more favorable policies are rising, supporting copper prices to remain high. At present, Shanghai Copper Shengyang, standing on all moving averages, KDJ three-line adhesion, technical point of view, copper prices still have room to rise. Waiting for the guidance of the outer disk at night to test whether Shanghai Copper can continue to rise, the short-term target is directed at the 44000 yuan mark.

Zinc: within the day, the main 2007 contract of Shanghai zinc opened at 16935 yuan / ton, and zinc broke through again at the beginning of the session, but when it reached a high of 16960 yuan / ton, it fell down by selling pressure, and it fluctuated down to around 16770 yuan / ton. Some short sellers left the market, Shanghai zinc made a slight repair up, and then a large number of people left the market. Shanghai zinc picked up the downward trend and fell 16710 yuan / ton, and finally closed up 16750 yuan / ton, up 155yuan / ton, up 0.93%, and the trading volume increased by 14631 to 142000 hands. The position increased by 824 hands to 116000 hands. Zinc received a long shadow Xiaoyang column, the upward pressure is obvious, the current zinc contradiction has not been further intensified, zinc may be weak finishing operation in the evening.