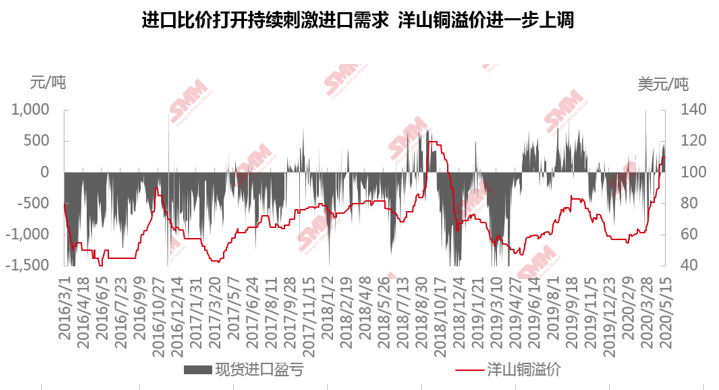 Mainly due to the good performance of domestic consumption, and is still in the state of continuous de-warehousing, Shanghai copper futures disk to maintain the back structure, LME contango maintained at around 30 US dollars / ton, import profit window continues to open, import copper demand is not reduced. Copper inventories in the Shanghai Free Trade Zone fell 30, 000 tons to 235000 tons month-on-month on Friday, falling for eight consecutive weeks and the biggest weekly decline in nearly two months, according to SMM research. The domestic copper consumption performance is good, the domestic continues to go to the warehouse. The import price ratio continued to open, stimulating the demand for imported copper, the Yangshan copper premium continued to rise, the number of imports declared in the market increased, and the inventory in the bonded area further declined.

In terms of quotations, there is a shortage of bills of lading arriving in Hong Kong in recent months, and traders have a strong willingness to raise prices, and many of them choose to import their own goods, so the number of offers is limited. In recent months, the bill of lading continues to be in short supply. In the distant months, most of the offers for bills of lading in Hong Kong are at a high price, mainly because the holder expects that the price comparison in July after the change of month is very likely to open. However, the buyer's demand for the far-month bill of lading is light, mainly because the current price comparison in July has not been opened, and the spot discount in the domestic market fell rapidly last week, and the buyer's mood was suppressed.

There was a sudden surge in LME copper inventories last Thursday, mainly in Asia. According to SMM, the copper inventory increase is mainly due to poor overseas consumption, the backlog of inventory to the LME warehouse, but the recent LME inventory overall in a downward trend. As the epidemic has led to a weakening of overseas demand, and the domestic epidemic has basically been brought under control, all walks of life have resumed work and production in an orderly manner. It is expected that LME copper stocks will continue to be transferred to China in the later stage.