SMM5 March 18: customs data show that copper scrap imports in April were 80597 physical tons, down 1.76% from the previous month, and 56.24% less than the same period last year. From January to April, imports totaled 305680 physical tons, a cumulative decrease of 44.37% compared with the same period last year. As overseas scrap copper exports began to be blocked one after another in late March, domestic scrap copper imports in April were in line with the trend of month-on-month decline; while the cumulative import volume almost halved compared with the same period last year, except for supply-side factors, there are also reasons why importers grabbed imports in July last year, resulting in a large base. 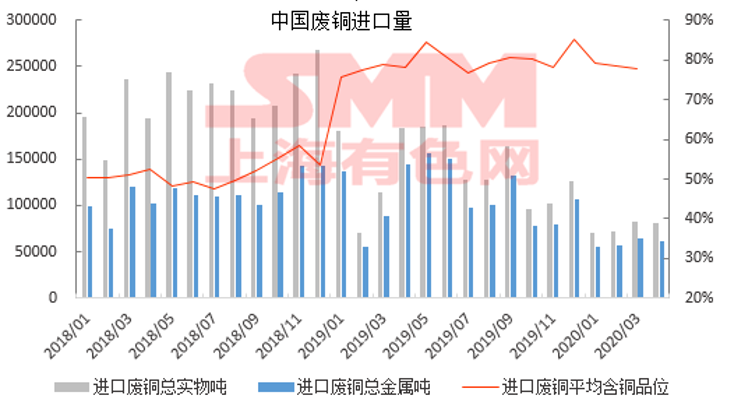 The average grade of imported scrap copper in April was 75.7%, equivalent to 61013 tons of metal; from January to April, the cumulative amount of copper metal was 237688 tons, down 44.15% from the same period last year, or about 187890 tons of metal. The decrease of grade is mainly due to the increase in the proportion of waste brass. According to SMM, Malaysia, one of the main sources of scrap copper imported from China, was ready for container shipment at the end of April, and there are signs of deregulation in all regions of the world. Industry, ports, logistics, etc., are continuing to resume work, and overseas scrap copper exports are gradually improving. According to the import cycle, the arrival of imported scrap copper should increase by the end of May, but the contribution to the overall import volume is limited and is expected to increase only slightly from April.

The first six batches of approvals issued by the solid waste Center this year totaled 529800 tons. According to a rough estimate, there are still about 200000 tons of approvals available. Coupled with the possible additional approvals that may be added later, they should be able to meet the needs of import enterprises for approvals before July. As for whether the standards of "recycled copper raw materials" and "recycled brass raw materials" can be implemented on July 1 as scheduled, there are still great doubts in the market. Due to the impact of the epidemic, waste enterprises have not yet received the relevant implementation arrangements. We need to pay close attention to the following policy updates and their impact on the import of waste copper.