CST
translation
Source:SMM
Most of the non-ferrous metals closed down today, and Shanghai copper dived at the end of the plate. Due to the early overseas epidemic situation has not significantly improved, external consumption is not satisfactory, LME copper stocks increased sharply.

SMM5 13: most of today's non-ferrous metals closed down, Shanghai copper tail diving. Due to the early overseas epidemic situation has not significantly improved, external consumption is not satisfactory, LME copper stocks increased sharply. Domestic aluminum stocks continued to fall to support aluminum prices, as of May 14, SMM statistics domestic electrolytic aluminum social inventory weekly decline of 114000 tons to 1.058 million tons. It is worth noting that, despite the strong depot, the weak rise in aluminum prices is still likely to be a pullback. Shanghai zinc fell back one after another due to the lack of downstream consumption dragged down, in April the overall start of the die casting zinc alloy plant performance is low, month-on-month, year-on-year decline. According to SMM survey data, the operating rate of die casting zinc alloy enterprises in April was 30.84%, down 14.32 percentage points from the previous month and 23.7 percentage points from the same period last year. Export is generally involved in the end customers of large die casting zinc alloy plants. At present, the export orders are in the doldrums and the terminal starts are declining obviously, which has a great impact on the orders of large die casting zinc alloy plants. "[SMM Analysis] will continue in May after the start of the die casting zinc alloy factory in April?

Black iron ore remained strong, up 1.09%, hot coil up 0.33% thread down 0.52%. In addition to the positive fundamentals of iron ore, the market is also expected to see more stimulus measures to boost the economy, and infrastructure construction will also boost demand. Next week's two sessions are likely to approve more corporate bailouts and increase local government bond issuance to finance infrastructure projects. Recently announced that the overall macro-economy is improving, the scale of social financing has risen sharply, traditional infrastructure has also driven the recovery of the machinery and automotive industry, and short-term building materials will also remain strong.

Crude oil fell 2.89% in the previous period. International oil prices rose on Thursday, buoyed by an unexpected drop in US crude oil inventories, but the increase in oil prices was limited. Oil prices have risen over the past two weeks as some countries relaxed anti-epidemic restrictions and blockades, allowing factories and shops to reopen. But a resurgence of new cases in South Korea and China has heightened fears of a possible recurrence of the epidemic, which will weigh on economic recovery and fuel demand. IEA said in its monthly report that the global oil market is expected to improve as a result of historic production cuts. Global oil demand is expected to fall by 8.6 million barrels a day, the biggest drop in history. 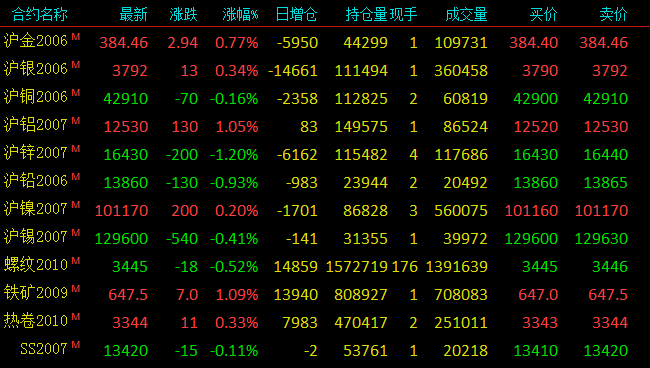 In terms of capital flow, the black chain, as the first choice for funds this week, continues to absorb 890 million funds, and coke replaces iron ore to become the most gold-absorbing variety in the black system. Precious metals capital changes in recent days obvious, Shanghai gold alone more than 700 million funds attention, non-ferrous plate funds continue to lose, Shanghai copper, Shanghai zinc have a large number of funds to leave the market, crude oil fell for 5 days, today there are still more than 300 million funds to enter the market.

Copper: today, the main force of copper in Shanghai opened as low as 42930 yuan / ton in the morning. After the opening, the copper price rose by more than 42930 yuan / ton, and hovered briefly at the position of 43030 yuan / ton. Followed by a continuous increase in short positions, copper prices quickly fell to a daily low of 42800 yuan / ton. At this low, short departure led to a rebound in copper prices, the center of gravity stabilized in 43010 yuan / ton position, midday closed at 43040 yuan / ton. The opening copper price in the afternoon is horizontal plate finishing. Near the close of the long run led to a fall in copper prices, finally closed at 42910 yuan / ton, down 80 yuan / ton, down 0.19%. Within the day, the main force of Shanghai Copper, that is, the 2006 contract, reduced its position by 2358 hands to 113000 hands, mainly for long positions, and the position volume is about to be completed. Next, focus on the monthly change of the main contract; the trading volume decreased by 2.0 hands to 55000 hands. During the month, the contract day reduced positions by 5460 hands to 7015 hands, further narrowing the spread over 06 contracts to around $150 per tonne. In a speech last night, the chairman of the Federal Reserve argued that the US economy faced unprecedented downside risks and refuted the possibility of using a negative interest rate policy at this stage, cooling market risk appetite and keeping Shanghai copper low. Today, Jiangxi Province introduced 16 relevant measures to support the copper industry, including tax incentives, reducing electricity costs and expanding copper consumption, providing a strong support for copper prices and countering market pessimism about the macro-economy falling into recession. The short-term decline of copper in Shanghai in the morning was mainly affected by the fluctuation of international oil prices. At present, Shanghai copper close Yin, but there is still 20, 60 days of moving average support, the long and short sides are still competing for the 43000 pass. Waiting for the guidance of the outer plate at night, test Shanghai copper can rise again, standing on the 43000 yuan / ton level.

Aluminum: the main 2007 contract of Shanghai Aluminum opened at 12435 yuan / ton in the morning. in the first trading stage, it first rose slightly and then fell back to the intraday low of 12410 yuan / ton. after the opening of the second trading stage, aluminum prices rebounded, fluctuated all the way up, and hit the intraday high of 12575 yuan / ton at the end of the day. Near the close, some long positions softened to around 12515 yuan / ton, closing at 12530 yuan / ton, up 145yuan / ton. Up 1.13%, trading volume decreased by 32654 hands to 86524 hands, position increased by 83 hands to 150000 hands, closed at the small positive line, the center of gravity rose from yesterday, but began to break through the upper 60-day moving average signs. Macroscopically, because tomorrow is the implementation day of the second wave of reduction by the central bank, the market atmosphere is expected to be more relaxed, coupled with the delivery of contracts tomorrow, aluminum prices are expected to be on the strong side, and the contract spread between the current month and the far month may be further widened.

Lead: during the day, the main 2006 contract of Shanghai lead opened at 13795 yuan / ton, fluctuated around the daily moving average throughout the day, and the amplitude was about 100 yuan / ton. It finally closed at 13860 yuan / ton, and its position decreased by 983 yuan / ton to 23944 hands, or 0.93%. The Shanghai lead newspaper closed at the lower shadow of the Xiaoyin line, the downward pace slowed, and the medium-and short-term average trend leveled off. from a fundamental point of view, the price of waste batteries is easy to rise and difficult to fall, and it may give lead prices lower support in the short term. It is expected that Shanghai lead will maintain a fluctuating market in the near future and closely follow the changes of lead ingots.

Zinc: intraday Shanghai zinc main force 2007 contract opened at 16630 yuan / ton, at the beginning of the day, driven by the long reduction of positions, Shanghai zinc quickly fell back to 16325 yuan / ton, then V-word reverse backfill day most of the decline to 16420 yuan / ton near narrow fluctuations, long-short game fell into a stalemate, closed down 16430 yuan / ton, down 1.11%, trading volume reduced 24074 to 118000 hands, position volume reduced 6162 to 115000 hands. Period zinc recorded 4 consecutive negative, funds to leave the market, the current domestic fundamentals, the supply side story has not been further intensified, social inventory is also in a relatively abundant level, there is no new story to boost, it is expected that zinc will continue to adjust downwards, looking at the 40-day moving average support strength in the evening.