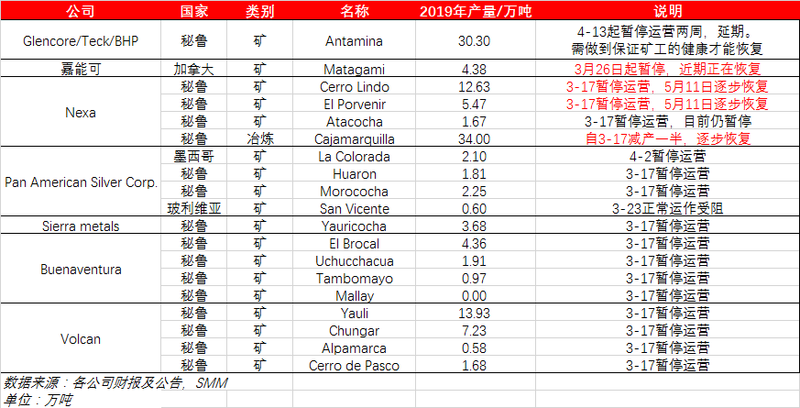 According to a statement issued by Nexa on 12 May, since 15 March, the Peruvian Government has declared a state of emergency, which has affected Nexa's mining operations in addition to key and maintenance activities. In early May, the Peruvian Government announced a decree on the gradual recovery of the economy, allowing mining units with a daily output of more than 5000 tons to resume after adapting to the health agreement issued by the new Government. As a result, production at the, Cerro Lindo and El Porvenir mines will resume from 11 May, and the gradual recovery period is expected to last until the end of June. Activities at the Atacocha mine will continue to be suspended. On the contrary, the Cajamarquilla refinery continues to operate at reduced capacity (50 per cent) and will gradually return to previous production levels. Taking into account the current situation, adjust the 2020 zinc production guidelines to between 300000 and 335000 tons, 11 per cent lower than previously issued, and this guidance needs to be adjusted depending on the recovery of the Peruvian mining industry.

With reference to Nexa's announcement, mines with a daily mining capacity of more than 5000 tons have recovery potential, but as far as the Peruvian miners followed by SMM are concerned, not most of them meet this condition, of which Glencore Quarterly report said that Antamina mine due to relatively serious infection is expected to maintain a short-term shutdown state until the health of miners can be guaranteed; followed by Volcan's two mines Yauli and Chungar, but have not yet seen their announcement.

Overall, the recovery of Peruvian mines has a long way to go, and it may not be a realistic story to resupply the country in June.