SMM: yesterday we released the 2019 annual reports of 13 copper smelters. Today, we will continue to interpret the next part for you.

IV. Annual output of copper concentrate and refined copper in various smelters in 2019 and production plan in 2020 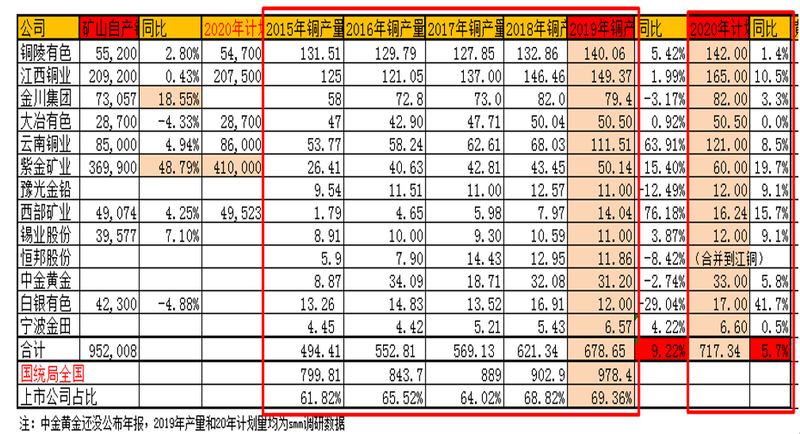 From the picture above, we can see that only two enterprises copper mines (Jiangxi copper and Zijin mining) output of 200000 tons, the rest are less than 100000 tons, it can be seen that the self-sufficiency rate of copper concentrate in China's copper smelters is really too low; fortunately, our smelters are also aware of this, in recent years have increased the acquisition of foreign copper mines. Among them, Zijin Mining has the most outstanding performance, and the results are obvious to all. Copper production has increased by as much as 369900 tons in 19 years, and with the continuous release of production from its mines, Zijin Mining's copper concentrate production will continue to increase in the next few years. In 2020, their target is 410000 tons, an increase of 10.08%, an increase of 40100 tons.

In 2019, the output of electrolytic copper in the 13 copper smelters totaled 6.7865 million tons, an increase of 573100 tons, an increase of 9.22 percent over the same period last year, and a growth rate of more than 9 percent for two consecutive years (9.17 percent for 18 years). It is a veritable year of production, and the growth rate is expected to decline in the future. According to the National Bureau of Statistics, the national output is 9.784 million tons, and these 13 enterprises account for 69.36% of China's total electrolytic copper production, an increase of 0.54% over the same period last year. We expect that with the release of new production capacity, the industry concentration will continue to increase in the future.

Specific to the situation of various smelters: because 19 years is the big year of maintenance, five smelters have reduced production as a result, of which the biggest drop is the silver non-ferrous metal drop of-29.04%. The reason for such a big decline is that the company's new flash furnace was successfully ignited in May and in the second half of the year was in a state of trial production. The biggest increase was the 76.18% increase in the western mining industry, mainly due to the smooth commissioning of its Qinghai copper industry at the end of 18 years. The largest increment was in Yunnan Copper, with an increment of 434800 tons in 19 years; Southeast Copper reached the production standard in March 19; the first production line of Chifengyun Copper was tested with load in May and reached the production standard in August; the second production line was tested with load in October and reached the production standard in December.

In addition, statistics on their production plan for 2020 show that total production will be 7.1734 million tons in 19 years, an increase of 386900 tons, or 5.7 percent. Of these, the largest increase was Zijin Mining, which reached 98600 because its Heilongjiang Duobaoshan copper industry (with an annual production capacity of 150000 tons) was put into production at the end of 19 years and will reach full production in 20 years. Second, Yunnan Copper, which plans to add 94900 tons, is due to its second Chifeng Yun copper production line reaching production standards in December 19. Overall: no smelter plans to reduce production in 2020; however, due to the spread of the epidemic in a large area of the world in 2020, mine production in various countries has been seriously affected, and whether the smelters can complete the plan is uncertain.

Today, the world is facing a great change that has not been seen in a hundred years, and the characteristics of the accelerated evolution of the great change in the world are becoming more obvious, the global resource nationalism and protectionism is on the rise, and the trade friction between China and the United States is showing long-term nature, regionality and complexity. China is in a public relations period of changing the mode of development, optimizing the economic structure and changing the driving force for growth, and the structural, institutional and cyclical problems are intertwined and the impact continues to deepen. The macro situation is complex and changeable, the unstable and uncertain factors are increasing, and the risk challenges are aggravated.

In addition, the epidemic caused by the new crown virus has spread in many countries around the world, and friction between China and the United States has made waves again. If the overseas epidemic is not quickly and effectively controlled, which in turn triggers the financial crisis and the global recession, copper consumption will also be greatly affected.

From the perspective of industry fundamentals:

Supply side: in the past 20 years, the world still has more than 500000 tons of new smelting capacity put in; however, affected by the epidemic, global mine production has declined, and the zero single price of copper concentrate has continued to decline since mid-February, from a peak of $71 / ton to $54.50 / ton in mid-May. It is expected that it will be difficult to show a significant improvement in the short term, and the net profit of smelters in the past 20 years is expected to continue to decline. In addition, the price of sulfuric acid, an important by-product, is still hovering low this year, making it difficult for smelters to boost profits. The only thing to look forward to is that the price of gold and silver is high, which will contribute to the profits of the smelter.

Demand side: as the epidemic spreads around the world, countries have restricted travel and production. As of mid-May, the ban has not been lifted in most parts of the world, and the demand side has been severely affected. Only a few countries, such as China, have largely returned to normal. Moreover, in order to deal with the impact of the previous epidemic, the central and local governments have issued a number of policies to promote epidemic prevention and control and economic and social development as a whole, and give support to companies in finance and taxation, reducing costs, stabilizing posts, entrepreneurship, finance, and so on. And accelerate the deployment of "new infrastructure construction", including 5G base stations, UHV, intercity high-speed railway and urban rail transit, new energy vehicle charging piles, big data centers, artificial intelligence, industrial Internet and other seven major areas. The development of the above industries is highly related to the application of copper and copper-based materials, which brings new increments to copper consumption and is the bright spot of copper consumption growth in the past 20 years.