SMM5 month 13: the morning non-ferrous metals market continued the night market decline, in yesterday's PPI and other macro data is not as expected and the outbreak of the second outbreak of concern under the market rally is difficult to maintain. Shanghai copper opened low in the morning, Zambia temporarily closed its border with Tanzania, and copper exports through (Dar es Salaam), the capital of Tanzania, were delayed. According to SMM, the news could affect China's imports of anode copper from Zambia. Due to the scarcity of ports in Zambia most of the goods will be shipped from Tanzania to other countries. According to SMM research data, the overall operating rate of copper strip and foil enterprises in April was 68.30%, down 4.86 percentage points from the same period last year and 4.77 percentage points from the previous month. In April, the operating rate of copper strip and foil decreased to a certain extent, mainly due to the over-expected recovery of the copper strip operating rate in March this year, due to the influence of the previous epidemic on the accumulation of backlog orders to March and other factors "to view the details of lead," due to the low dominant inventory base of lead ingots and the existence of maintenance of primary lead, the expectation of immediate accumulation is gradually realized, which is reflected in the volume in May or limited. It is expected that in the middle and late May, lead will continue the trend of horizontal concussion, while spot lead may fall below the Wansi barrier due to the gradual easing of supply, and is expected to run at 13600-14250 yuan / ton.

The black series mine rises and falls, the long process steel plant increases the production enthusiasm, the demand for raw materials increases, the scrap price rises again recently, the electric furnace steel mill is squeezed by the increase in raw material prices. On the demand side, downstream terminal demand is temporarily stable, and apparent consumption is expected to increase this week. The arrival of hot rolls this week is slightly lower than last week. Among them, the arrival volume of Shanghai and Lecong remains low, while that of Tianjin is higher than the normal level. It is still mainly affected by the price difference between the north and the south, and the southward movement of northern resources is blocked. Follow-up pay attention to the impact of rain in the south on the construction progress. Iron ore shipments in Brazil fell slightly from the previous month, and supplies in Australia were tight again as a result of a marked reduction in shipments at ports last week. The iron ore maintains a strong concussion in the short term.

Crude oil fell 1.68% in the previous period. International oil prices fell in early trading in Asia on Wednesday after industry data showed a rise in US crude inventories and growing fears of a second outbreak in countries where blockades were relaxed. Saudi Arabia further called for more production cuts to promote market balance. Saudi Arabia said earlier this week that it planned to increase production cuts again to slow down the accumulation of stocks. July Brent crude futures fell 54 cents, or 1.80 percent, to $29.44 a barrel. Us July crude oil futures fell 45 cents, or 1.7 percent, to $25.88 a barrel, up nearly 7 percent the previous day.

The trading was suspended at noon. 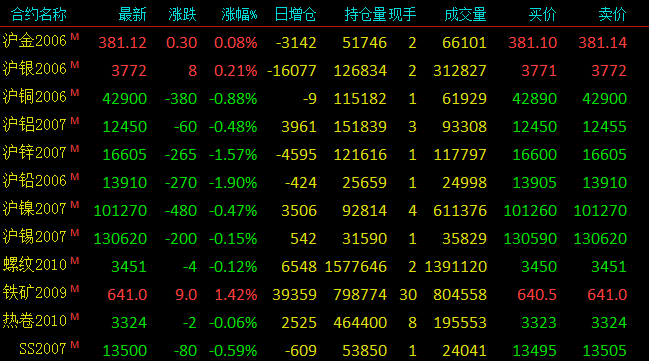 The mainstream transaction of Guangdong zinc was 16570-16680 yuan / ton, and the quotation focused on 10-30 yuan / ton of Shanghai zinc 2006 contract. The discount of 110 yuan / ton in Guangdong stock market was 10 yuan / ton less than that of the previous trading day. In the first trading session, futures prices opened low and went low, the holding price of the holder was strong, the overall market quotation was higher than yesterday, the downstream bargain inquiry increased, and the market transaction was OK. Kirin, Mengzi, Tiefeng quoted water for the Shanghai zinc contract in June to rise 1550 yuan / ton. The second trading session, prices rebounded, downstream demand weakened, traders to maintain the value of normal shipments, part of the realization of active price adjustment shipment, spot rising water slightly lower than the first trading session, overall, today's downstream demand is better than yesterday. Kirin, Mengzi, Huize and Tiefeng are quoted for the June contract to raise water by 10 murals of 20 yuan / ton to Pingshui. Yi Qilin, Mengzi, Tiefeng mainstream transaction in 16570-16680 yuan / ton.