CST
translation
Source:SMM steel
According to the SMM survey, the blast furnace operating rate in April was 86.4%, up 2.3% from the previous month. It is estimated that there is still room for increment in May, but the range is relatively limited. The recovery of blast furnace operation rate mainly comes from maintenance and resumption of production. The overhaul in May affected 186000 tons of building materials, down from 745000 tons in April. The influence of hot coil maintenance is about 150000 tons, and the maintenance and resumption of production is about 250000 tons. On the whole, the resumption of blast furnace production is more common.

Although there is still incremental space on the supply side, the blast furnace operating rate is only one step away from the highs of previous years, and some steel mills have reached full production, while electric furnace plants are subject to scrap steel and meagre profits. At the same time, the demand side shows full toughness, especially in the terminal industries related to infrastructure, such as construction machinery, pipe plants, commercial vehicles, and so on. Among them, in April, the production and sales of commercial vehicles completed 514000 and 534000 respectively, with monthly production and sales reaching an all-time high, up 31.3% and 31.6% respectively over the same period last year. Among them, heavy goods vehicles grew rapidly, with production and sales of 175000 and 191000 respectively, up 48.3 percent and 61.0 percent respectively over the same period last year, reaching the highest level in the history of monthly production and sales. Under the support of strong demand, the rebound on the supply side has suppressed prices, but still does not change the pattern of medium-term rebound. 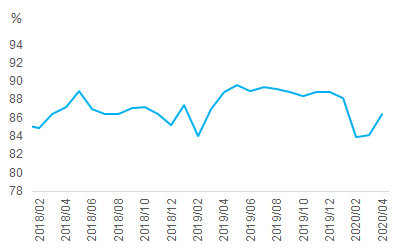 Steel Plant A (Southwest): at present, it is in full production, but there is still 15-200000 / month capacity has not been opened, look at the later situation to open again. The freight for imported mines is 170. At present, the stock of finished materials in the factory is more, mainly reducing the warehouse, which is now 1.7 times higher than that of the same period last year. Kunming Iron and Steel City accounts for 40%, the recent demand is good, the shipment is good.

Steel Plant A (Southwest): full open, there is a little increase in production by adding scrap, the current gross profit of 100-200.

Steel Plant B (Central China): in May, like other steel mills, the cold system is not good, and the hot coil is OK. A new line is planned next month, because there is not enough hot metal, so the proportion of scrap steel will be raised.

Steel Plant D (Northeast): the overhaul and resumption of the No. 8 blast furnace on May 8 resulted in an increase in the output of all varieties. Among them, the heat coil increased by 190000 tons (blast furnace recovery + cold heat transfer).

Steel mill E (North China): blast furnace overhaul and resumption of production this month, hot rolling output increased by nearly 120000 tons. All blast furnaces are in normal production and the rolling line is in normal operation.

Steel Plant F (East China): a blast furnace was overhauled last month, affecting about 100000 tons of molten iron. The overhaul was completed in early May, and the output basically returned to normal.

Steel mill G (northwest): from March to April, two blast furnaces were in the state of maintenance, and the full production resumed in the middle and late April, mainly because they were more optimistic about the future. More projects have been signed this year, with a small reduction in the volume of investment to the market. But there are concerns about the hot weather from July to August.

Steel mill H (East China): the blast furnace has always been in a state of full production, the production line of pre-maintenance was also completed at the beginning of this month, the industrial wire rod turned to thread, and the output of disk snail increased by 20,000 tons. The overall market for the future cautious attitude.