CST
data analysis
Source:SMM
Planned output of construction steel rebar across China’s major blast furnace steelmakers in May rose 15.24% from the planned production in April to 9.16 million mt,  on the back of steelmakers return from maintenance and diverted capacity to rebar in the chase of higher profits, showed an SMM survey.

SHANGHAI, May 12 (SMM) – Planned output of construction steel rebar across China’s major blast furnace steelmakers in May rose 15.24% from the planned production in April to 9.16 million mt, on the back of steel plants return from maintenance and diverted capacity to rebar in the chase of higher profits, showed an SMM survey.

The amount of planned rebar output for domestic trades increased 15.97% on the month in May as the coronavirus pandemic outside China depresses export orders from Chinese steel mills.

Scheduled production of wire rods in May, meanwhile, expanded 17.23%, or 392,000 mt, from the planned output last month, with the amount for domestic sales 25.27% higher.

A slew of steel mills have recovered from maintenance. According to steelmakers maintenance schedule released as of May 11, planned overhaul across steelmakers in China is likely to reduce long steel (rebar and wire rods) production by 185,600 mt in May. This stood significantly lower than the affected volumes of 754,800 mt in April. 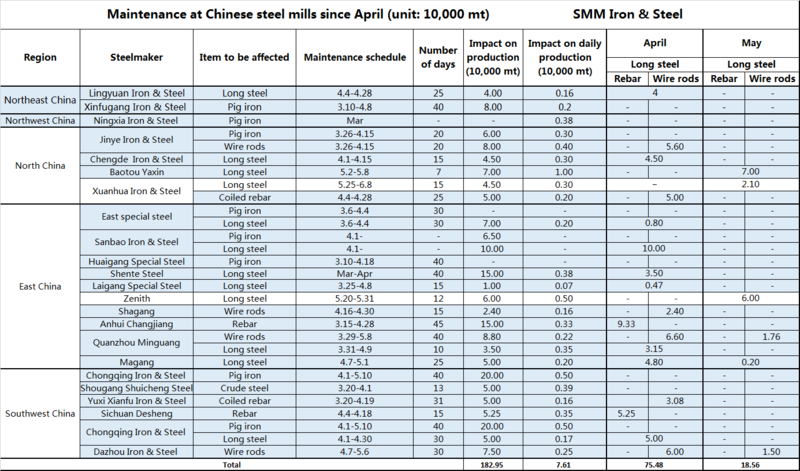 Note: The information is based on steelmakers maintenance schedule released as of May 11. Steel mills marked in light blue have concluded maintenance and restarted production.

Higher profits of rebar also prompted steel mills to ramp up production of rebar at the expense of other steel types. SMM assessed that rebar profits at steelmakers were 161.7 yuan/mt higher than profits of hot-rolled coil as of May 11. The shift of capacity is estimated to trigger an increase of 217,000 mt of rebar output in May, according to SMM survey.

Scheduled rebar production in north-west China increased 15.77% from a month ago in May, driven by the termination of maintenance at two major steel plants.

In north China, the planned rebar output for May was 16.29% higher, as steel mills continued to shift capacity to rebar. Resumption of demand and improved shipments in the northern region significantly reduced inventory pressure and bolstered production enthusiasm at local steel mills.

Planned production of rebar in north-east China expanded 20.31% in May.

In east China, planned rebar production for May is assessed to rise 13.92%, primarily due to the resumption of operations from concentrated overhaul in April.

In central south China, planned rebar output for May expanded 14.74% as steel mills returned from maintenance and hiked production by using a greater proportion of steel scrap. 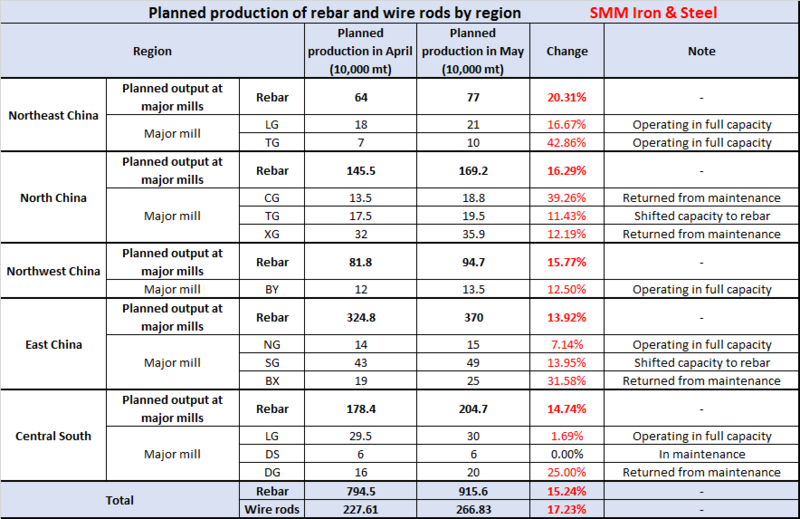 Even as production expands, SMM expects spot prices of rebar to be supported in the near term as demand remains strong and any further increase in the supply pressure will be limited with most steel mills running at full capacity in May. Those steel plants have kept ramping up production since the second half of April.

Long steel social inventories in Guangzhou shrank 6.8% on week
Social inventories of long steel (including wire rods and rebar) in Guangzhou posted slower declines this week, decreasing 6.83%, or 120,200 mt, from a week ago to 1.64 million mt as of Wednesday May 20, smaller than a drop of 9.53% in the previous week, showed SMM data.