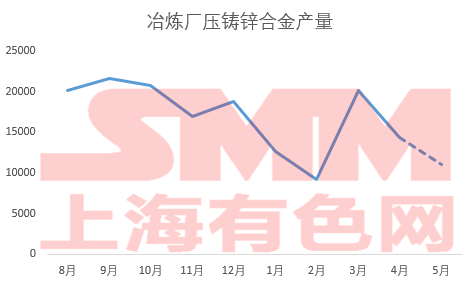 In February, under the influence of the shutdown of production and maintenance and the postponement of the resumption of work at the terminal after the Spring Festival, the output of die-cast zinc alloy dropped significantly. With the effective control of the domestic epidemic situation, the terminal actively resumed production, and the aspect of domestic demand continued to improve. The terminal was also catching up with the pre-export orders. At the same time, driven by the replenishment demand brought about by the falling price, the market demand increased significantly. It also pushed up the rapid recovery of die-casting zinc alloy production in the smelter in March. However, with the outbreak of the overseas epidemic, the terminal suddenly found that overseas orders plummeted. The downstream consumption of die-casting zinc alloy, such as Japanese hardware, auto hardware accessories, locks, sanitary ware, toys, zippers, electronic products, etc., is also inseparable from export. the main places of export are the United States, Japan, Germany, the United Kingdom, Russia, South Korea, Australia, India, Canada and other countries. In April, smelters cut production of die-cast zinc alloys to increase output of zinc ingots amid falling overseas demand.

At present, terminal foreign trade orders still have not improved significantly. Although many overseas countries have begun to resume work and resume production, the demand has not been reflected in the short term. Whether overseas orders will improve or not will not be determined until late May at the earliest. In the case of no significant improvement in short-term demand, we expect the smelter die-casting zinc alloy output to be further reduced.