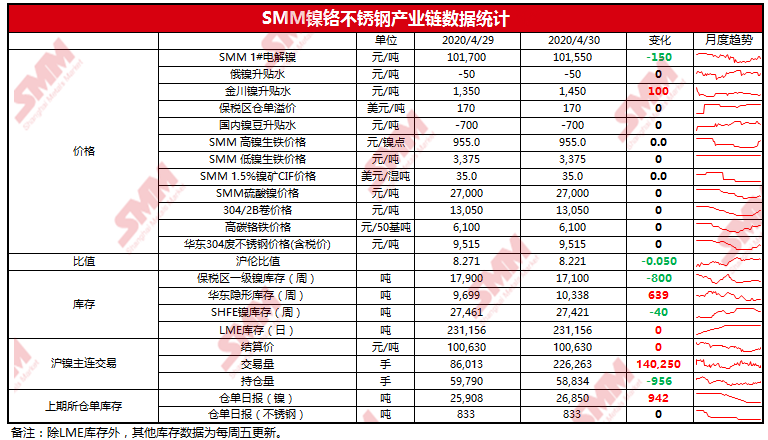 The worker protests at the Weda Bay project in Indonesia during the holiday period have aroused market concern, but at present it does not seem to have an impact on the continued operation of the plant and nickel supply, while the positive stimulus expected from the macro perspective has not appeared, the negative news has continued to put pressure on major metals, and the development of the epidemic and concerns about the pressure on crude oil prices have not further improved. Lunni continued to fall worse than expected during the holiday period. However, on the fundamentals, the high scheduling of stainless steel plants can form a basic support, allowing nickel prices to avoid giving back all increases, and prices are expected to continue to fluctuate and consolidate after the festival. Lunni $11600-12000 / ton; Shanghai nickel 96000-101000 yuan / ton.

After entering May, the impact of overseas epidemic fermentation on domestic manufacturers will be more obviously transmitted, although for China, nickel and the main consumer end of stainless steel dependence on export is not high, but will also be affected one after another, it seems that stainless steel plants can relatively ensure a strong start, pay attention to the maintenance of downstream consumption.

1. In the nickel spot market, the atmosphere of stock preparation was light in the last week before the festival. On Monday, the nickel price rebounded, boosted by the news of the domestic commercial reserve, and the market almost entered the holiday mode in the next three trading days. SMM1 nickel price within the week quoted at 99850-104200 yuan / ton, Russian nickel, for four consecutive days in the market quoted between 100 yuan / ton to Pingshui (Shanghai nickel 2006 contract). As the source of imported goods entered the country at the beginning of the week, the holder overreported the discount shipment, while the original inventory traders still reported in Pingshui because of the limited cost reduction. Jinchuan nickel, reported in Shanghai nickel 2006 contract rose 1200-1500 yuan / ton. Jinchuan did not arrive in Shanghai, most traders have less inventory, but consumption is also weak. It is expected that the post-festival spot market, Russian nickel due to sufficient supply, discount may have a certain downward space; Jinchuan nickel still need to pay attention to the recent shipments of manufacturers.

2. Before the festival, the price of high nickel pig iron runs flat at 950-960 yuan / nickel point (including tax). The iron factory quotation rises further, the high level has reached 1010-103 yuan / nickel point (including the factory tax), regarding this high price, the steel mill expresses temporarily difficult to accept. After the festival, nickel iron still has the possibility of rising slightly, it is expected that the factory will be difficult to break 1000 yuan / nickel point in the short term. Supply side: nickel mine exports will gradually return to normal in May, the shortage of domestic raw materials will be gradually alleviated, the Indonesian epidemic situation will not affect exports, Indonesia's iron plant production plans will also advance as scheduled, although the domestic production reduction efforts are relatively large, but the main production reduction manufacturers are still large nickel and iron plants, after the restoration of raw material supply, the possibility of increasing production in large plants can not be ruled out. According to market research, although the supply of nickel and iron has recently tightened, it is still not in a state of tension. Demand side: the stainless steel plant is expected to schedule production in May compared with April is still a small increase, the demand side basically maintained a stable state. In addition, the ore price may rise slightly after the export of nickel ore resumes in May, which supports the price of nickel and iron, but the profit of stainless steel tends to shrink and the increase is expected to be limited.

3. Before the festival, the prices of stainless steel in Wuxi area are still quoted flat, 304 2B rough edge volume price is quoted at 12800-13300 yuan / ton, 304 2B state-owned cutting edge is quoted at 13200-13400 yuan / ton, and 304 NO.1 is quoted at 12600-12900 yuan / ton. After the return of the holiday, with the gradual arrival of orders in May, the volume will be replenished to a certain extent, and whether the price can be stabilized remains to be seen. In addition, a week before the festival, Jiangsu Delong pulled 30,000 tons of 304 four-foot hot rolling resources back to the factory and processed them into 304 four-foot cold rolling resources before entering the market. After Labour Day short holiday, this batch of 30,000 tons 304 four feet resources may enter the market with cold rolled products, which may put pressure on the cold rolling price trend of 304.