CST
translation
Source:SMM
Today, the non-ferrous market as a whole fluctuates little, with ups and downs on each other. According to the latest customs data, imports of copper concentrate in March 2020 totaled 1.779 million tons, an increase of 0.68 percent over the same period last year.

SMM4 30: the non-ferrous market as a whole today is not big fluctuations, mutual ups and downs. According to the latest customs data, imports of copper concentrate in March 2020 totaled 1.779 million tons, an increase of 0.68 percent over the same period last year. SMM believes that imports of copper concentrate fell month on month in March but increased slightly compared with the same period last year. As domestic smelting activities were affected by the epidemic in February, there was uncertainty about future production expectations. Some refineries chose to postpone the shipping date, taking into account the fact that the decline in the logistics cycle of imported copper concentrate began to appear in March. "[SMM analysis] the impact of increased imports around South America on copper concentrate imports or aluminum began to appear after April. Recently, there has been a wave of price increases in the aluminum market. Most aluminum processing enterprises, represented by aluminum profiles and aluminum plates and strips, have raised their original product processing fees by 100-300 yuan / ton. Spark market discussion. If the exuberant consumption in the later stage can continue, the aluminum factory has more say in maintaining the price increase; in addition, we need to pay attention to the changes in the price of raw materials such as aluminum ingots and roll-casting coils. For aluminum mills, it is better for them to keep the price of raw materials stable. "see the details

Black rose strongly in the last trading day before the holiday, with iron ore threads up more than 2 per cent and hot rolls up 1.7 per cent. Yesterday's Politburo meeting stressed the stabilization of economic fundamentals, accelerated construction of traditional and new infrastructure, and increased demand for building materials. And today's data show that this week's steel inventory removal rate significantly improved, down more than 2 million tons from the previous month, the reduction has clearly boosted market confidence. Looking forward to May, with the continued weakening of the marginal impact of the epidemic and the release of favorable policies, the overall performance of the black system will be stronger than in April. "View details

Crude oil rose 3.29% in the previous period. Crude oil futures jumped on Thursday on signs that excess crude oil in the United States was growing at a slower-than-expected rate and that fuel demand hit by the new crown epidemic restrictions began to rebound. Us crude oil stocks rose 9 million barrels to 527.6 million barrels last week, slightly below analysts' expectations of an increase of 10.6 million barrels, the (EIA) said on Wednesday. Gasoline stocks fell for the first time in five weeks, and demand for fuel oil caused by the coronavirus epidemic is weakening. "if this trend continues in the coming weeks, it could be a sign that the oil market trough is over," said the head of commodities strategy at ING. 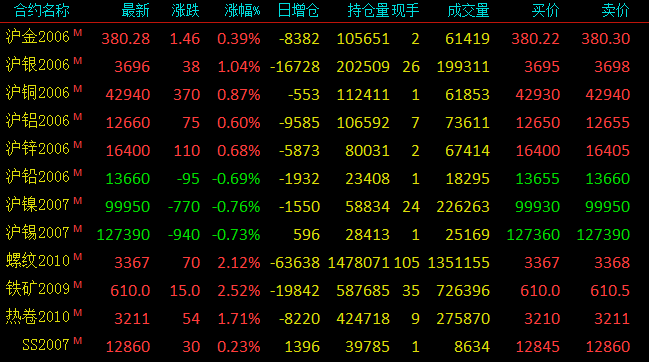 In terms of capital flow, affected by the increase in the margin of some varieties by the pre-festival exchanges, the inflow of funds into the commodity index reached 28.566 billion yuan, while reducing positions by 720000 hands.

Copper: today, the main force of Shanghai copper skydiving high in the morning opened at 42780 yuan / ton, just opened into the air to press the copper price to the lowest point of 42650 yuan / ton in the day. Then copper prices quickly rebounded and kept rising, climbing all the way to 42900 yuan / ton. Copper prices fell slightly by noon to close at 42820 yuan per ton. In the afternoon, the long market opened one after another, and copper prices rose again. At this high position, many leave the field. Near the close, the bulls again rushed to a daily high of 42980 yuan / ton, closing at 42940 yuan / ton, up 370 yuan / ton, or 0.87%. The daily position of the main force of Shanghai copper decreased by 553 hands to 112000 hands, mainly by short positions, and trading volume decreased by 4653 hands to 62000 hands. The Shanghai Copper 2005 contract continued to reduce its position by 3146 hands to 41000 hands. Shanghai Copper 2007 contract day to increase positions by 3245 hands, mainly for the long increase in positions. In the morning, the National Bureau of Statistics released China's April PMI index. The official manufacturing PMI index for April was 50.8 per cent, down 1.2 percentage points from the previous value, while the composite PMI output index was 53.4 per cent, up 0.4 percentage points from the previous month. Manufacturing PMI recorded more than 50 ups and downs in April, indicating that the manufacturing sector still improved in April from March, and the market is expected to further strengthen copper demand. In addition, the Fed today reiterated its commitment to zero interest rates, which remained at 0%-0.25% in April, and said it would take all necessary measures to support the economy, boosting market confidence and providing momentum for copper prices to rise. At present, Shanghai copper closing Yang, the top touched the 60-day moving average, has made up for the previous jump gap. Today, the outer plate strongly pulled up, short fled before the festival, bulls into the market, pay attention to the guidelines of copper during the festival, test whether the copper price can stand on the 43000 yuan / ton level.

Aluminum: on Thursday, the main Shanghai aluminum company opened at 12610 yuan / ton in the morning. After the opening, the bulls continuously reduced their positions in the main contract by nearly 7, 000 hands. In the afternoon, the price difference of 0506 contract once expanded to 220 yuan / ton. At the end of the day, the price difference between short and short positions was reduced by more than 2600 hands. The hourly line pulled a Changyang line, closed at 12660 yuan / ton, up 75 yuan / ton, up 0.6%, trading volume decreased 23539 hands to 73611 hands, short unilateral position decreased 9585 hands to 107000 hands. The main reason is to reduce short positions. Before the end of the day, the bulls moved their positions one after another to the 2007-2011 contract, and they were more emotional about the price trend after the festival. Fundamentals, SMM statistics of domestic electrolytic aluminum social inventory 1.204 million tons, weekly decline of 155000 tons, re-record high, smelter shipments less superimposed demand to maintain, resulting in the spot market to maintain a relatively strong water level, in recent months back structure further expanded. It is expected that on the first trading day after the return of May Day, aluminum prices will remain high under the support of fundamentals, with an operating range of 12500-12800 yuan / ton.

Lead: within the day, Shanghai lead opened at 13800 yuan / ton, the first long choice of high departure, Shanghai lead shock downward, low once reached 13625 yuan / ton, after the basic low shock, finally reported at 13660 yuan / ton, down 0.69%. From the trend point of view, lead prices are in a state of decline, has not yet stepped out of a clear unilateral downward trend, the low first test 13500 yuan / ton support, and focus on overseas news during the holiday period.