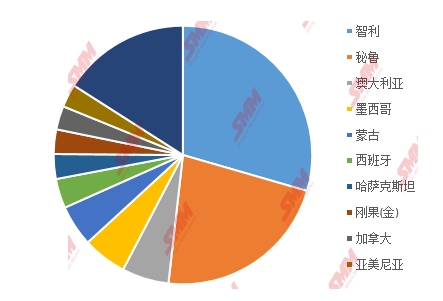 SMM believes that imports of copper concentrate fell month-on-month in March, but increased slightly year-on-year for the following reasons:

First, due to the impact of the epidemic on domestic smelting activities in February, there is uncertainty about future production expectations, and some refineries have chosen to postpone the shipping date and reduce the volume of purchases in recent months, taking into account that the reduction in the logistics cycle of imported copper concentrate began to appear in March. as a result, the month-on-month ratio decreased to a certain extent.

In addition, imports of copper concentrates from Australia, Mongolia, Kazakhstan, Saudi Arabia and other countries have increased significantly, mainly due to overseas epidemic fermentation after entering March, especially in South American countries. After the gradual resumption of production activities, domestic refineries have increased the procurement of near-ocean copper concentrates for reserves, and these countries of origin have a relatively short logistics cycle and can usually be transported to China within three weeks after purchase. As a result, there was a significant increase in imports in March.

Taken together, SMM expects imports of copper concentrate in April to be around 1.6 million physical tons.