CST
translation
Source:SMM
According to recent data released by the General Administration of Customs, China's aluminum plate and strip exports totaled 256000 tons in March 2020, up 61.03 percent from the previous month and 4.42 percent from last year, and monthly exports refreshed the highest level since July 2018. 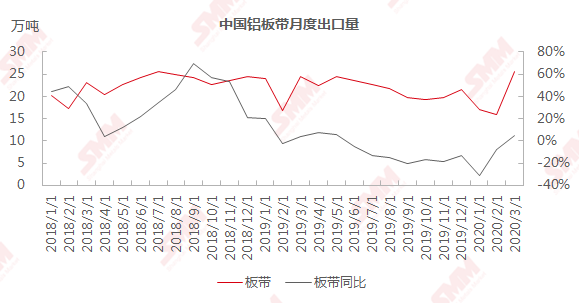 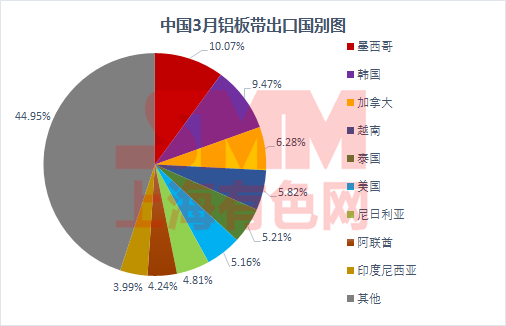 In March, the export volume of aluminum plate and strip increased greatly, mainly due to the influence of Spring Festival factors. Because the Spring Festival holiday in 2020 is earlier than in previous years, the time for enterprises to stop shipping and holiday has also been advanced. Under the background of domestic logistics hindered by the epidemic situation in February, there are some export volumes behind. From historical data, China's aluminum sheet and strip exports from January to February were only 328900 tons, down 19.58% from the same period last year, and in March there was a significant increase in exports compared with 1-2 months. In addition, the depreciation of the RMB in March compared with January-February and the higher Shanghai-London ratio also contributed to the growth of exports to a certain extent.

As far as the export situation in April is concerned, large aluminum plate and strip enterprises in Henan, Shandong, and Fujian, which account for a relatively high proportion of domestic exports, have given feedback. After mid-March, the severity of the epidemic abroad has obviously escalated, and some countries have even closed down their ports. Maritime logistics and transportation has been greatly affected, and after the epidemic has led to the suspension of production by overseas factories, overseas customers often choose to withdraw orders or delay delivery for a long time, resulting in a significant decline in their own foreign trade orders. A Shandong company reported to SMM that its new export orders in April were 30%-40% lower than in March, and it was hard to say how to improve in May-June. At present, there is no clear inflection point for the overseas epidemic, we expect the export volume of aluminum sheet and strip to fall back in April.