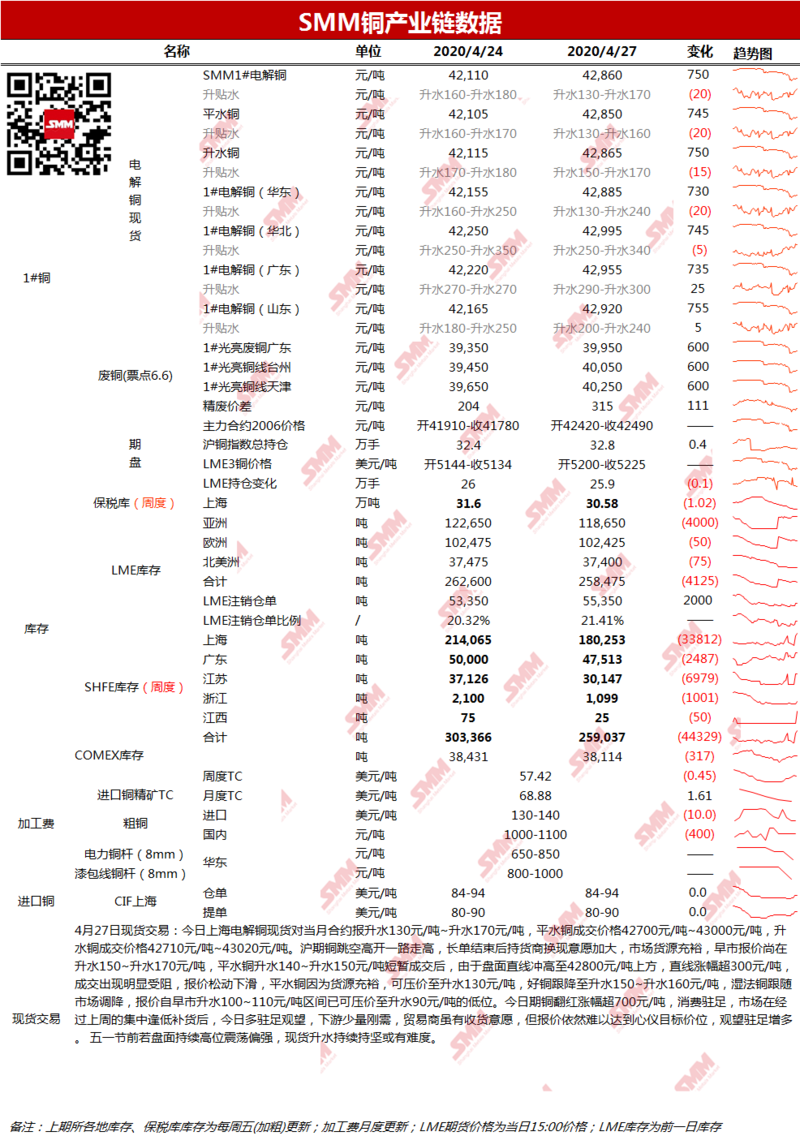 [4.28 SMM Bronze Morning meeting minutes] Macro aspect: 1) Hassett, Chairman of the White House Council of Economic Advisers: the US GDP will record the largest negative value since the Great Depression in the second quarter, probably from-20% to-30%, and GDP may record positive growth in the third quarter. [bearish] 2) the Bank of Japan kept interest rates unchanged around-0.1 per cent and the 10-year Treasury yield target of 0 per cent, both in line with market expectations. The BoJ expanded its stimulus measures, stepped up credit support for companies, expanded its purchases of corporate bonds and bills, further bought Treasury bills and treasury bonds, and allowed unlimited purchases of government bonds. [Lido] 3) it is reported that the European Commission may announce further relaxation of banking capital rules on Tuesday to help banks continue to lend to companies hit by the epidemic. The UK has also announced the launch of a microcredit scheme for small businesses. [Lido] fundamentals: 1) Copper concentrate global mining giants BHP Billiton (BHP) and Glencore (Glencore) 's Peruvian Antamina copper mine on Monday reported 210 new cases of the virus. The company said in a statement that 87 percent of the cases were asymptomatic, while most of the symptomatic infections were mild. The Antamina copper mine said two weeks ago that it would suspend operations for at least two weeks to slow the spread of the virus. The timing of the restart is uncertain. [Lido] 2) the price difference of scrap copper yesterday was 315 yuan / ton, calculated as 6.1%. Copper prices rose sharply yesterday, fine waste price spread continues to widen, but has not yet returned to a reasonable range. Scrap copper traders take advantage of high profit shipments, downstream manufacturers continue to actively receive goods to replenish inventory, because the supply is small, the overall supply in short supply has not changed much. [Lido] 3) imported copper suffered an import loss of around 40 yuan / ton yesterday. The activity of the foreign trade market was weaker than that of last week, and the overall performance of the transaction was light. Recently, traders' offers are mainly concentrated in bills of lading in mid-late May and early June, and there is almost no gap with QP5's monthly quotations, and individual traders further raise their quotations. Buyers are afraid to wait and see, and there are few transactions in the market. A small number of warehouse receipts are still quoted in May. 4) stocks of LME copper stocks decreased by 4125 tons to 258475 tons on April 27, while copper warehouse receipt stocks in the previous period decreased by 14090 tons to 105216 tons. [neutral] 5) spot East China: on the spot side, consumption stopped after the copper price rebounded. After last week's concentrated bargain replenishment, the market stopped to wait and see today, and a small number of just needed downstream, although traders are willing to receive the goods, but the quotation is still difficult to reach the desired target price, wait and see stop to increase. Before May Day, if the disk continues to high shock on the strong side, spot water continues to maintain a strong or difficult. It is estimated that the water will rise by 140 yuan to 150 yuan per ton today. South China: Guangdong electrolytic copper spot contract rose 290 to 300 yesterday. In the spot market, stocks in Guangdong continued to fall sharply over the weekend, spurring holdings to insist on high water shipments. Morning quotations were generally about 30 yuan / ton higher than on Friday, but as copper prices rose sharply and downstream reception sentiment declined, holders slightly lowered their quotations for shipments. Wet copper supplies continue to be tight. Overall, due to copper prices and rising water are higher, the downstream desire to receive goods is low, the market trading is general. Copper price and forecast: last night, Lun copper closed at $5186 / ton, down 0.04%, trading volume of 14000 hands, long position reduction of 1778 hands to 258000 hands. Copper prices fell sharply last night, recovering the rise in copper prices brought about by good gains in the morning. The fall in copper prices last night was mainly due to another setback in crude oil, which closed down more than 20 per cent in June, dragging down copper prices. At present, on the macro side, the market has reduced the safe-haven demand for the dollar as some countries gradually unseal and boost their willingness to take risks. Fundamentals, the gradual intensification of the epidemic in South America, continues to arouse market attention to the raw material end. In addition to the outbreak in Ecuador, the Antamina copper mine announced on Monday that 210 cases had been confirmed, although the government's subjective willingness to unseal has increased, but there are huge challenges to epidemic prevention in South America. Copper prices are expected to be supported macroscopically and on the supply side today. It is estimated that today's copper is US $5180-5230 / ton and Shanghai Copper 42000-42500 yuan / ton. Perch