Comparative Diagram of Zinc concentrate imports from 2019 to 2020 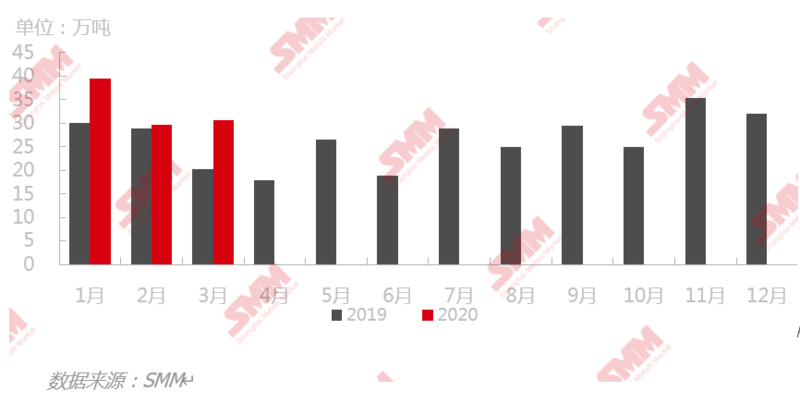 According to SMM, imports of zinc concentrate rose sharply in March from a year earlier, but the reasons for the month-on-month comparison were as follows:

First, the domestic mining and metallurgical negotiations continue, although the processing fees have been reduced, but it still can not prevent many mines from delaying the start-up time, or reducing production, controlling sales, etc., and reducing losses during the fall in zinc prices. As a result, most of the domestic smelters are faced with the problem of shortage of raw materials. The obvious increase in the demand of smelters for imported ores is the main reason for the increase in the import of zinc concentrate.

In addition, imports of zinc concentrates from countries such as Spain, South Africa, Kazakhstan and Saudi Arabia increased significantly, compared with the combined figures from January to February, making up for some of the reductions in Australia and Peru. Due to the impact of the epidemic in Peru, the output of some mines closed in the early stage has been affected to a certain extent, resulting in a significant reduction in the amount of zinc concentrate imported into the country.

In April, domestic mining enterprises basically returned to normal production, but due to the low zinc price eroded mine profits, domestic mines are still deliberately controlling sales. Domestic demand for imported zinc concentrate is expected to increase further in April. However, due to the epidemic in Peru, Australia and Spain and other countries affected by the epidemic in some port operations, shipments or month-on-month decline.

Overall, SMM expects imports of zinc concentrate in April to be around 250000 physical tons.