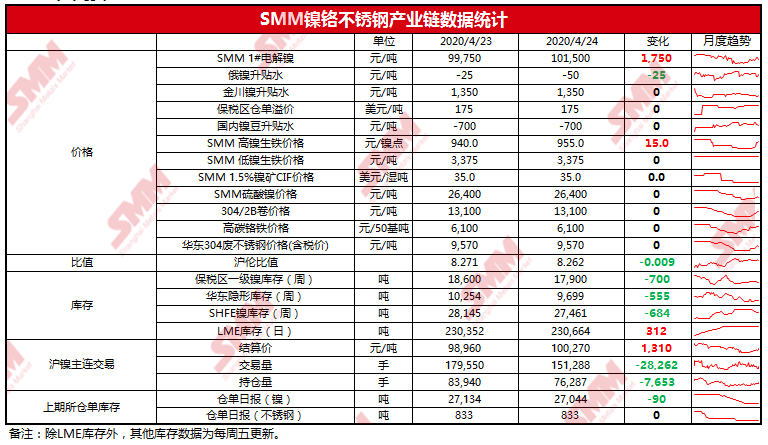 Macroscopically, nearly 2.95 million new crown pneumonia cases have been confirmed in the world. New crown deaths in Italy, France and Spain have dropped to the lowest in more than a month. The number of new deaths in Britain and New York is the lowest since the end of March. Italy will gradually lift the epidemic prevention blockade from May 4, and Spain and France are also considering similar measures. [Lido] the Bank of Japan will hold a monetary policy meeting today, or discuss unlimited bond purchases, and this week will also usher in the decisions of the Federal Reserve and the European Central Bank. Economists expect the European Central Bank to announce an increase in bond purchases as soon as Thursday. [Lido] Saudi Arabia has begun to cut oil production, ahead of the date agreed by the OPEC+ to implement the May 1 cut; The Ministry of Finance and the State Administration of Taxation jointly issued a notice a few days ago saying that in order to further support inclusive financial services for small and micro enterprises, individual industrial and commercial households, and farmers, the implementation period of preferential tax policies related to inclusive finance will be extended to December 31, 2023.

Nickel spot: last week, the spot market price of nickel was quoted between 97200 and 102350 yuan / ton. From last Monday, most traders have changed from Shanghai Nickel 05 contract to 06 contract quotation. Due to the strong nickel price at the beginning of the week, Russian nickel was overquoted between 150 yuan and 100 yuan / ton, while the mid-week market price fell below 100, 000 yuan one after another. the Russian nickel to Shanghai nickel 2006 contract is overstated in sticking 50 to flat water, and although the price returns to 100, 000 on Friday, Russia nickel still does not have the big drop. In the transaction of Russian nickel, the downstream demand changed from strong to weak at the beginning of the week, the supply of low-cost goods on the market gradually decreased, and the willingness of traders to replenish the warehouse weakened. Jinchuan nickel last week, most of the rising water above 1000 yuan / ton, and last Tuesday factory prices lower than the market, traders enthusiastically pick up the goods. On the other hand, with the nickel price plunging, it has also stimulated the replenishment demand of Jinchuan nickel end users. Jinchuan nickel inquiry is active in the middle of the week, and the trading volume is stronger than that of Russian nickel. But since Thursday, manufacturers in the Shanghai area did not arrive, so that Jinchuan supply circulation is tight, so the rising water held stable, transactions weakened. Russia is expected to import nickel into the market this week, the discount is expected to expand. Jinchuan nickel water due to less shipments, or will maintain between 1000-1500 yuan / ton.

Nickel mine: according to last week's research, it is clear that South Suligao can start loading on May 8, the North Suligao policy has not changed, ships can be allowed to enter the port after the end of the ban. However, the specific implementation of each mine is not clear for the time being, and North Suligao is expected to resume in mid-May. Suriname is the main mining area in the Philippines, accounting for more than 70% of the annual shipments of the Philippines. It is expected that in early May, the nickel mining market may follow the Philippine gradually lift the ban active, mining prices may have the possibility of slightly higher.

On April 24, the total amount of nickel stocks in Shanghai, including the previous warehouse receipt inventory, was reduced by 403 tons to 55000 tons, or 0.73 per cent, compared with the previous week. Domestic stocks (except bonded warehouses) are about 37100 tons, including about 2300 tons of nickel beans and 34800 tons of nickel plates. In the previous period, inventories fell by 505 tons, or 1.81%, and warehouse receipts were reduced by warehouses in Shanghai. The hidden inventory in East China increased by 102 tons compared with last week, mainly because the stock of imported nickel beans increased to 2300 tons after the original factory was imported into the warehouse, although the imported nickel plate was put into the warehouse, the overall income was not enough to make ends meet, and the domestic nickel plate continued to be in the state of falling into the warehouse. Shanghai Free Trade Zone refined nickel inventory of 17900 tons, compared with last week, it is reported that nearly 1,000 tons of nickel plate and nickel beans to Hong Kong, but is currently in the customs import process, will not flow into the bonded area warehouse, is expected to enter East China hidden warehouse and medium storage and delivery warehouse this week.

Nickel price judgment: in addition to crude oil, the macro performance is relatively stable, the performance of nickel fundamentals is fair, but also can not be too optimistic, although there are nickel mine imports blocked, overseas first-class nickel enterprises to reduce production and other good news, however, Indonesia's large invasion of nickel pig iron so that the balance between supply and demand is still difficult to improve, the stainless steel market is still worried, but even if the decline space is also limited, long and empty intertwined, In the short term, the nickel market is still more suitable for short-term operation. It is expected that Shanghai Nickel 96500-102500 yuan / ton and Lunni 11800-12500 US dollars / ton this week.