CST
translation
Source:SMM
SMM4, March 1: March 27, rumors emerged that China will further cut taxes and fees to deal with the damage to the domestic economy caused by the new crown epidemic and ease the pressure on enterprises. From January to February this year, tax cuts totaled 402.7 billion yuan, according to the State Administration of Taxation. After the news, March 27 non-ferrous metals are out of the rally, in which zinc prices are particularly strong, the day up 525 yuan / ton, up 3.53%. SMM believes that after the implementation of the government's specific policy of reducing taxes and fees, zinc prices will return to the contango structure.

Zinc mining: in April, the overseas epidemic has not yet seen a full inflection point, and the ban on mines in Peru has also been extended to May 10. In the future, we need to pay attention to whether the third wave of outbreaks will have a bigger impact. Through the collation of the entire overseas market, it is calculated that the reduction of overseas minerals is 339300 tons, of which Peru has brought the reduction of 180700 tons. Compared with the increase of 600000 tons of mines in 2020, the actual increase in overseas minerals this year is expected to be about 270000 tons.

In China, due to the seasonal shutdown of the superimposed epidemic situation, the resumption of production has been delayed, and the domestic mine operation rate is at a historical low in the same period. In April, mines in high altitude areas such as Xinjiang, Tibet and Inner Mongolia will enter the stage of resumption of production, and the zinc mine production rate is expected to increase steadily in the second quarter of 2020. China's zinc mine output in the first half of 2020 is expected to be about 150000 tons lower than that of the same period last year. However, as the price of zinc fell below ten thousand six, the profit of the mine was greatly compressed or even lost, and some mines delayed shipment to do finished product inventory, and at the same time reduced the processing fee. On the other hand, as far as imported mines are concerned, according to SMM research, overseas shipping to China has not stopped, and there is no break in the continuous replenishment of zinc ore imports, but the shipping time has increased by half to a month than normal, and zinc ore imports from May to June are expected to be lower than in April. 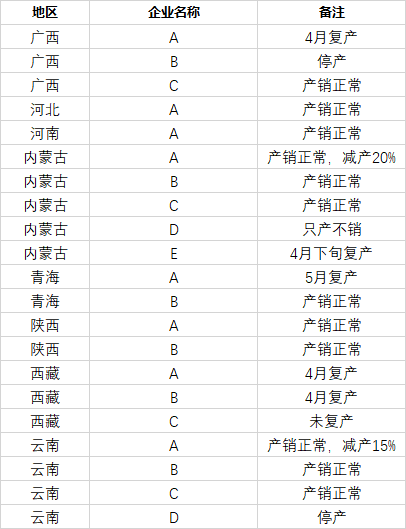 At smelters, as of early April, raw material stocks at smelters had fallen to a 15-year low, and some companies had advanced their maintenance plans for July and August to the second quarter because of tight inventories of raw materials. According to SMM statistics, from April to May, although refineries have entered overhaul one after another, with the resumption of production at the end of the previous smelter overhaul and the increase in production of some smelters, the operating rate in May is expected to be only slightly lower than in April.

From the Lianyungang inventory, as of April 24, Lianyungang inventory rose to 230000 tons, at a 17-year high, according to SMM, most of the port mine rights have basically belonged to the smelter. With the replenishment of imported mines, the raw material inventory of the smelter may be maintained, and the short-term pressure will be alleviated. However, from late May to June, affected by the overseas epidemic, zinc mine imports are expected to weaken sharply, smelter raw material inventory pressure may be further fermented, and smelter production is expected to weaken month-on-month in June.