From January to March, customs scrap copper import detailed data have been released, SMM carding found that whether it is the amount of real objects, metal, or year-on-year, month-on-month have been significantly reduced. As shown in the following figure: 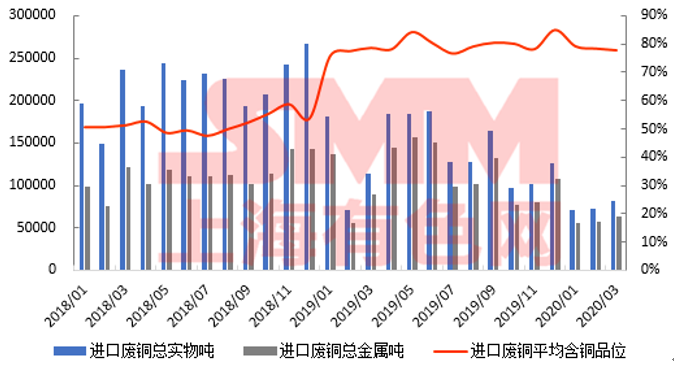 In this regard, we believe that the main points are:

Two. The issuance of approval documents is relatively late. This year, the first batch of approval documents will be issued on December 23, 2019, while domestic enterprises will have a holiday in late January 2020, and there will be delays in finding sources of goods, import customs declaration, logistics, and so on.

Three. Suddenly, the epidemic caught the market off guard. In addition to the sharp fall in copper prices, which aggravated the selling sentiment of businesses in Southeast Asia, Europe and the United States, in February, as a result of the epidemic, domestic ports were congested and worried about risks. Cargo ships also stopped sending to China, and the reduction in upstream supply was an important factor.

Imported waste copper accounts for about 61.39% of the total domestic copper waste, while Malaysia accounts for 16.54% of imported copper, which is the largest source of waste copper import in China. According to the import enterprises that built the factory in Malaysia, as the export of scrap copper in Malaysia began to be blocked in late March, the stock of scrap copper products stranded in Malaysia was relatively high, and the pressure of capital backlog was great. After the recent recovery of copper prices, they are speeding up shipments to China. However, due to port logistics and other problems, the goods will not arrive until mid-May, and there is a slight feeling that far water will not be able to put out the near fire. Similarly, port exports in Europe and the United States and other regions also have a shortage of boxes, port treatment efficiency and other problems, it is expected that domestic copper imports in April-May will not be optimistic. In addition, due to the above problems, the import of copper ingots is also difficult.

At the pace at which the first batch of approvals issued in each quarter subsequently shrank sharply, policy makers intended to control scrap imports to avoid excess approvals after the formal implementation of the renewable copper resources policy in July. SMM learned that the first quarter approval documents in the hands of import enterprises have basically run out, the first two batches issued in the second quarter totaled 224200 tons, although less than half of the import volume in the second quarter of last year, but the impact of the overseas epidemic and the time is still early, most of the newly approved approval documents have not yet been used, which appears that the current approval volume is still relatively loose, and even there are concerns that the approval documents will not be used up.

Overall, domestic copper imports fell by nearly 150000 metal tons in the first quarter compared with the same period last year. In addition, domestic scrap copper supply also contracted seriously after the fall in copper prices, and the total reduction in scrap copper supply is expected to be around 200000 tons in the first quarter. Neither imported scrap copper nor domestic scrap copper supply shows signs of improvement in the short term. Waste copper consumption does not have advantages after the shortage of waste copper raw material supply and the narrowing of fine scrap price difference, which urges enterprises to turn to electrolytic copper consumption, especially in the copper rod industry, which leads to the accelerated recovery of domestic demand. continue to perform faster to go to the warehouse.

SMM Research on Operating Rate of Copper-end Enterprises
As per SMM research data, operating rate of cable enterprises is 86.97%, dropping 1.16% on yearly basis, up 0.28% on monthly basis.