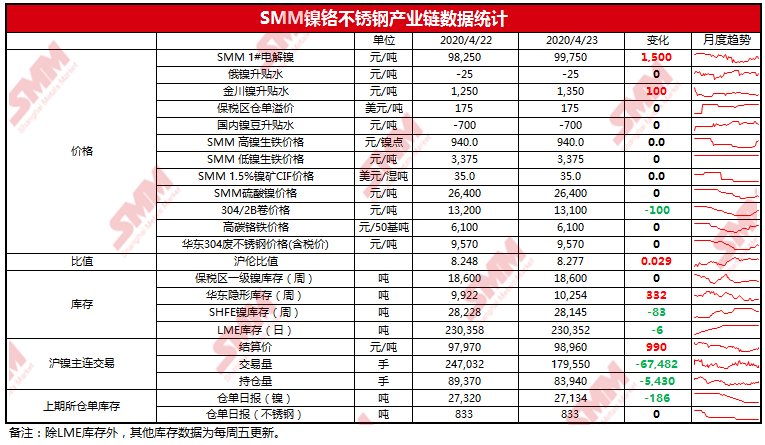 On the macro front, US initial claims for unemployment benefits reached 4.43 million last week, rising to 26.5 million in five weeks, confirming that all the jobs added during the longest jobs boom in US history have been wiped out by the new crown epidemic, which has hit the economy hard. Americans are at their highest level of pessimism about the economic outlook in 11 years, and sales of new homes fell by the most since 2013 in March. The IHS Markit's composite purchasing managers' index for the US, UK and eurozone all fell to record lows in April, indicating a record contraction in business activity; the failure of the EU summit to agree on an economic stimulus package; German Chancellor Angela Merkel said the scale of the anti-epidemic measures must be large; and ECB President Christine Lagarde is said to have warned of an outbreak that could lead to a 15 per cent drop in GDP in the region. [bearish]

As for nickel pig iron, the price of SMM high nickel pig iron on April 23 was 930,950 yuan / nickel point (including ex-factory tax), which was the same as that of the previous trading day. Yesterday, there was no mainstream steel factory inquiry, iron factory quotation remained high; high nickel pig iron than pure nickel discount rebounded slightly compared with yesterday, nickel and iron prices still have a small amount of room. [Lido]