SMM4 23: the morning non-ferrous metals market rose collectively, Shanghai tin rose 3.6%, Shanghai lead rose 2% Shanghai copper rose 1.98%. Chilean miner Antofagasta said it had cut its capital expenditure plan for 2020 and lowered its copper output target as a result of the new crown pneumonia outbreak, according to copper supply side news. The company produced 194000 tonnes of copper in the first quarter, up 4.6 per cent from the previous quarter, while its production costs fell. The company said it expected copper production to be at the low end of its forecast range of 72.5-755000 tonnes this year. On the aluminum side, on April 23, more places entered the warehouse and stacked it out of the warehouse. SMM statistics showed that the social inventory of electrolytic aluminum in China was down 136000 tons to 1.359 million tons compared with the previous Thursday. "see the details of nickel due to the contraction of the supply side, the Philippine nickel mine export areas will at least continue to close, the supply side is good to continue to stimulate nickel prices, the short-term future may still have upward momentum.

The black system also rose across the board, with iron ore up 1.8% and steel up 0.8%. Recently, the China Steel Association said that this year's steel demand is mainly affected by direct and indirect exports. In terms of direct exports, last year, China's steel exports were 64.29 million tons, and this year is expected to decline significantly. In terms of indirect exports, it is estimated that exports from five major industries, such as automobiles, household appliances, shipbuilding, containers and machinery, indirectly drive steel consumption of about 79 million tons. Coupled with the export of other products, the annual indirect export volume of steel ranges from 80 million tons to 90 million tons. If both direct and indirect steel exports fall by 1 / 4, steel demand will fall by 3.8 per cent this year. "View details

Crude oil rose 5.09% in the previous period. International oil prices continue to rise amid signs that oil-producing countries are cutting production in response to falling demand. Brent crude oil futures rose 57 cents, or 2.8 percent, to $20.94 a barrel, up more than 5 percent on Wednesday. The energy regulator in Oklahoma, the fourth-largest oil producer in the US, said companies could shut down wells without losing their leases, a preliminary victory for struggling US oil producers to seek relief from the market rout. As a result of the sharp drop in demand, the Organization of Petroleum Exporting countries (OPEC) (OPEC), Russia and some other countries, namely OPEC+, will reduce production by 9.7 million barrels per day from May 1. 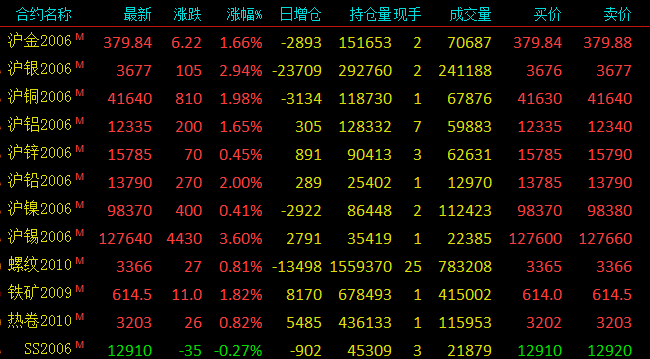 Aluminum: aluminum interval vibration in the early afternoon. In the morning, the price quoted by the holder of Wuxi area in Shanghai is between 12470-12480 yuan / ton, the spot price is more than 200 yuan / ton compared with yesterday, the rising water is concentrated in the range of 40-50 yuan / ton, and the price in Hangzhou area is concentrated in 12480-12500 yuan / ton today. In the morning, a large household actively carried out procurement plans in Shanghai and tin, traders traded actively, transactions were better, aluminum prices fell back after 10: 30, and most of the holders began to quote on the disk, the rising water remained unchanged, the price concentrated between 12440-12460 yuan / ton, due to the end of procurement, some traders turned to wait-and-see attitude, trading began to hesitate, the heat of transactions fell back significantly earlier. Downstream today, mainly on-demand procurement, due to the sharp rise in aluminum prices, the enthusiasm for buying goods has been restrained to a certain extent. The overall transaction in East China is better today.

The mainstream transaction of Guangdong zinc was 15810-15940 yuan / ton, and the quotation focused on 5080 yuan / ton of Shanghai zinc 2006 contract. The discount of 150 yuan / ton in Guangdong stock market was 40 yuan less than that of the previous trading day. During the first trading period, recently, Guangdong warehouse zinc ingots were sent to Shanghai one after another, and the tradable inventory in the market was lower than that in the early stage. When the demand for monthly ticket resources increased, Kirin, Mengzi, Huize and Tiefeng quoted prices for the Shanghai zinc June contract by 70-80 / ton. In the second trading period, the spot rising water goes higher, the holder receives the goods source profit in the early stage is better, the active shipment, presses the market transaction price, in addition to the downstream replenishment demand is general, the later rising water weakens. Kirin, Mengzi, Huize and Tiefeng quoted 50-65 yuan / ton for the June contract. Kylin, Mengzi, Huize, Tiefeng mainstream transaction in 15810-15940 yuan / ton.