CST
translation
Source:SMM
Today's oil market black swan makes it difficult for the commodity market to be alone, a variety of futures closed down. Non-ferrous metals Shanghai zinc fell 2.86%, SMM believes that the short-term zinc price above the 60-day line resistance, Wanliu above the mines and smelters have to keep the value of the market, to suppress the price of zinc ingots.

SMM4 21: today's oil market black swan so that the commodity market is difficult to escape, a variety of futures closed down. Non-ferrous metals Shanghai zinc fell 2.86%, SMM believes that the short-term zinc price above the 60-day line resistance, Wanliu above the mines and smelters have to keep the value of the market, to suppress the price of zinc ingots. However, recent consumption is still at a high level, zinc prices fell, downstream procurement efforts have been strengthened, is expected to go to the warehouse this week is better, for zinc prices to support. As far as the consumer side is concerned, the galvanized plate supports zinc consumption. The state plans to issue 1 trillion special local government debt in advance, which will help boost market sentiment, but we still need to pay attention to the essence of terminal infrastructure for zinc consumption. Copper futures have fallen or as Glencore plans to restart production at the Mopani copper mine in Zambia, easing fears of production disruptions at the mine and a rebound in copper supplies. Shanghai nickel rush fell back, fundamentals supply and demand short-term situation is OK, production expectations have been lowered to further stimulate market sentiment.

Black iron ore fell 2.82%, thread heat rolled down more than 1%. Steel inventory maintenance performance proves that demand is good during the peak season, even if high production is still achieved quickly to go to the warehouse. Iron ore is dragged down by the drop in crude oil, but supplies are falling. SMM tracking data show that although the current Aoba iron ore shipments continue to maintain the increment. The arrival volume of the new phase is 1.82 million tons lower than that of the previous period, and 1.22 million tons lower than that of the same period last year, and there will be upward support in the short term.

Crude oil fell 4.78% in the previous period. As for the negative value of US oil, industry agencies believe that there may be similar fluctuations in the crude oil market on April 21, the last trading day of the May contract. After that, the reality in the physical market is that there is still a severe oversupply in the oil market, which could put downward pressure on WTI contracts in June. However, due to the limited space left for final oil storage, output must be substantially reduced to rebalance the market, and once demand gradually picks up, it will lay the foundation for an eventual rise in oil prices. 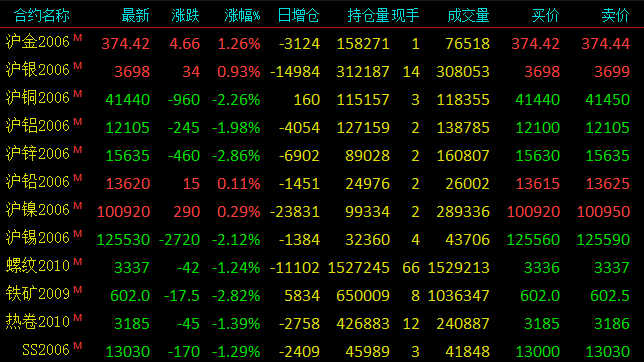 In terms of capital flows, more than 4.2 billion of the money flowed out of the commodity market today. The chemical plate lost 1.661 billion yuan, the non-ferrous plate was abandoned by 854 million funds, and the crude oil plate lost 693 million yuan in blood. According to the variety, crude oil, Shanghai nickel losses are the heaviest, both outflow of more than 500 million funds. In the aspect of stock index futures, the three varieties are favored again, and the performance of IF and IC is particularly prominent.

Copper: today, the Shanghai copper main contract short opened at 41860 yuan / ton, the disk center of gravity briefly hovered in the 42020 yuan / ton position. Subsequently, the long and short sides jointly cracked down on copper prices, and the disk fell sharply to a daily low of 41410 yuan / ton. Copper prices rebounded from the low, but the rising momentum is limited, and then fell more than 200 yuan / ton around 41590 yuan / ton position horizontal volatility, closed at 41540 yuan / ton at noon. After a slight fall in copper prices at the start of the afternoon, the price of copper rose slightly to 41690 yuan / tonne, and fell again to close at 41440 yuan / tonne, down 960 yuan / tonne, or 2.26 per cent. Today, the main force of copper in Shanghai increased its position by 160 hands to 115000 hands, mainly by short positions, while trading volume increased by 41000 hands to 118000 hands. The Shanghai copper index increased its position by 4471 hands to 326000, mainly by short positions. Shanghai Copper 07, 08 contract day respectively increased positions by 4262 hands and 1206 hands, 06, 07 and 08 contract price spread narrowed. Within the day, the main contract of Shanghai copper jumped short and opened lower, mainly dragged down by the international price of crude oil. Today is the last trading day of the May WTI crude oil futures contract, contract holders sold sharply, but the oil storage space is limited, the market lack of oil storage capacity participants, the May contract prices plummeted, also had a negative impact on the June crude oil contract prices. Copper prices have been dragged down by investor sentiment. In addition, the National Bureau of Statistics announced that China's refined copper production in March, down 2.5 percentage points from the same period last year, indicating that China's copper smelting and production activities have indeed been affected by the epidemic. Concerns about tight copper supply have not eased, partly supporting copper prices. Shanghai copper closed down today, has given up the previous two trading days of gains, the top pressure 40-day moving average. At present, the 5-day, 10-day moving average and 40-day moving average show an adhesive trend, and the copper price is under pressure above the price. In the evening, we will further test whether copper prices can stand firm in the 10-day moving average.

Lead: within the day, the Shanghai lead main force 2006 contract opened at 13605 yuan / ton, long and short differences between the two sides, resulting in Shanghai lead wide concussion throughout the day, the upper pressure 13685 yuan / ton platform, the bottom of the 13525 yuan / ton first-line support, finally closed at 13620 yuan / ton, up 15 yuan / ton, up 0.11%, position reduced 1451 hands to 24976 hands. Shanghai lead closed at the Xiaoyang line, the 5, 10-day moving average formed a dead fork, but the lower 13500 yuan / ton platform support still exists, the spot market is in a weak situation of supply and demand, pay attention to this week's lead ingot social inventory changes, or will guide the trend of lead prices.

Nickel: Shanghai Nickel 2006 contract opened at 102030 yuan / ton today, briefly probed 102500 yuan / ton after the opening, but as overnight US crude oil fell to a negative value, the market risk aversion heated up, the bulls left the market one after another, so that the nickel price retreated to 100000 above the 60-day moving average near the adjustment, the lowest bottom to 100160 yuan / ton, and then continue to run below the daily moving average. Although the morning market nickel price several times to the 100000 gate down, but all within the day the new empty warehouse to suspend the offensive. In the afternoon, as the price of crude oil stopped falling and the market panic eased, Shanghai nickel gradually stabilized and rebounded to above the daily average of 101000 yuan / ton, until the close, the long and short sides closed their positions, Shanghai nickel closed at 100920 yuan / ton, settlement price rose 290 yuan / ton, up 0.29%. The trading volume was reduced by 43989 hands to 289000 hands, and the position was reduced by 23831 hands to 99334 hands. As a result of yesterday's sharp rise in nickel prices, although retreated to the 100000 level today, but still above the 60-day moving average, waiting to pay attention to the outer disk guide in the evening to test whether the domestic long energy still exists.