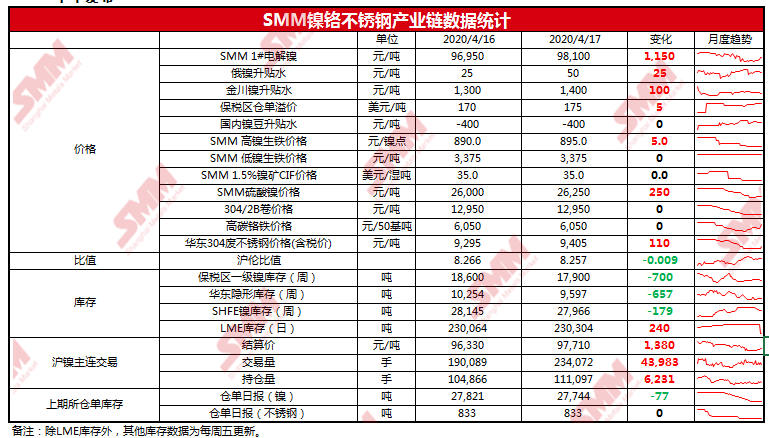 At the macro level, it is reported that the World large Enterprise Research Association said that a measure of future economic activity in the United States fell a record in March-the leading economic indicator, (LEI), fell 6.7 per cent last month, the biggest drop in the index's 60-year history, suggesting that the US economy may struggle to emerge from the deep recession triggered by the new crown virus epidemic. The February data were revised downwards to show that the index was down 0.2%, rather than the 0.1% rise previously reported. The (UNECA) says a pandemic of new crown pneumonia could kill at least 300000 Africans and plunge 29 million into extreme poverty. The 17th meeting of the standing Committee of the 13th National people's Congress will be held in Beijing from April 26 to 29. According to data released by China's National Bureau of Statistics, China's GDP fell 6.8 percent in the first quarter compared with the same period last year. In the first quarter, the investment in real estate development in China decreased by 7.7% year on year, 8.6% less than that from January to February, the sales area of commercial housing decreased by 26.3%, the sales of commercial housing decreased by 24.7%, and the funds of real estate development enterprises decreased by 13.8%. In March, the prosperity index of real estate development was 98.18, an increase of 0.78 points compared with the previous month. The surplus of China's bank settlement and sale of foreign exchange in March was 18.6 billion US dollars, more than 30 percent of that of the previous month, and the largest in nearly two years. Safe officials and analysts believe that although the epidemic of Xinguan pneumonia has had a serious impact on the international financial market, the cross-border investment and financing activities and settlement and sale of foreign exchange by market participants have basically maintained a rational and orderly order. China's cross-border capital flows are generally stable, and the supply and demand of the foreign exchange market is basically balanced. The narrow passenger car retail market in the first quarter of 2020 was 3.01 million, down 41 per cent from a year earlier, a record low in recent years, and sales of narrow passenger cars are expected to be 1.39 million in April, down about 8 per cent from a year earlier, according to the Association. [bearish]

Nickel spot: last week, the spot price of electrolytic nickel was stable in the range of 96000-99000 yuan / ton, while the rising water of Russian nickel did not change much. It was overstated that the Shanghai Nickel 2005 contract was flat-up by 100 yuan / tonne. Near the weekend, the holder moved to 06 contract quotation one after another. Although the center of gravity of nickel prices has moved up from last week, end users still pick up the goods on demand, and the transaction situation has not changed much from the previous week. Jinchuan nickel, with the arrival of Jinchuan Company in Shanghai at the beginning of the week, and the appropriate reduction in ex-factory prices to stimulate traders to receive shipments, weekly shipments of about 1000 tons, and Jinchuan nickel market also gradually rose by 1500 yuan / ton to 2005 contracts rose 1200 yuan / ton, but most of the transactions during the week to traders circulation replenishment, downstream demand is still weak. As the end of the month is approaching, Jinchuan Company is expected to reduce shipments this week, Jinchuan nickel rising water may remain in the 06 contract rose between 1200-1500 yuan / ton. On the other hand, as for Russian nickel, due to the recent absence of imports, the rate of discount to the 06 contract may be narrowed. [neutral]

Stainless steel: last week, stimulated by the continuous rise in stainless steel futures contracts and the increase in the price of stainless steel plants, the spot price of stainless steel has also been raised continuously. 304cold rolling increased by 500yuan / ton, the average price was quoted at 12950 yuan / ton, 304hot rolling increased by 600yuan / ton, quoted at 12500 yuan / ton. According to the market, during the price increase at the beginning of the week, the transaction situation was good. On the one hand, due to the small supply of some specifications, it promoted the mood of traders to pick up the goods; on the other hand, due to the proximity of the May Day holiday, some businesses replenished and purchased actively. Some traders said that now the order in April has basically been completed and the receipt of orders in May has begun. However, on Thursday and Friday, after the gradual completion of replenishment downstream, and after the upward trend returned to calm, transactions shrunk slightly, and some businesses trimmed prices slightly on Friday to promote shipment.

Stainless steel stocks: in mid-April, total stainless steel stocks fell 150400 tons, or 13.4 per cent, to 972700 tons from the end of March. Among them, 200 series decreased by about 46900 tons, 300 series by 97300 tons, and 400 series inventory by 6200 tons. Some steel mills reduced production in March, or there were orders in transit, did not come to the market, the market spot resources are limited, however, because the previous price decline is too large, part of the agent or trader inventory is not much, and after the price rise, for the delivery of the previous price when the empty order to replenish, trading volume increased, so the market inventory has a certain decline compared with the end of March.