SMM4 17, after more than half a month of copper prices rebounded, and coincided with the weak adjustment of copper prices in the middle of the week, scrap copper companies took the opportunity to close the low hoarding of scrap copper inventory, and the waste copper hoarded before the Spring Festival to maintain a loss state, or failed to fully release, but the recent scrap copper trade is also rare to usher in the Spring Festival 2 months after the more active transactions. The overseas epidemic is not yet in the final stage, most traders are worried about high risk dare not hoard goods at will, in the pursuit of fast-forward and fast-out in the scrap copper market, the domestic upstream supply side should not re-appear in February-March serious hoarding.

However, according to SMM research, Southeast Asia, Europe and the United States, the impact of scrap copper enterprises shutdown, export interruption, more than half a month later, finally transmitted to China, domestic scrap copper traders, miscellaneous copper processing enterprises have reflected that the supply of imported copper began to feel tight, and the early closed countries generally have to extend the isolation measures again, Malaysia and other regions of the dismantling enterprises still have some time to go. In addition, the scrap copper raw materials of dismantling enterprises are also very scarce. After resuming work, it is difficult to cook a meal without rice for a period of time. According to the scrap copper import shipping date, overseas supply system recovery difficulty, senior industry insiders believe that in the next one and a half months, the import supply shortage will continue to intensify. Imported scrap copper accounts for about 60% of the total supply of scrap copper in China, so even if the domestic scrap copper supply has improved, it can not ease the fear of further shortage of follow-up supply. 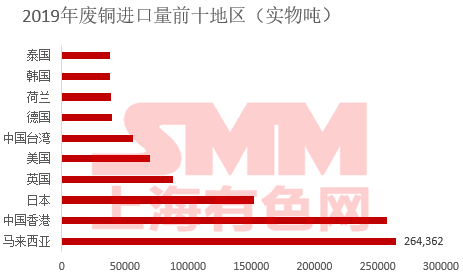 In addition, the fine waste price difference increases with the copper price. SMM data show that the tax price difference between bright copper and electrolytic copper at the processing end is 256 yuan / ton. The scrap copper rod enterprise, which has stopped production, brings hope to restart. At the same time, downstream manufacturers actively enter the market to receive goods to supplement nearly dry inventory, want to purchase success requires a higher bid, it can be seen that the strong demand for scrap copper in the market is also a factor leading to the shortage of supply and demand.