CST
translation
Source:SMM
Today, the non-ferrous metals market ushered in a general rise in the market, a variety of increases expanded. Although GDP fell in the first quarter, the market is generally expected to have more positive policies to hedge downside risks in the second quarter.

SMM4 month 17: today's non-ferrous metals market ushered in a general rise in the market, a variety of increases expanded. Although GDP fell in the first quarter, the market is generally expected to have more positive policies to hedge downside risks in the second quarter. On the copper side, it is understood that there are rumors that Yunnan Copper will cut production and that copper stocks in the Shanghai bonded area on Friday (April 17) are 11300 tons to 316000 tons lower than last week (April 10). Inventory removal supports the rise in copper prices. On the zinc side, according to SMM, as of Friday (April 17), the total inventory of zinc ingots in SMM Seven places was 272200 tons, down 13600 tons from last Friday (April 10) and 11400 tons from Monday (April 13). "from the point of view of the details this week, the storage reduction is mainly concentrated in Shanghai and Guangdong, and the Shanghai area has a strong willingness to buy downstream this week, mainly concentrated in the galvanized pipe and other galvanized structural parts industry, driving the storage volume higher. From the fundamental point of view, on the supply side, at present, the inventory level of the smelter is low, and the tight raw materials are still the main problem for the refinery, but at present, the profit of the processing fee can alleviate the raw material problem, and the imported ore can still flow in continuously, and the possibility of a large area reduction and shutdown of the smelter in the future is not great.

The black series shock fell, with iron ore up 1.32% and threads up 0.03% and hot rolls up 0.62%. Tangshan environmental protection production limit news once again triggered hot discussion, market rumors rated as Class C blast furnace production limit ratio of 30%-50%. However, according to the SMM tracking survey, as of April 17, only a small number of steel mills had received oral notice and stopped production of some small blast furnaces, which mainly had a great impact on the strip steel, and the impact on the hot coil output was extremely limited. Rio Tinto said iron ore shipments in Australia's Pilbara region rose 5.5 per cent to 72.9 million tonnes in the first quarter from a year earlier, more than offsetting production losses caused by tropical cyclones at the start of the quarter. Pilbara iron ore production in the first quarter was 77.8 million tonnes, up 2 per cent from a year earlier and above analysts' average forecast of 71.9 million tonnes, while Rio maintained its previous guidance of 324 million-334 million tonnes of iron ore shipments.

Crude oil fell 4.91% in the previous period. Crude oil futures opened higher and lower today, with the main 06 contract falling more than 8 per cent to a one-month low of 242.1 yuan a barrel. However, linoleum oil has generally risen because US President Donald Trump has proposed guidelines in which state governors can gradually lift anti-epidemic closures and restart the economy in three stages. Although the OPEC+ has reached an agreement, there is still no incentive for a sharp rise in oil prices in the short term. "View details 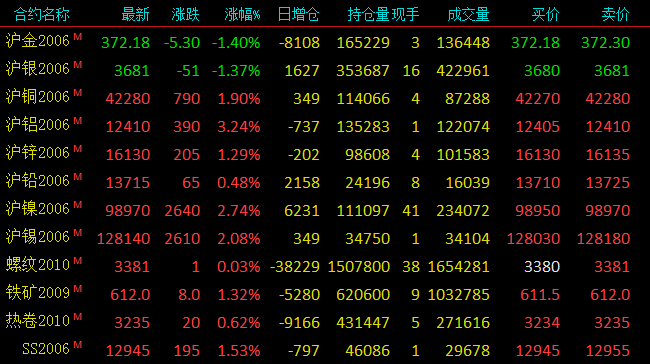 Lead: within the day, the Shanghai lead main force 2006 contract opened at 13800 yuan / ton, the whole day basically around the daily average shock, near the close, the consumer end of the downturn, superimposed recycled lead discount quotation increased, short funds entered to suppress, Shanghai lead center of gravity slowly moved down, finally closed at 13715 yuan / ton, up 65 yuan / ton, up 0.48%, position increased by 2158 hands to 24196 hands. Shanghai lead closed small negative line, to 5, 10 moving averages formed by the formation of the platform as the support shock, the weekend to pay close attention to the changes in macro news.

Zinc: the main Shanghai zinc contract opened at 16075 yuan / ton. At the beginning of the day, Shanghai zinc increased its position and rose again. After touching 16195 yuan / ton, a large number of stop earnings emerged again. Shanghai zinc recorded an inverted V fell back to 16100 yuan / ton about narrow range finishing, closed up 16130 yuan / ton, up 160 yuan / ton, up 1%, trading volume increased 4069 hands to 102000 hands, position decreased to 98608 hands. The center of gravity of Shanghai zinc operation has moved up further, and the driving force of buying funds has slowed down, but it is undeniable that there is still room for fermentation at the end of the mine, and it can still be optimistic about zinc in the future.