SMM4, March 17: the National Bureau of Statistics released economic data for the first quarter, of which GDP fell 6.8 percent in the first quarter compared with the same period last year. But China will also launch a stronger hedging policy as the situation changes, and the economy is expected to continue to pick up, improve and improve in March. "[concern] the improvement momentum of China's economic data from January to March will continue in March. Overseas mines should reduce production and overhaul in advance by domestic smelters, the supply side will be disturbed greatly, and the consumer side will be affected by the rush after the resumption of terminal infrastructure projects. At present, the consumption ring in the galvanizing industry is better. In a comprehensive view, zinc ingots continue to go to the warehouse in the near future, driving prices up. Overseas supply problems look at the inflection point of the epidemic, as long as the inflection point appears, the mining end will quickly recover, the overall supply and demand of zinc remains surplus, the rebound high level can be appropriately short. Copper, there are rumors that cloud copper will reduce production, the current spot market initiative in the hands of large receivers, the proportion of imported copper is small, the actual demand is limited.

Crude oil fell 6.67% in the previous period. At one point, the intraday limit hit the limit, storage space around the world is rapidly filling up, and in some areas where crude oil is difficult to transport, producers may soon be forced to post money to buyers to transport the crude oil away, which is in effect pushing oil prices down to negative levels. The collapse in oil prices is upending the energy industry and even the algorithms used in energy derivatives exchanges. (CME) now says it is reprogramming the software to deal with negative prices for energy-related financial instruments. Part of the problem is the limited ability of the energy industry to store excess oil. The rapid accumulation of crude oil stocks comes at a time when refineries are sharply reducing the volume of crude oil processing. 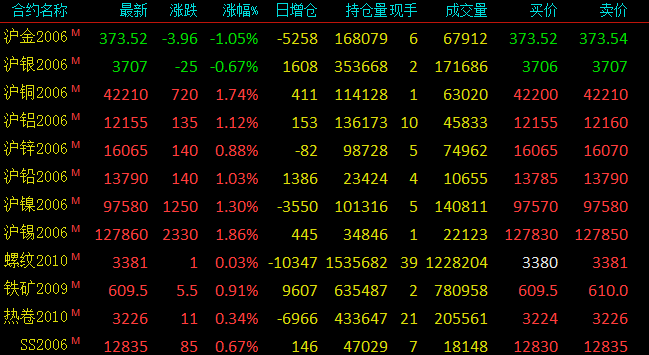 Zinc: Guangdong zinc mainstream transaction at 16060-16170 yuan / ton, the quotation focuses on the Shanghai zinc 2006 contract discount 10 to 10 yuan / ton, Guangdong market compared with Shanghai stock market discount 130 yuan / ton narrower than the previous trading day 10 yuan. The first trading period, today's price increases, the market wait-and-see mood is strong, individual cardholders quoted lower in the early stage, the source of low prices was soon wiped out, the market began to offer goods, Kirin, Mengzi, Huize, Tiefeng quoted price of Shanghai zinc June contract discount 10-30 yuan / ton. In the second trading period, the circulation of goods in the market has increased, but the holders have offered more goods at a higher price, and a small number of sources have been quoted at a lower price, while the downstream has just needed to purchase, and the market has been trading in general. Kirin, Mengzi, Huize, Tiefeng quoted for June contract discount 10 to 10 yuan / ton. Kylin, Mengzi, Huize, Tiefeng mainstream transaction in 16060-16170 yuan / ton.