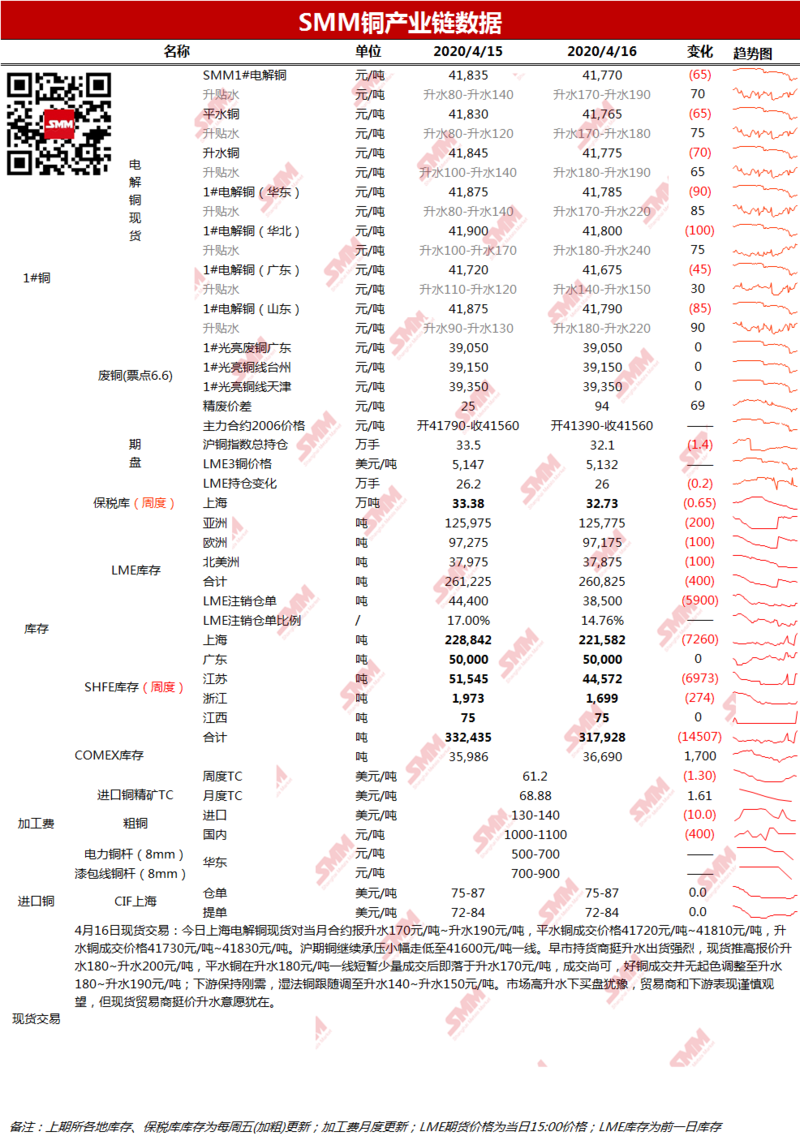 1) Trump issued guidance on the gradual lifting of restrictions on economic activity, in accordance with the guidelines, state governors can gradually lift the anti-epidemic closure measures in three phases and restart the economy. [Lido]

2) the number of initial claims for unemployment benefits in the United States for the week ended 11 April was 5.245 million, with an expected 5.5 million, compared with a previous value of 6.606 million. The number of people claiming unemployment benefits at the beginning of the past four weeks has accumulated about 22 million, basically wiping out all the new jobs since the financial crisis. It accounts for about 13.5% of the total labour force. [bearish]

Yesterday's import loss was around 100 yuan / ton. The overall market transaction is light, and the activity is limited by market demand. As a result of many days of transactions did not improve, yesterday, the market sentiment eased, the willingness of shippers to improve, there are some traders slightly lower quotations. Bill of lading prices in recent months are still strong, the current market mainstream transactions recently arrived in Hong Kong wet bill of lading, most of the goods in late April have been out, good import prices have also led to the price of bills of lading in recent months to remain high. The buyer's demand for far-month bills of lading is lacklustre. [Lido]

East China: on the spot side, due to the small inventory pressure in the spot market, the holders still have a high price mood, but the disk rise suppresses the downstream buying sentiment. The overall transaction is relatively light, and the market quotation has been slightly lowered. It is expected to rise 150-170 yuan / ton today.

South China: Guangdong electrolytic copper spot contract rose 140% to 150% yesterday. In the spot market, trading improved significantly after the exchange month, subject to tight supply, and yesterday's rally continued to rise. It was quickly emptied, the price went up, and it was even harder to get it in the second quarter of the trading session. Overall, the supply of goods continues to be tight, businesses are bullish atmosphere, rising water rising boats, active market trading.

Copper price and forecast: last night, Lun copper closed at $5116.5 / ton, up 0.1%, trading volume 10000 hands, short positions reduced 1467 hands to 258000 hands. Us retail and manufacturing data for March, released yesterday, fell historically, with markets expecting a bigger collapse in April. In addition, IEA expects a record decline in global crude oil demand this year, superimposed on OPEC+ production cuts and production cuts that fall short of expectations, and the focus of the market has shifted back to concerns about the economic downturn and the slowdown in oil demand. Copper prices have fallen synchronously with the crude oil market in the past two days, but the decline is relatively small. Production cuts at the mining end and rapid domestic depot performance can still provide strong bottom support for copper prices. Today, the United States announced that it will gradually relax the control of the epidemic in the states, giving the market an optimistic signal, but the upward momentum is insufficient. It is expected that today's copper is US $5170-5250 / ton and Shanghai Copper 42000-42500 yuan / ton.