CST
translation
Source:SMM
SMM4, March 16: this paper mainly analyzes the UHV plate from the "new infrastructure" to the public view, in which the hot-dip galvanized power tower required for the line will contribute to zinc consumption in 2020 and the next three years.

Although the domestic epidemic has stabilized, but the economic shutdown for nearly two months and the external demand of the foreign epidemic on the domestic economy, it is still difficult for the domestic economy to recover in the early stage. However, the epidemic has not changed the goal of "steady growth." the "new infrastructure" put forward by the Politburo meeting of the CPC Central Committee has become a hot new investment sector, which mainly includes seven major areas, such as 5G infrastructure, UHV, intercity high-speed railway and intercity rail transit, new energy vehicle charging piles, big data centers, artificial intelligence, and industrial Internet. This paper mainly analyzes the UHV plate re-introduced from "new infrastructure" to the public field of vision, in which the hot-dip galvanized power tower required for the line will contribute to zinc consumption in 2020 and the next three years.

According to the Qinghai-Henan ±800 kV UHVDC transmission project built by the State Grid Corporation in 2019, and the Zhumadian-Wuhan ±1000kV UHV AC transmission and transformation project, SMM needs to build an average of 2 bases / km of new towers according to the total length of the line and the total number of new towers. Therefore, according to the total length of lines to be started in 2020, SMM expects to start new lines or jointly drive nearly 3900 ±1000kV UHV AC line towers and nearly 11000 ±800kV UHV DC line towers. 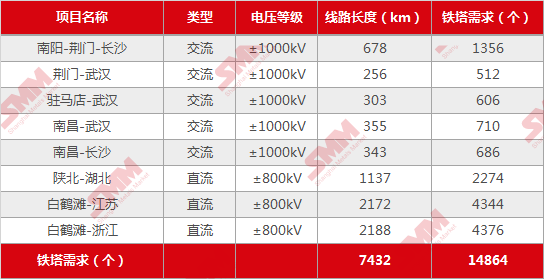 Overall, due to the impact of the epidemic, UHV projects promoted by the new infrastructure are expected to be released in the second half of 2020. According to SMM research, orders for galvanized tower enterprises in the first half of the year are concentrated in May-June, and most enterprises are more optimistic about orders in the second half of the year. On the whole, although other terminals are greatly affected by external demand, but the galvanized iron tower plate for the zinc consumer has a more significant improvement than last year.