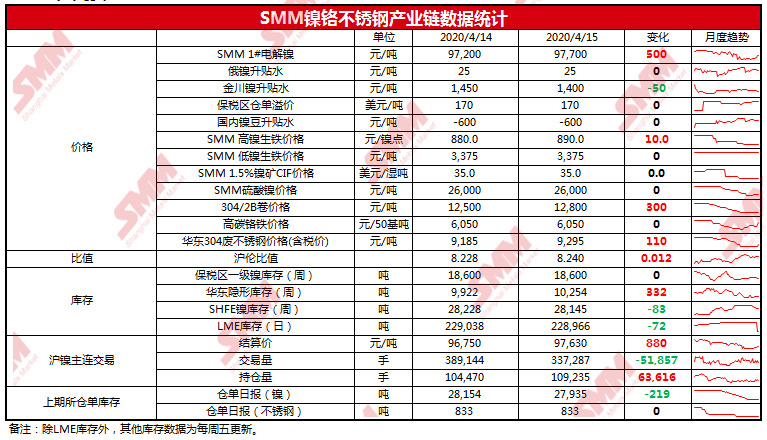 Macro: 1) US retail sales fell a record in March, falling $46.2 billion in March from a month earlier, down 8.7 per cent from the previous month, and US manufacturing output fell 6.3 per cent in March, the biggest drop since February 1946. [bearish] 2) the (IEA) of the International Energy Agency (IEA) publishes its monthly market report, saying global oil demand will plunge 9 per cent this year, the biggest drop on record. Demand is expected to fall by as much as 29 million barrels a day in April to its lowest level since 1995, and May consumption will fall by 26 million barrels a day; there is no viable agreement for production cuts to offset this short-term loss of demand. [bearish interest rate] 3) the central bank announced that it would facilitate MLF operations in the medium term in 100 billion and cut the winning interest rate by 20 basis points to 2.95%, up from 3.15%. The central bank had already taken the lead in cutting the reverse repurchase rate by 20 basis points on March 31. This round of central bank interest rate cuts usually start with a reduction in the open market reverse repurchase rate, followed by MLF, and then LPR;. On the 20th, the one-year interest rate of LPR will also be cut by 20 basis points along with MLF, while the five-year LPR, which is closely related to real estate, will also be reduced, but by a smaller margin.

Nickel spot: April 15 SMM1 electrolytic nickel quotation 9600-98600 / ton, the average price is 500 yuan / ton higher than the previous day. Russia Nickel to Shanghai Nickel 05 contract flat to 50 yuan / ton, Jinchuan Nickel to Shanghai Nickel 2005 contract in the rising water 1300-1500 yuan / ton. On the Russian nickel side, most of the traders continued the previous day's discount quotation, the transaction situation weakened, the center of gravity of nickel prices moved up in the second trading session, and a small number of traders lowered to discount quotations to promote transactions. Jinchuan nickel, as a result of the previous traders from manufacturers to replenish the warehouse, yesterday the market has been rising 1300 yuan / ton quotation, but most of the holders because of the previous cost, is still in the rise of 1400-1500 yuan / ton, the morning market downstream inquiry is weak, the transaction situation is not good. Jinchuan Company ex-factory price of 98600 yuan / ton, Shanghai area continues to have goods for sale, but due to the market has a large number of replenishment, the current delivery situation is less. In the afternoon, Jinchuan long Association received some goods, but the spot market transaction is still light. [neutral]

Stainless steel: on the morning of April 15, the price of 304 cold and hot rolling in Wuxi continued to rise, the average price of private cold rolling increased by 300 yuan / ton to 12700-12900 yuan / ton, and hot rolling increased by 300 yuan / ton to 12300-12500 yuan / ton. In the morning after the price adjustment, at noon, some traders adjusted prices again, up 100-200 yuan / ton. The spot price of stainless steel has also risen one after another, stimulated by the continuous rise in futures contract prices and the increase in the price of steel mills. Some businessmen said that at present, prices are rising rapidly, prices have been adjusted many times in a day, and some specifications also have a tight trend, and now prices have been raised continuously, the transaction situation has not been greatly affected, and the overall transaction is stable. Superimposed steel mills and businesses are the mentality of high prices, prices may still be strong in the short term. [Lido]

Nickel price judgment: in terms of fundamentals, the reduction in production of nickel mines in the Philippines is more clear on the reduction of supply, and the price of nickel pig iron has become stronger. However, SMM believes that the price of nickel pig iron and ferrochromium is strong, will aggravate the cost pressure of stainless steel plant in April, stainless steel due to inventory pressure price is difficult to improve, the cost end price rise will aggravate the loss, April and later period still do not rule out the possibility of stainless steel production contusion demand, so the technical rebound repair of nickel price, mainly depends on the macro repair and the high decline of the global epidemic. Lunni closed in the small negative column yesterday, for the first time since Lunni five even Yang, the shadow line to explore the $12000 / ton pass, the K column is located in the 5 / 40 day moving average range, Lunni opened at 11775 US dollars / ton today, follow up to pay attention to the concussion of the 5 / 40 day moving average range of Lunni.