SMM4 March 13: most of the non-ferrous market rose in the morning, near Shanghai nickel fell slightly. Although the global epidemic continues to rise, but the growth rate is more obvious than in the previous period. And the outer financial markets have opened the upward channel. According to statistics, the U. S. stock market rose 12% last week, the best performance of the week since 1974. Futures markets also generally stopped falling and rebounded. At present, however, although the resumption of work is gradually recovering, it is still not as expected. Overall, market demand has not fully recovered. Shanghai aluminum rose 0.42% after electrolytic aluminum supply in the first quarter will gradually ease the loose situation. As of April 13, out of the warehouse can still stack the arrival pressure to ease, SMM statistics of domestic electrolytic aluminum social inventory fell 59000 tons to 1.548 million tons compared with the previous Thursday. According to SMM statistics, national nickel pig iron production fell 4.46 per cent to 40200 nickel tons in March from a month earlier, down 12.25 per cent from a year earlier, and production has fallen month by month since November 19 (53100 nickel tons). National nickel pig iron production is expected to continue to decline in April compared with the previous month. Moreover, the recovery of the short-term supply side is uncertain for the time being, and there is still room for nickel to rise.

The black system rose collectively. Thread supply and demand is strong, the latest steel plant scheduling data show that production may rise and downstream demand in the rapid recovery, the continuous recovery of the daily trading volume of mainstream traders has restored market confidence. And the previous decline in scrap has recently stopped the decline and even began to rebound. As for iron ore, with the arrival of Australia and Pakistan in Hong Kong, there has also been a marked recovery, with the main contribution coming from Australia. Port inventories accumulated slightly after a continuous decline. However, the volume of port opening has fallen, mainly due to the large inventory of steel mills in Shandong, and the general demand for replenishing warehouses.

Crude oil rose 0.58% in the previous period. The world's largest oil producer has reached a historic agreement. After a week of bilateral teleconference and a videoconference between the OPEC+ Alliance and G20 ministers, an agreement was finally reached to deal with the impact of the outbreak on oil demand. While the deal is unprecedented, it is not enough to boost oil prices. The cuts in supply cannot offset the massive oil glut caused by the epidemic. Us oil tumbled 20 per cent last week, and Brent crude futures fell more than 7 per cent. 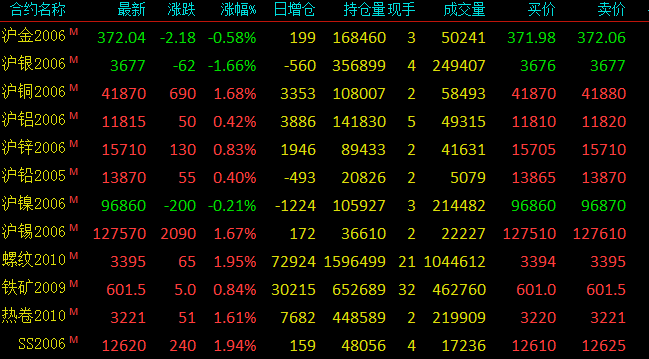 The mainstream transaction of zinc ingots in Tianjin market was 15940-17310 yuan / ton, and that of ordinary brands was 15940-16020 yuan / ton. The contract for 2005 rose from 250yuan / ton to 300yuan / ton. Compared with Shanghai market, Tianjin market rose from 140yuan / ton to 190yuan / ton. Today, the Shanghai zinc high shock, the spot market once again up the discount quotation, the quotation is more unified, the ordinary brand red Ye lark reported in the 05 contract to rise the water 260 yuan / ton near, the fourth ring newspaper in to the 05 contract rises 250 yuan / ton, Chihong spot market has few quotes, the high price brand Zijin to the April contract quotes 300 yuan / ton near. Today, traders continue to raise their discount quotations, mainly due to the poor shipments of smelters, resulting in less goods in circulation in Tianjin spot market, less or even no goods available, resulting in increased willingness of traders to offer prices. Downstream, downstream consumption in April than earlier improved, zinc prices rebounded today superimposed higher discount level, downstream willingness to take goods weaker than last Friday, the spot market as a whole trading in general. Overall, today's deal was weaker than last Friday. The transaction of zinc ingot is near 1589015970 yuan / ton.

Guangdong zinc mainstream transaction in 15630-15720 yuan / ton, the quotation focused on Shanghai zinc 2005 contract discount 10-20 yuan / ton, Guangdong stock market than Shanghai stock market discount 10-20 yuan / ton than the previous trading day expanded by 20. In the first trading period, the morning shipper was relatively active, and the quotation was mainly 5-10 yuan lower than the net price. Traders received the goods at lower prices, and a small number of transactions were concluded in the market. Kirin, Mengzi, Huize and Tiefeng quoted prices for Shanghai zinc May contract discount of 10-20 yuan / ton. In the second trading period, there is a stalemate between supply and demand in the market, some traders purchase quotations are low, but the shippers are not willing to ship, the downstream just need to purchase, the demand is limited, the market trading is still general. Kirin, Mengzi, Huize and Tiefeng offer 10-30 yuan per ton for the May contract. Qilin, Mengzi, Huize, Tiefeng mainstream transaction in 15630-15720 yuan / ton.