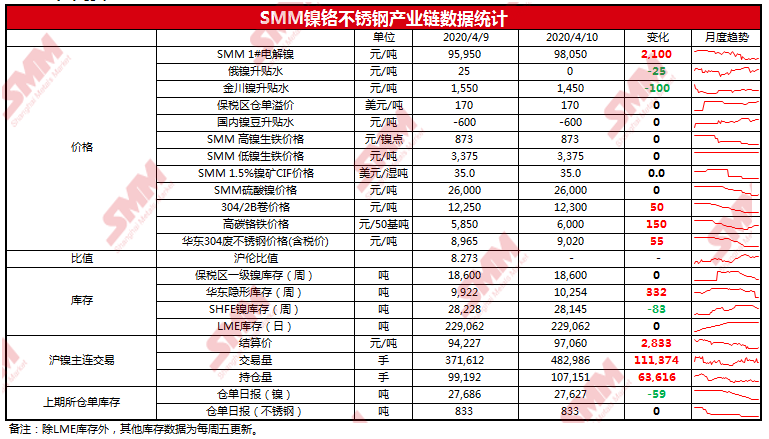 Macro: it is reported that allies such as the Organization of Petroleum Exporting countries (OPEC) and Russia (OPEC+) agreed on Sunday to implement record production cuts to support oil prices, saying they had reached an unprecedented agreement with other oil producers, including the United States, to reduce global oil supplies by 20 per cent. According to the draft statement, OPEC+ expects global production cuts to exceed 20 million barrels per day, equivalent to 20 per cent of global supply, effective May 1.

The US consumer price index (CPI) fell by the biggest monthly rate in more than five years in March, and CPI is likely to fall further in the future as the new epidemic suppresses demand for some goods and services and offsets price increases caused by supply chain disruptions. The people's Bank of China released financial data for the first quarter. At the end of March, the M2 balance of broad money increased by 10.1% compared with the same period last year. In March, RMB loans increased by 2.85 trillion yuan, an increase of 1.16 trillion yuan over the same period last year. The scale of social financing increased by 11.08 trillion yuan in the first quarter, of which RMB loans to the real economy increased by 7.25 trillion yuan. In March, new credit and social finance hit new and historical highs respectively, speeding to hedge the negative impact of the epidemic. However, from the point of view of the data structure, the financing demand of the real economy has not really recovered. Central bank officials also said that the macro leverage ratio can be allowed to rise in a certain period, and the subsequent central bank is still expected to introduce further cuts in precision and policy interest rates to help the economy. The central bank's open market this week had a maturity of 200 billion yuan in MLF, with no positive repurchase, reverse repurchase and central bank ticket maturity. The central bank cut the target rate of small and medium-sized banks by 1 percentage point in April and twice on April 15 and May 15, with each reduction of 0.5 percentage point, releasing a total of about 400 billion yuan in long-term funds. [Lido]

Nickel spot: last week's transaction situation has weakened compared with the previous week, on the one hand, because most of the downstream has just needed to stock before the Qingming Festival; in addition, nickel prices have been rising for days, downstream fear of high cautious pick-up, transactions are mostly the flow between traders. Last week, the rising water of Russian nickel did not change much. The contract between Russian nickel and Shanghai nickel 2005 was overstated between 50 yuan / ton and 100 yuan / ton. Although the nickel price rose, traders were less willing to lower the price of rising water. Jinchuan Nickel to Shanghai Nickel 2005 contract week reported in the rising water 1400-1700 yuan / ton. Within the week, Jinchuan Company arrived in Shanghai one after another, long Association traders actively received the goods, other traders through the market circulation to replenish the warehouse, but the demand of terminal manufacturers is weak, so Jinchuan nickel rising water with the rise of nickel prices, and continuously reduced to 1400-1500 yuan / ton. At present, as the ex-factory price rise is still high, and the rise of 1400 yuan / ton is already the biggest profit for the holder, it is expected that the short-term spot market Jinchuan nickel rise will not be further reduced. Nickel beans to Shanghai nickel 2005 contract reported 500 yuan / ton, because there are no nickel beans import in the near future, domestic supply is scarce, at the same time, the economy of nickel beans relative to nickel plate is not high, and the downstream demand is also weak. [bearish]

Nickel pig iron: with the rise in nickel prices, the deadlock in the nickel and iron market was broken last week, and major steel mills purchased one after another. The purchase price of high nickel pig iron in a stainless steel factory in East China on Friday broke through the 900 mark to 910 yuan / nickel point (including factory tax), and stainless steel prices also rebounded this week. It is expected that the price of high nickel pig iron may continue to pick up slightly this week, but the room for increase is limited. The expected operating range is 885-900 yuan / nickel point (including factory tax). [Lido]

Nickel mine: at present, the nickel mine market is in a state of no market, and there is almost no supply in the market. There is a hidden upward trend in the price of negotiation, but whether it can rise substantially or not still needs to pay attention to the acceptance degree of the downstream nickel and iron plant. [neutral]

Stainless steel: the price of 304 cold rolling in Wuxi area was basically stable last week. After a slight drop of 50-100 yuan / ton at the beginning of the week, due to the rise of stainless steel futures contract and the news of superimposed single sealing plate of stainless steel factory, the price of stainless steel was slightly raised to explore the market. 304 cold rolling coil price was quoted at 12150-12450 yuan / ton; 304 hot rolling weekly average price was slightly reduced by 50 yuan / ton, cold and hot rolling price difference was improved. Traders said that the overall trading situation last week is general, the current market supply is still on the high side, the steel mill shutdown measures on the market impact is limited, prices will not have a big increase. Due to the large loss of the previous period, some traders have reduced the order quantity and changed to the spot order mode. [Lido]

On the inventory side, according to SMM research, the total nickel inventory in Shanghai on April 10, including the previous warehouse receipt inventory, increased by 249 tons to 57000 tons, an increase of 0.44 per cent over the previous week. Domestic stocks (except bonded warehouses) are about 38400 tons, including about 2200 tons of nickel beans and 36200 tons of nickel plates. Inventories fell 83 tons, or 0.29%, this week. The outflow rate of warehouse receipts in Shanghai slowed down, and a small amount of Bofeng nickel was stored in Wuxi. Hidden stocks in East China increased by 332 tons from last week, Jinchuan nickel arrived this week, superimposed spot transactions weakened this week compared with last week, inventory outflow slowed, recessive inventory in and out of warehouses recorded a small increase; refined nickel stocks in Shanghai bonded area 18600 tons, flat from last week, due to the impact of the foreign epidemic, almost did not arrive in Hong Kong this week, and nickel plate bills of lading are expected to arrive in mid-April. [neutral]

Nickel price judgment: in terms of fundamentals, the reduction in production of nickel mines in the Philippines is more clear on the reduction of supply, and the price of nickel pig iron has become stronger. However, SMM believes that the price of nickel pig iron and ferrochromium is strong, will aggravate the cost pressure of stainless steel plant in April, stainless steel due to inventory pressure price is difficult to improve, the cost end price rise will aggravate the loss, April and later period still do not rule out the possibility of stainless steel production contusion demand, so the technical rebound repair of nickel price, mainly depends on the macro repair and the high decline of the global epidemic. SMM predicts that after breaking through the 20 antenna, Shanghai Nickel may have some upward space to take advantage of the macro recovery, 93000-100000 yuan / ton, and the top of the Lunni K column is facing the middle rail pressure of the Boll line, 11300-12000 US dollars / ton.

The LME Exchange will be closed for two days during the Easter public holidays in the United Kingdom on April 10 (last Friday) and April 13 (today).