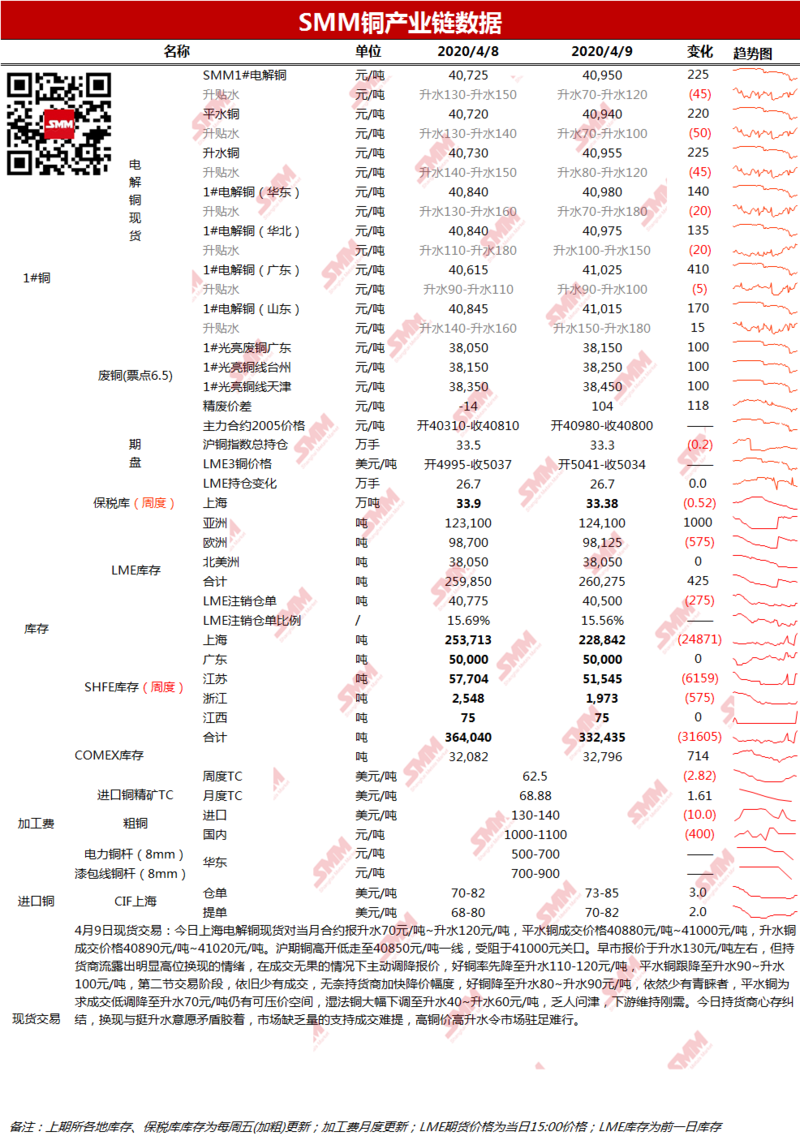 [4.10 SMM Copper Morning meeting Summary] Macro aspect: 1) Saudi Arabia and Russia ended the oil production reduction war and reached a deep consensus on production reduction. OPEC+ statement: OPEC+ confirmed that production will be cut by 10 million barrels per day from May 1, 2020 as the first round of production reduction for a period of two months, accounting for 10% of global supply [Lido] 2) Federal Reserve Chairman Colin Powell: will use lending instruments until the United States is on the road to economic recovery. The Fed will take steps to provide up to $2.3 trillion in loans. [Lido] 3) EU finance ministers have agreed on a response to the epidemic worth more than $590 billion, although final approval by EU leaders is still required. [Lido] fundamentals: 1) Copper concentrate Minmetals Resources declares force majeure in the supply of the Las Bambas copper mine in Peru. The reason is that Peru imposed a blockade to combat the spread of Xinguan pneumonia. When an enterprise is unable to perform its contractual obligations due to circumstances beyond its control, the enterprise will declare that it has encountered force majeure. [Lido] 2) the price difference between scrap copper and scrap copper yesterday was 104 yuan / ton, with a vote point of 6.6%. The epidemic in the United States is expected to peak, as well as further unsealing at home, boosting macro sentiment, the willingness of businesses to hold goods to be increased or to receive goods has increased, and the tight supply of domestic scrap copper will not change much in the short term. And as imports of scrap copper are blocked, there is also growing pressure on the supply of scrap brass. [Lido] 3) imported copper suffered an import loss of around 100 yuan / ton yesterday. The market transaction situation is slightly warmer than yesterday, but the overall situation is light. On the one hand, the number of incoming bills of lading has been digested quickly in recent months. Due to the good import price comparison and the expectation of tax reduction, the seller still has confidence in the spot price, the willingness to raise the price does not decrease, and the quotation continues to rise. On the other hand, the buyer's enthusiasm for inquiry has improved, and the whole is still afraid of waiting to see. At present, the overall foreign trade market is optimistic, and there is a small upward space for prices in the short term. LME copper inventory increased, foreign contango structure expanded, compared with the domestic spot price is strong, the price comparison is still possible. It is expected that the pressure on overseas inventories will be released to the mainland in the later stage, and the supply of goods to Hong Kong will increase further in May. At that time, the easing of supply and demand tensions may push down the premium. [Lido] 4) inventories LME copper stocks increased by 425 tons to 260275 tons on April 9, while copper warehouse receipt stocks in the previous period decreased by 5079 tons to 187200 tons. [neutral] 5) spot East China: on the spot side, the performance of spot prices fell today, and it is expected that some of the lower prices will be attracted to buy goods, and it is expected that the activity of the spot market will improve significantly, and high shipments of holders are expected to be positive, and spot quotations are expected to be raised. Today's copper closed for one day because of Easter, Shanghai copper is expected to 40300-40800 yuan / ton today. Spot water 80-120 yuan / ton. South China: Guangdong electrolytic copper spot contract rose 90% to 100% yesterday. In the spot market, although the rate of arrival has increased and the speed of going to the warehouse has slowed down, the holders still insisted on high water delivery in early trading, and the market situation suddenly changed around 10:10. Affected by the sharp drop in Shanghai rising water, Guangdong also has big traders who began to ship a large number of goods, especially warehouse receipts thick board goods, prices down, and flat water copper prices also fell slightly. Overall, as delivery approaches, the atmosphere of rising water in the market has declined, and it is expected that rising water will fluctuate and fall in the future.

Copper prices and forecasts: copper closed at $5032 a tonne last night, up 0.19 per cent. Copper prices rebounded in the shock last night and returned to the top of the daily moving average at the end of the day. The main reason for the recent rise in copper prices is 1. Early strong stimulus policies began to release liquidity, the dollar index brushed the recent one-week low to 99.35; 2. Copper raw material supply, including copper concentrate and scrap copper shortage caused by concerns about the supply end of electric copper for some time to come. While the current demand outlook has also been hit hard, including a smaller drop in crude oil production than expected yesterday, strong support is expected below before the macro environment and the state of emergency in important supply countries are not certain when to end.